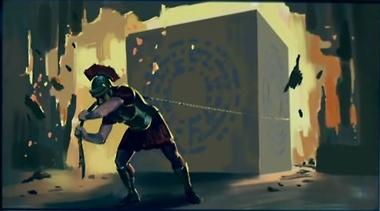 
A world power marches into the mountainous territory of a half-civilized people and quickly finds itself immersed in a quagmire of fierce fighting, guerrilla tactics, terror attacks (at one point a convoy is stopped, and flaming roadside devices are deployed).

The world power is not the United States but the Rome Empire; the territory is not Vietnam or Iraq or Afghanistan but Scotland. It is the time of Hadrian, and he is struggling to deal with the threat of the Picts, Celtish warriors who paint their faces a bright blue and who like to wield the throwing axe--an impressive weapon that can severe a limb or split open a skull, or with an additional swing fling itself as far as twenty feet to bury its bladed head in someone's chest.

Unorthodox tactics to the Roman legionnaire, whose preferred weapon was the short sword (perfect for quick, precise work, not so suited to berserker fighting). There are ample examples of both styles of combat in Neil Marshall's Centurion, his historical action thriller just released last month on DVD, and it would be wonderful to report that he makes full use of the contrast, but no--there are some intricately choreographed fight sequences, rendered halfway (but only halfway) intelligible by the somewhat frenetic editing (Marshall is no Paul Greengrass, thankfully, but neither is he a Philip Noyce, alas).

The film is basically a long chase--a group of decimated Romans tries to rejoin the rest of the Roman army while a band of bloodthirsty Picts hunt them down. Too often the hunted back themselves into absurd situations (they adopt the strategy of not taking the obvious Southward route, only to find that the Picts are perfectly capable of tracking them down anyway; when trapped they resort to the Butch Cassidy and The Sundance Kid style of last-minute escape: leaping off a high cliff into a roaring river (doesn't it ever occur to anyone that the water might be shallow?)). There's some inconsistency too: the Picts hunt hard and fast, and sometimes they feel as if they're supernaturally prescient in tracking down their Roman prey, sometimes they seem to slack off and disappear for long periods of time (it depends, you feel, on the needs of the script or the whim of the director, when it shouldn't--you should be too busy worrying about their chances for survival).

The finale is satisfyingly intricate--an abandoned Roman fort acts as setting for three different duels, happening at two different levels. The whole is too dependent, however, on precise editing to keep the fight sequences distinct and comprehensible (Marshall doesn't deliver, alas). Not bad, but not quite first class, either.

The movie does dwell on more realpolitik than is usual for action movies. The survivors are led by a centurion named Dias (Michael Fassbender) and he's not your usual gung-ho, do-or-die military officer--though he does decide to run for miles and miles and risk the lives of four or five surviving soldiers to save a Roman general. Dias has his thoughtful side, as when he says "It's easy to turn to the gods for salvation...but it's soldiers who do the fighting, and soldiers who do the dying, and the gods never get their feet wet." He confronts Etain (Olga Kurylenko), a mighty Pictish warrior-woman who wields a spear that might have come out of Liu Chia-liang's Legendary Weapons of China--Etain is a fearsome opponent and a relentless, bloodthirsty killer, but she has reasons: her family was massacred when she was a child and she herself raped, her tongue cut out to ensure her silence.

The good guys have their doubts, the bad guys their motivation; the grounds for opposition shift ever so slightly this way and that. When Dias meets Arianne (Imogen Poot, a much more gorgeous-looking actress than the name might suggest)--exile, healer, reputed sorceress--he finds plenty of reason to at least settle down, if not change allegiance; when he finally accomplishes his mission--when he in effect reaches safe haven--his very presence as survivor of a Pictish massacre is a potential embarrassment to the Roman military. Marshall does a swell job of muddying up simplistic action-movie waters (he did an equally fine job of injecting feminist subtext into his underseen horror thriller The Descent), it's a pity he didn't do more with this, substantiate the characters rather than the choreography, concentrate on the machinations rather than the manslaughter (you saw this unexploited potential in The Descent as well).

The movie is on the verge of being so good it's painful to see how close it managed to get before missing the mark altogether; you want to handcuff Marshall down in front of a desktop and threaten to withhold the key till he comes up with a really good, really thought-through script--concept pushed as far as it can go--this time around. One waits, with some interest, for his next work.