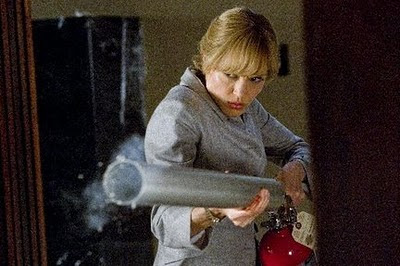 "Say hello to my noo friend."
Assault and battery
Philip Noyce's Salt is ridiculous, it's reactionary, it's over-the-top and whaddaya know, it's a lot of fun.

It has many of the virtues something like Christopher Nolan's Inception lacks--it's cleanly made; it doesn't ask to be taken as anything other than what it is, a meat-and-potatoes action flick; it's amped up not a little by the butt-kicking presence of huge-eyed, prehensile-lipped Angelina Jolie (Who I will take over Leonardo DiCaprio in a heartbeat, anytime, anywhere).
Jolie plays Salt, as in Evelyn (Not, alas, the Roald Dahl version). She apparently was captured and tortured by the North Koreans ("Give her the spicy kimchi"), eventually traded for one of their own spies (Probably boxoffice gold that the United States and Russia just recently made a similar exchange, and with a beautiful spy to boot), suspected of being a Russian double agent, and again trapped, presumably to be interrogated again.
I wouldn't know what American intelligence agencies use nowadays to persuade their prisoners to talk--Hannah Montana reruns, I suppose, played in an endless loop. The prospect might make one demand a return to the relatively more humane practice of waterboarding or, in Evelyn's case, drive her to break out of her cell, shoot her way out the building, create radical new traffic patterns in the surrounding roadways, perhaps kill the president of Russia along the way (A top agent assassinating her own president? Only in Russia!).
The whole thing is ludicrous enough to be funny, and I'm not sure the effect was entirely unintended. It's also hugely reactionary--the Koreans torture Evelyn half-naked (This is actually more disturbing than I suspect it's meant to be); they are obviously seen as brutal sadists (Not rapists? The film is firmly silent on the matter). The Russians are worse--paranoid war-mongers who do little else but cultivate deep-cover superspies and plot to provoke the Muslim world into attacking the United States. A key plot point is revealed by (ta-dah!) Fox News, and we're supposed to take this as gospel truth (it's the only stretch of logic I have difficulty believing). But this is Philip Noyce we're talking about, the director of, among other things, Rabbit-Proof Fence" (2002) and a recent adaptation of Graham Greene's The Quiet American (same year); based on all that he's not one to swallow conservative American political doctrine wholesale (he even injected a subversive undertone into the flag-waving Patriot Games (1992) and Clear and Present Danger (1994)). Noyce has got to be kidding. Right? Right?
Whatever. The movie's so cartoonish, the proceedings so lacking in pretension and flag-waving bombast that it's difficult to take offense; it's almost like protesting that Road Runner cartoons are too violent (they are, but you have to be nuts to think kids (of the right age, anyway) are in danger of taking them literally). For all we know Salt IS meant to stand for the Road Runner, a near-invulnerable character with no inner psychology (other than what fleeting glimpses we see in giant closeup of Jolie's gorgeous face) and no intention of being more than an instrument of motion--of violence dealt out with verve and inventiveness.
That said, it's refreshing--no, more than that, it's downright invigorating--to see a filmmaker do solid, old-fashioned action filmmaking. Noyce is a veteran, and a fan of clear action sequences with minimum use of the shaky-cam (when he does use it, it's for brief emphasis, as just one in a wide variety of tools). He doesn't cut the image to the point of incoherence and when he can, he uses on-camera effects (sure there's some digital work, but it's kept in one corner under a strict leash, and not allowed to dominate the proceedings). Some of his best effects are the simplest, though--a breathless interval when Salt hangs outside a window ledge; or when she's crouching behind a car, surrounded by hundreds of cops and with nowhere to go; or when a crucial pair of handcuffs is unlocked (or better yet used, with startling effectiveness). Sometimes it's the still moments and not the violent ones that have your pulse racing the fastest.
Funny but it took five years and two Batman movies for Nolan to learn to slow the action down, to use editing precisely and not incomprehensibly, to refrain from shaking the camera like a baby rattle, in the mistaken assumption that the audience would find the gesture more exciting. Noyce has been directing movies since Nolan was in grade school, and you can see his long experience in the way he shapes and stages his action--no fuss, not a lot of lingering (just the occasional slow motion to allow you to follow what's happening), and enough real-time thrills to fill half a dozen lesser action flicks. Noyce doesn't need multiple dream levels or teams of specialists or elaborate metaphysical conundrums to make his film interesting (even the plot, twisty as it is, reveals itself to have an elegant simplicity when it's fully unfolded). He serves the action straight, no ice, no chaser; you can feel it burning as it goes down the throat.
First published in Businessworld, 7.29.10
at 3:08 AM

For what it's worth, Nolan does not use multiple cameras either. Wally Pfister (his DP) shoots with only 1 Main camera and he has no B unit.

Oh, Noyce also did "Dead Calm" with a young Nicole Kidman. Orson Welles shot an earlier version of it (titled "The Deep") but never finished it because his star Lawrence Harvey died (he'd have played Billy Zane's character. Welles was the husband.)

Scorsese doesn't like to use multiple setups either, if I remember right. Difference is, Scorsese knows how to shoot action. Nolan should really either learn or do without. It's a huge flaw in his portfolio of skills.

I don't know if it's true or not, but my impression is Welles' list of unfinished films is almost as long as his list of finished work.

I remember not being entertained at all by the action sequences in this movie... I couldn't make out the damn highway sequence at all.

(John Woo did a lot better with his car stuff in HARD TARGET... which is how I wish more mindless Hollywood action movies would be made)

That said, I saw more of Tetsuro Araki's HIGH SCHOOL OF THE DEAD recently and now there's a dude who has a knack for big-budget action sequences (between buses being flipped over, flying motorcycles and high-speed bulldozers plowing through zombies, the show's staff isn't exactly showing a lack of creativity); Hollywood needs to step its game up.

Really? I thought the highway sequence was similar to the highway chase in Marathon Man, only on steroids.

Funny you should talk about John Woo. Saw Hard Boiled recently and it blows just about any action movie made this year out of the water.

Haven't seen Salt yet. But speaking of John Woo, have recently seen Har Boiled and the Killer. I think his best action sequence was at the beginning of "Hard Boiled".

How about the Woo-produced The Big Hit? it's the only Hollywood movie of him I'd say I love. Not directed by him but have his trademarks anyway. The car chase sequence was just awesome. Talk about Asian filmmakers making movies in Hollywood.

In the end, it isn't really about the action; in the end, it's the scale and grandeur of the emotions evoked. If I were to think of Woo at his height, it would be the climactic confrontation in Bullet in the Head.