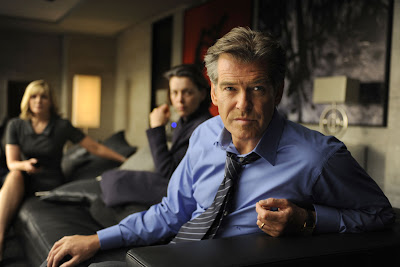 It's Tony Bl--sorry, Roman Pol--sorry, Adam Lang in The Ghost Writer
Ghost images
Deal with Roman Polanski's films and you inevitably have to deal with the issue of Polanski himself--he's an excellent example of the artist-director who does interesting to great films but whose private life, or opinions, or deeds tend to overshadow that work.
The fact is: Polanski did have sex with a minor, did plead guilty to charges of "unlawful sexual intercourse," did leave the United States to escape arrest (mind you, these are truths everyone can agree upon, but they are not the entire story--every other aspect of that is still very much in dispute). None of these make him endearing, much less admirable--for every one who remarks admiringly of his wit and charm, you can find one other (at least, maybe more) who will call him arrogant and vain. He is, to put it mildly, an extremely polarizing figure.
Worth noting he's also the most recent--D.W. Griffith was condemned for the virulent racism in Birth of a Nation, Leni Riefenstahl for championing Nazism in Triumph of the Will; Elia Kazan named names to the House of Un-American Activities, then (perhaps most audacious of all) in On the Waterfront tried to justify what he did. Speaking for myself, I dislike these people and admire their films immensely (Griffith and Riefenstahl in particular); regarding them and their works is never a comfortable activity.
Possibly the most clear-eyed view of his situation comes from Polanski himself. The central figure in his latest work The Ghost Writer (not to be confused with the Philip Roth novel) is former British Prime Minister Adam Lang (a brilliantly droll Pierce Brosnan), exiled in the United States because he's wanted by the International Criminal Court in Hague for war crimes. Lang is confident, charming, massively self-centered; scratch the suave, good-looking surface, however, and you find a self-righteous conservative with a messiah-martyr complex; scratch that, and there's just a hint of the transplanted stage actor, suffering from an acute sense of inferiority. It's a wicked parody of Tony Blair, of course, complete with a seductively persuasive motive for falling in line with Bush Jr.'s Iraq War project (are we sure author Robert Harris--on whose novel The Ghost this film was based--plucked this notion fully formed from his forehead, and not from some Deep Throat source?).
It's also a wicked parody of Polanski, a celebrity in exile surrounded by supporters and admirers. Like Polanski, Lang is a fugitive from justice; like Polanski he either has no comment or a carefully prepared reply whenever he's asked about the crime. Is Lang guilty? His conversations with his people are revealing--not "How can they accuse me of this?!" so much as "How is this or that going to look? What's our next move?" The film saves the answer--is he or isn't?--for towards the end. The ghost (Ewan McGregor, suitably inscrutable) confronts Lang with the question; as with any noir thriller, the protagonist (McGregor's character is so retiring, so diminutive in stature he can hardly be called a hero) has to look into the eyes of the accused and ask, point blank; he has to know. To Polanski's credit as artist and filmmaker, he allows Lang (allows himself, in effect) a totally candid answer--the truth (but not, as it turns out, the entire truth).
If Lang is mostly ego with a trace of insecurity, the ghost is mostly uncertainty with a suggestion (perhaps powerfully repressed, perhaps a last remaining vestige) of ambition ("Don't you want to be a real politician?" "Don't you want to be a real writer?"). As McGregor plays him he's a mirror image, not just of Lang but of Polanski; not the famed filmmaker but the cunning survivor, the Polanski that escaped the Krakow ghetto in his childhood, fled to France when he knew the Los Angeles judge was about to reneged on their agreement. There's something of the lowly worm about McGregor's ghost, just as there seems to be in Polanski--both are determined to do whatever necessary to keep out of harm's way, both are not above stealing whatever pleasure they find offered or readily available (from a willing wife, from a wannabe nymphet).
A wicked parody, not just of Polanski, but of his story, his--and as implied in all his films, our--entire situation: man in exile wanted for a crime committed years ago. If said story is told with grace, wit, and a diabolically seductive sheen, why, one can't imagine Polanski telling it any other way--far as I'm concerned, this is one of the best films to be released this year. Which figures--like any decent specter worth his weight in ectoplasm, Polanski refuses to be irrelevant, or mediocre, or easy to ignore. He refuses to fade away.

The director in his imaginings even hazards a guess as to what his end might be like in Lang's ultimate fate (just as random, just as absurd): a confrontation with the vengeful parent whose child he once harmed. You see it in Polanski's expression, whenever a camera happens to snap his photograph: a combination of intense annoyance that it's a camera, and absolute relief that it is only a camera. If fate were to arrange for his destiny to catch up with him, I have the feeling that Polanski wouldn't be surprised, not one bit.
Article first printed in Businessworld, 8.5.10
at 6:59 AM

Didn't know where to leave a comment on it, but Satoshi Kon just passed away...

Not a big fan but he did good work. And as Dodo Dayao keeps saying, that work is better than anything Chris Nolan ever pout out...