Ninanais (Refrains Happen Like Revolutions in a Song, John Torres, 2010) 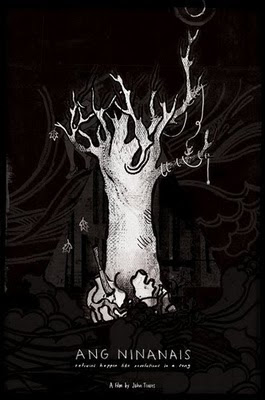 Do not look for us in history or in books written by victors. They are exact and precise; we are uneventful and in between.

Do not look for our story in myths, apparitions, legends filling the gaps. They are bridges; we stretch and fall. Listen to our faces; don't take our words. Our romance lies at the timbre of our voices.

In the end we will reject a revolution and arrive at love.

The words set the tone of the film, suggest what the film's about: not history or historical figures but the everyday people that make up history; not heroic myths or legendary epics but personal, intimate stories. The words even suggest how we should view their story and, in effect, the film: not as a literal, straightforward narrative but as a series of moods, images, metaphors, connections, to be made by heart and intuition, not logic (anyone looking for cause and effect in this picture will come away sorely frustrated).

After all is said and done though, there is a story; matter of fact, there are about three. It's about Nagmalitong Yawa, the beautiful maiden who disguises herself as a man and descends into the cavern named Kurundalan to free her imprisoned love, Humadapnon. Actually, this story (only the first part of an epic tale) is told by the binakod, beautiful maidens chosen when young by the Sulanon tribe in Panay to be set aside (the word 'binakod' literally means 'reserved') to learn the Hinilawod epic--their love story is her lifelong task.

It's also the story of Sarah, who is looking for Emilio, who she has only met in her dreams; it's her last day as a debt collector, and she is making the rounds of the town of Guimbal, meeting with different people to settle accounts. At one point she is crossing a river--children see her, think she's walking on the water's surface, and mistake her for Nagmalitong Yawa. When she approaches her next debtor he immediately hands over his money, no fuss, no bother (we see her in the distance crossing the river, and for all you know she is walking on top of the water, she is Nagmalitong Yawa, an elemental seeking her lost love--it's this kind of offhand yet evocative imagery that Torres seems to be able to throw up on the screen, time and time again).

Sarah goes on to talk to Tatang Guillermo, who has mistaken her for his long-dead daughter, giving rise to yet another story: that of General Guillermo, leader of the Voluntarios, and General Tan Martin, leader of the Revolucionarios, two rival factions fighting for national independence against the American colonialists. Guillermo lost heart ever since his daughter Lyn died, and in Sarah he seems to have found her again, albeit in a different time and age.

Torres follows these storylines in and out, crossing and uncrossing in a complex weave, a mix of history, myth, personal reflection. He marries these stories and the occasional recited poem to images that, again, follow the opening lines in urging us not to follow the words, but instead listen to the timbre of our voices. We don't see faces so much as profiles, don't follow people so much as knees, elbows, backs of heads; like Robert Bresson, Torres doesn't seem to want to view people in the classic Hollywood manner--either close-up or in long shot, with faces front and center--but instead glimpse them sidelong, from skewed, puzzling angles. We're kept constantly on our toes, aware that we don't know who this is or what exactly is going on, while Torres grudgingly feeds us details, hints, clues.

Torres, by the way, does more than throw sidelong glances at his performers--he changed the names 'Sulanon' and 'binakod' from the original 'Suludnon,' and 'binukot,' taken historical names such as General Guillermo and General Tan Martin, and invented historical details about them as well. Why? Why--why not? If you've been following his opening adage, you shouldn't be listening to his words too closely, but instead to their faces, to 'the timbre of their voices;' you should be paying attention not to precise facts (which are half-fabricated anyway), but the stories of ordinary lives.

Torres' words (despite his advice not to heed them) at times can be hilarious--as when Sarah describes a dream in which her legs and womb fly off and end up wrapped around a tree (Freudian symbolism, anyone?); his images at times can be threatening, as when intimations of war are spoken, and we see boys in dusty provincial streets selling huge, heavy blades, steel gleaming in the bright sun, of a heft and length and sharpness perfectly capable of lopping off a tree branch, or even a few human limbs. Torres seems to have developed a look; handheld and at times out-of-focus, with a bright palette of colors, the film has the feel of Super 8 footage being played on an ancient projector. Funny how the medium seems to be the default metaphor for old memories, how the blurring and unsteady ratcheting immediately suggests fading recollection. The film is obscure, yet feels somehow precious--like someone had found the rolls in a dusty cabinet locked away in the forgotten room of an old hacienda, lost inside a coconut grove; you thread the film into a projector, throw the switch, watch the flickering light open up the door into a world of ghosts.

Torres' films are intensely personal; the fact that he recites the narration in almost all his films make them so, even if you didn't know that was his voice. It speaks quietly, almost whispers to you, as if Torres were beside you reciting into your ear. This gave his previous films--Todo todo teros (2006) and Taon noong ako'y anak sa labas (Years When I Was a Child Outside, 2008)--a confessional quality, the sense that Torres was cracking open his cranium for you to examine closely. Ninanais operates at a more ambitious level--history and mythology mediated through Torres' elliptical, inimitable filmmaking style. The title is of course a play on Nick Deocampo's film Revolutions Happen Like Refrains in a Song (1987); where Deocampo refers to the circular nature of history, possibly Torres refers to the tumultuous effect--emotional, social, and political--melodies can have on our lives. At one point the possibly fictional Emilio declares that all wars are a story of love, echoing what had been said earlier and suggesting that the film doesn't so much end as it does arrive at its beginning and starts again, revolutions and refrains going round and round, ceaselessly. A difficult film to watch, yet unspeakably beautiful; needless to say, it's easily one of the finest I've seen this year.

Ninanais will be shown at the Cine Adarna Screening Room, August 25 at 7 pm.