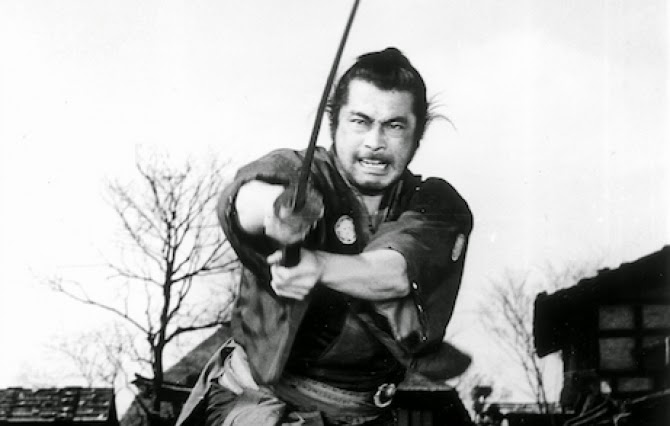 Yojimbo (1961)—about a wandering super-samurai (the late Toshiro Mifune) who cleans up a lawless town—is supposed to be Kurosawa’s comic masterpiece, but it’s easy to overlook that fact. The film is overwhelmingly grim, dealing as it does with violence, murder, and wholesale genocide. In the opening sequences, Kurosawa swiftly establishes a mood of threat and sudden danger—a dog walks by with a human hand in its jaws; minutes later someone’s entire forearm is chopped off, and presumably the same dog will carry away the even bigger trophy. The only clues Kurosawa allows in the picture suggesting that the whole thing is really a comedy are the bouncy, sardonic music and the editing, the kind of precisely timed cutting you find in slapstick, or in great silent comedy.

I can talk endless trivia about Yojimbo: that George Lucas lifted the limb-chopping sequence for his Cantina scene in Star Wars (where Obi-Wan Kenobi (poor Alec Guinness, no Lucas fan yet eternally grateful in spite of himself for the money) makes a disarming reply on behalf of his protégé, Luke Skywalker (Mark Hamill)); that in one scene Kurosawa hired a knife-thrower to actually skewer a flying leaf; and that in another the director pokes fun at serious control freaks like himself (villager: “Did you write the script for all this?” Mifune: “No, only about half; the rest was improvised”).

I could add many other details, but I’ll confine myself to just two: first, the film is one of the most superbly photographed comedies ever made, with wide-screen images that satirize and at the same time surpass the Westerns that inspired them (unfortunately, the Japan Foundation print was screened without anomorphic lenses, badly squeezing the picture); second, that a slew of other movies arguably resulted from this film: a sequel--Sanjuro (1962)--the title of which is the name of Mifune’s character; Per un pugno di dollari (A Fistful Of Dollars, 1964), Sergio Leone's spaghettie western classic introducing Clint Eastwood; and Last Man Standing (1996), Walter Hill's dour gangster-western starring a glum Bruce Willis.

None of them operate on the same level as Yojimbo. Sanjuro is perhaps more exuberant and more sheerly entertaining, but it’s also more light-weight; Yojimbo is a satire on violence, on the men that cause violence, on the machismo that drives men to violence, and on the movies made about these men of violence. More than satire, the film has scenes of destruction and wholesale slaughter that equal anything done by Sam Peckinpah, D.W. Griffith, or Kurosawa himself. The devastation gives the satire real teeth, the same time the satirical attitude gives the devastation a stinging moral point.

Mifune embodies Kurosawa’s concept in a way no action super-hero has ever done before or since, Schwarzenegger, Stallone and Willis notwithstanding: he plays to perfection a man of absolutely no morals. More than anyone else in the film, Mifune’s Sanjuro understands the way the world works: kill and manipulate, and you profit by your actions; help others, and you can only be punished for your mistake. No wonder he’s reluctant to help a kidnapped mother and her husband; he knows that a conscience is a foolish indulgence, and he’ll only get beaten for his efforts.

Kurosawa once said this was how he sometimes saw the world, and in films like Ikiru (1952) and Akahige (Red Beard, 1965), he fought against this point of view. But there must have been one moment in life when he gave in to this all-too-clear-eyed view, and Yojimbo was the result. Kurosawa’s vision is so scathingly honest, his means of immersing you so immediate and intense the only response to all this heightened, stylized violence is laughter--a bitter laugh, a derisive laugh, despairing and at the same time defiant; the kind of laugh you fling at Death when looking him in the face. Yes, on final analysis, Yojimbo is a comedy, if only because it moves you to laughter almost as often as it moves you to horror; it is, in fact, one of the greatest black comedies ever made. 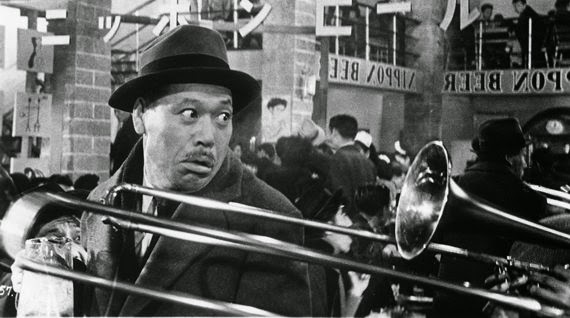 Ikiru (1952), on the other hand, lies at the other end of the emotional spectrum. If Yojimbo is so hopeless it’s hilarious, Ikiru is so hopeful the laughter dies in your throat. The film’s reputation varies according to which film critic you talk to; Pauline Kael watched it and concluded that “the meaning of life was doing a bit of goody good-good for others.” A far more square critic like Roger Ebert will come away from the film writing—well, it’s hard to remember anything Ebert writes; all I can recall are the four stars he hung on the movie, like a medal for good behavior.

Whether you buy the high moral seriousness or not may depend on whether or not you still believe in the possibility of goodness (or, for that matter, Santa Claus). It’s a question of temperament, I think, and if I were pinned to the floor with my arm twisted behind me, I might admit to still believing in such—but only the way Kurosawa and his like might depict it; anything else should be laughed out of the room.

The story’s premise is simple—a man named Watanabe (Takashi Shimura) learns that he has six months to live; he panics and tries to put some last-minute meaning into his life. It’s the basis of so many soggy “heartwarming” movies (Dudley Moore in Six Weeks; Michael Keaton in My Life; Tom Hanks in Joe And The Volcano) you might argue, with some justification, that it constitutes a previously unrecognized genre—the “condemned man” weepie.

What lifts the film above all these later, lesser efforts—what, in effect, makes the picture great—is Kurosawa’s way of working out the story. Ikiru begins in the manner of a classic 19th century novel, with an all-around portrait of Watanabe. The first shot in the film is of an x-ray of his innards—we see the man’s cancer even before we see his face. Then we see, in a series of brilliantly edited flashbacks, where he comes from—his wife’s death, his son’s growing-up, the gradual shriveling up and drying out of all dreams and pleasures in his life (“for the sake of my son,” he says), so that what remains prompts fellow office workers to nickname him “The Mummy.”

When Watanabe realizes he’s doomed, he rebels; he goes on a series of drunken binges around Tokyo. Kurosawa shows Watanabe’s swift dissolution against a background of scintillating mirrors, sweeping spotlights, flashing neon signs; the city around him is all sound and movement—pleasure-seekers drinking, dancing, laughing out loud; sequinned and feathered creatures move through the thick cigarette haze, like gaudy goldfishes in a huge cloudy aquarium.

It’s as apocalyptic a vision of night-time Tokyo as any put on screen, but what commands your undivided attention—what relentlessly draws your eyes—is the still, silent figure of Takashi Shimura as Watanabe. Shimura spends most of the film bent over double, like a kowtowing seven (the position helps relieve abdominal pain); his protruding lips and bulging eyes give him the look of a flounder (you think of that huge aquarium) gasping for air.

Shimura plays Watanabe with laser-beam concentration; he gives us the sense of a man wildly groping about for something to keep him afloat. When Watanabe finds that something, he clutches it with startling ferocity—his flounder eyes snap into focus, his bent-over body points, like a huntsman’s dog, towards a single, purposeful direction.

Midway through the story Watanabe dies and the film shifts gears: it begins to resemble that most famous of all great films, Citizen Kane (which Kurosawa claims he never saw prior to making this picture). Like Kane, there is a postmortem investigation; like Kane there is a final revelation that once in for all sums up the man—or fails to sum him up, depending, as I’ve noted before, on your temperament. Where Ikiru differs from Kane is in the style of progression: Kane is one cinematic flourish after another, its images piling up and igniting, turning into a great cloud of smoke; Ikiru starts out as a relentlessly intense portrait of a man’s final days, then slows its momentum—gradually, gradually—until it comes to a full stop.

Ikiru’s climax is simplicity itself: a shot of Watanabe sitting on a child’s swing and singing. Everything that has come before—the brilliant flashbacks, the spectacular night sequences, the intricately woven investigation at the wake—has led up to this. It’s a measure of Takashi Shimura as an actor, and of Kurosawa as a filmmaker, that the moment does not disappoint; it’s a measure of Ikiru as a film that the moment—a sublimely simple moment—is possibly one of the most moving images in the history of cinema. 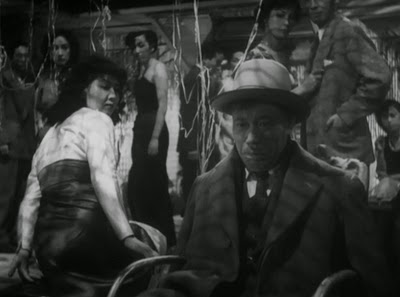 Ah, two great films, though I've seen "Ikuro" just once, it sure did work on me. But then, I do still believe in Santa Claus (and I'm a way past 21 secular Jew). And I'm probably a bigger square than Ebert, who I fully expect to come down my chimney and deliver me free DVDs on Oscar night.

Actually, another excellent example of a really terrific "condemned (wo)man" film is Isabel Croixet's "My Life Without Me" starring Sarah Polley as a young mother who learns she's dying and, not being a fan of sloppy sentimentality herself, she decides not to tell anyone. I actually only saw this because I had an odd job working on the captions and, even though I was working, just trying to sort of proofread the thing...well, let's just. I'm just glad no one walked in on me must then. (By which I mean I was crying. Get your mind out of the gutter.)

Of course, the reason it works is it's not trying to force us into any particular emotion. One thing I've found is that I almost no feel tearful when I'm watching characters cry. It's when they're smiling or being noble that I become a total bonehead.

Yikes, six years past and I haven't replied to this. Bob Aulert? Bob Wake? Thanks for the kind words, and I'll try look for that Croixet.