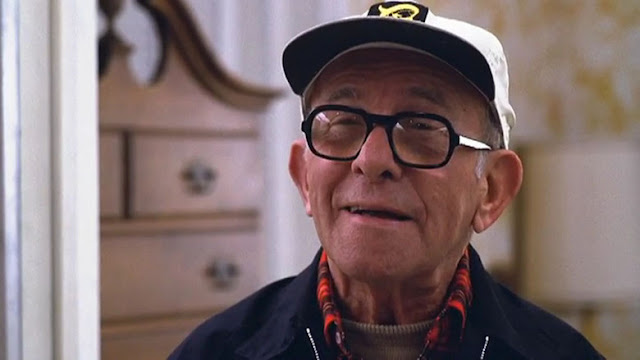 (This is part of the Comedy Blogathon)

In this age of high-concept comedies (sometimes yoked to an action-oriented plotline for more value per ticket-dollar spent) and semaphoring, elastic-faced comedians, going back to a modest, semi-forgotten little comedy like Carl Reiner's Oh God! can literally be, well, a godsend.

Made back in 1977 from a novel by Avery Corman (who also wrote Kramer vs. Kramer, the movie adaptation of which became a rallying point for middle-class single fathers) and adapted for the big screen by Larry Gelbart (Tootsie, the MASH TV series), the movie was an agreeable little entertainment that presented God (who was much more Jewish in the novel) as an agreeable little old man trying to get a message across--and maybe earning a laugh on the side.

The picture keeps a firm foot on the ground, always suggesting more than it shows, always creating its comic effects with a minimum of effort (you should see the reactions Reiner gets from an elevator door opening and closing, opening and closing). It's a resolutely middlebrow comedy--basically God as a 70's poster writer, doing sunny one-liners that don't really offend anyone--but Reiner's direction is such a model of simplicity and restraint and grace one can't help thinking "we can use more of that." You only have to endure, oh, Bruce Almighty and its even less funny sequel, or Apatow and his overaged virgins and geeky impregnators to realize just how different Reiner's film really is.

And it's not as if Reiner doesn't show any visual inventiveness. He opens the movie with an intriguing white glow--you spend most of the opening credits wondering just how he achieves that pearly glow. His camera pulls back to reveal an egg, and that's the picture's theme in a nutshell--look at the world no matter how humdrum and dull from a slightly different angle and it becomes an object of wonder. Later, when Jerry is intimidated into attending an interview with the Lord he enters a room with the same pearly glow--Heaven, Reiner suggests, has a limitless supply of white vinyl paint and industrial-strength Mr. Clean. Oh, Warren Beatty will adopt a similar featurelessness for his hereafter in Heaven Can Wait, released the following year, but I like to think Beatty's bigger-budgeted, more terminally tasteful and ultimately less funny metacomedy took its cue from this smaller picture.

But Reiner's funniest moments are based less on some mildly radical take on the afterlife and more on Burns delivering Avery Corman's (via Larry Gelbart) jokes with a soft-spoken approach. "Did you know that Voltaire probably got me right?" God (George Burns) informs Jerry Landers (John Denver), his would-be prophet; "He says 'God is a comedian playing to an audience too afraid to laugh.'"

For a veteran like Burns, who at that time had been performing in showbiz--radio, TV, stage, film--for something like 74 years, such an uptight audience would be anathema; he works on them patiently, prying a chuckle out of them, maybe even a giggle, building on scant material for a decent laugh, maybe even a guffaw. The movie would be unthinkable without Burns--Mel Brooks, an early choice for the role, would have probably played Him like a Borscht Belt professional out for scalps. Burns has a far lighter, quieter and in his way more effective touch--you can imagine him shuffling into the room holding an empty satchel bag, greeting everyone, complimenting all the pretty girls, puffing on his trademark cigar, and before anyone has even noticed, shuffling right back out with everyone's wallets in his satchel.


Burns' late life persona always depended on this scrawny little old man outsmarting everyone in the room; lift that joke to a cosmic level--at the same time keeping everything to visibly human, even everyday, proportions--and you gain something, not quite sure what. But no, I do know--a divinely empowered Burns, shuffling out of the room with a bag full of wallets.

Burns is surrounded with a royal flush of comic performances--David Ogden Stiers as an exasperated produce manager; William Daniels as an even more exasperated district manager; Paul Sorvino, near-unrecognizable as a bullying Bible-Belt reverend (I remember how Anthony Hopkins on the set of Nixon (1995) admitted that Sorvino (who did a spot-on impersonation of Henry Kissinger) played Nixon better than he ever could), and Ralph Bellamy, the very picture of pompous, self-righteous villainy, as the reverend's high-powered lawyer. Not to mention Reiner himself, appearing on the Dinah Shore show and giving a fifteen-second impression of The Picture of Dorian Gray.

Can't write about the film and not mention John Denver--he's not an actor and it shows, and that's not meant as a snide comment. Denver is such a relaxed and easygoing presence you feel for him no matter what he does, even when he's yelling in exasperation at his sexy, skeptical wife Bobbi (Teri Garr, the only actress I know who can give marital domesticity considerable erotic appeal). His soft eyes and wide nose and even wider mouth denote pure sincerity (what is it with wide noses and mouths? Charles Bronson had a similar quality); compare him to more recent recipients of Divine Intervention (Jim Carrey, anyone?), and, well, who would you be more willing to believe, when he claims to have met the Almighty Himself?

More than the relentless optimism, the corny jokes (which are only funny because they're delivered by either veterans or amateurs), perhaps what speaks the most to me is the picture's sanity. It doesn't claim much for its God--He can't tell the future, and He can't affect our lives any more than to give us some poor schmuck with the message "We can do it! And He's rooting for us." It's that very helplessness and candor that's refreshing; we pray to Him day and night, only to find out that He's been seated right next to us all along, every bit as unsure what will happen next, or why. If the film were made today, the Religious Right might have a fit--probably surround the theaters with picket lines as long as those protesting Scorsese's The Last Temptation of Christ (1989--my favorite Christ film, incidentally). Well, maybe not, but I'll bet there'd at least be a dozen picketers at the boxoffice.

It isn't just God Himself, even His miracles are wonderfully mundane--a calling card that refuses to be discarded, an elevator to a floor that doesn't exist, an impossibility predicated on the steady sound of squeaky shoes--nothing that would upset anyone's composure too much, much less (as He puts it) "the balance of things." And when He does stretch--causing it to rain, for example, while He and Jerry are out on a drive--He limits the downpour to the inside of the car. "Why ruin everybody's day?" God reasons out to Jerry; if only the real article was half as tactful.
at 12:56 AM

Thanks for reminding me about this movie, which has a way of almost-vanishing only to pop up again. That's staying power, I guess. George Burns was born to play God.

I saw and liked the movie.

Just now wondering if you could do something on Americanized pinoy movies in the 50's. I was surfing Youtube on pinoy movies when I came across a few old films, e.g., "portrait of my love," and others of the same flavor -- lipsing American songs. Shook me a little bit. What's with that, I thought.

Yeah, what's with those films?

Luciano Carlos, 1965, actually. The film industry by then wasn't in good shape; the big studios were in decline, and stars were looking to independent outfits for bigger talent fees. The indies went for low production values and quickies, the big studios for tired formulas. One of the tired formulas was the melodrama with a popular American song for a title.

It's not completely representative of Philippine cinema--Gerry de Leon was doing some of his best work around this time--but it was one aspect of it.

What would you consider to be completely representative of Philippine cinema and why?

I don't know what the question means. If you mean represents most audiences, that would be whatever makes money nowadays; wouldn't know, maybe love teams. If you mean the best of what cinema has to offer, there's a list of favorite films in the blog sidebar.

Thanks for the quick reply. To be clear, I was just following up on the your reply to my first comment:

"It's not completely representative of Philippine cinema-..."

So, what film would you consider completely representative of Philippine cinema? That is to say, distinctively pinoy. It does not have to be the best or the worst - just pinoy. For example, when I see Yojimbo or the like, I'd say, Japanese movie.

Representative as typical, or one that shows all aspects of the cinema. I don't believe there is such a creature. You can come close to a typical type, a statistical mean, but you know what Samuel Clemens--sorry, Mark Twain--said about statistics. That's why I don't believe in awards, or aggregate lists.

I don't consider Yojimbo representatively Japanese either--Kurosawa borrows heavily from Ford, among others, and the inspiration for that particular film is Red Harvest, by Dashiel Hammett. A 'purer' kind of Japanese filmmaking, if you like, would be Yasujiro Ozu's--but pure as against what? Chambara films, which are very popular in Japan, are also a part of Japanese pop culture, and Yojimbo despite its Western sources is a prime example of that genre.

The thing though is that Kurosawa, whatever it was he borrowed, imitated or copied, he made Japanese!

Naturally, I don't think this critically when I watch a movie, unless it is brought to mind or when I know I am watching an obvious gaya-gaya movie like those James Bond secret agent or lipsing "pinoy comedies."

"Pinoy comedies." Hehehe, what is that? It seems like a parody of how life is like in the PI. If movies reflect culture, hopefully, this is not what a representative pinoy movie is. But, as you might put it, a part of it.

What are "obvious, gaya-gaya" movies? Dolphy does a parody, Tatay Nick, is it a low form of borrowing from the movie Titanic? I actualy prefer Dolphy's parody.

And it's not like the Japanese don't do their own form of copying, or that Kurosawa's borrowing isn't obvious. The way he frames horsemen against the landscape, that screams Ford so loud it's deafening.

Comedy's comedy. The only crime is not being funny, and who's to say what's funny? I'll admit, our comic portfolio's not as extensive, but we have our practitioners--Bernal, both Ishmael and Joyce, O'Hara in his lighter moods, Joey Reyes when he's not trying too hard, Michiko Yamamoto and Armando Lao with whatever director they happen to work with.

I wouldn't put down our Agent Falcon, or Weng Weng in For Your Height Only (Leavold can tell you that much). Comedy's comedy, and I appreciate it where I find it.