A voice of sanity; more Jeonju pics (last ones, I imagine)

A voice of sanity

And I agree, absolutely--Kiarostami gets harassed, and some sleazy lawyer with incurable TB gets a pass? Whaddahellzgoin on?

Final set of photos from my jury duty at the 8th Jeonju International Film Festival (I think; I'm pretty sure), sent by girl scout extraordinaire Areum Jeong (who should be in New York by now, God willing): 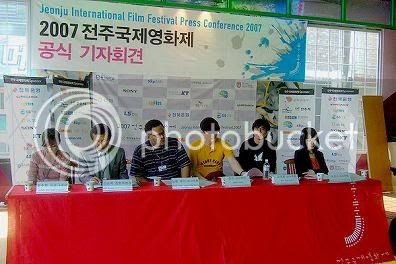 From left to right: film programmer Jung Soo-wan (I liked to call her "Sue Ann," which could be the Tar Heel in me coming out); Mr. Min Byung-lok, festival director; yours truly; Korean actor Jeong Chan; uh--not sure, but I think that's filmmaker Kim Tae-yong; and Netpac jurist and film critic Yu Ji-na (I called her "Gina," no one seemed to notice the difference). 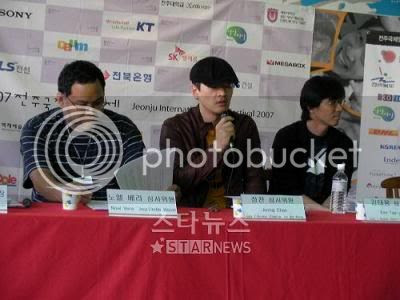 Here's Jeong Chan making a statement in Korean while I--well, I don't remember what I was doing then; trying to follow his speech in English I suppose. Earlier, Jeong had been looking at me while I tried to copy my name in Korean. "Very good," he said. Didn't tell him that compared to Mandarin, Korean seems pretty easy. On the way out, I pocketed that nameplate sitting in front of me, the one with my name in Korean characters.


The press conference that followed was pretty civil, except for one reporter that cited an article critical of the festival; Mr. Min cheerfully replied that attendance in the festival was up, even in rainy days, and that he has it on good word that the one who wrote the article didn't even attend the festival--so he doesn't know what the man's talking about.

Then, being the only foreigner in the conference, the reporters turned on me--asked me what I thought of the festival, what could be improved on, etc., etc. I replied that my impression of the festival was that everyone worked 110% percent, past midnight even--I would catch them still at it when I had come home from either a late screening or a drinking spree, in the wee hours of the morning, and it was a running gag that I kept telling Areum to go to sleep (she had been getting about two hours' rest every night for the past two weeks); she was still pretty and all, I opined, but she looked dead tired.

As for what could be improved--I called on the city of Jeonju to give even more support to the festival. It's a no-brainer, really--the festival gives the city an international profile, brings in visitors both local and foreign, brings films from the world to Jeonju, helps showcase Jeonju films (like the opening film Off Road, which was shot in Jeonju) to the world.

Suck-up sure--what, I was going to bite the hand that hosted me? But I did mean every word. 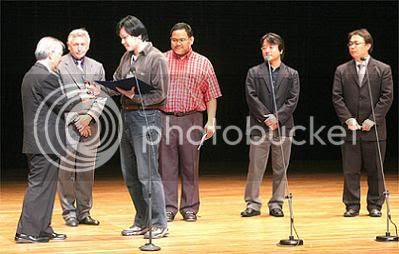 And here's filmmaker Ying Liang, receiving the Woo-suk Award of $10,000 for The Other Half. Behind him from left to right are the three Indie Vision jurists: filmmaker Jiri Menzel, yours truly, filmmaker Lee Yoon-ki. I don't know who the fourth guy is, or who Ying's getting his award from.

Being the one most fluent in English, I got picked to announce the winner at both the press conference and closing ceremonies. Basically repeated the short official speech I wrote (with everyone's input) on the winning film, after which the ceremony ended and we all sat down to watch Johnnie To's Exiled. Jiri didn't watch it; the Czech ambassador had a car waiting to drive him from Jeonju to Seoul, where he spent the night, so we shook hands then and there (and Olga gave me a quick buss). Ah, memories, memories.
at 12:04 AM

Yes, that's filmmaker Kim Tae-yong! He won the award for the Best Film at the Taejong Awards(kinda like Academy Awards in Korea) last week. :)

Haven't seen you in ages man. Wow, didn't imagine you'd be sporting a grey beard by now. Saw Joel a couple of years ago -- it was cool! I enjoy coming over to visit your blog but I must remain anonymous for the moment. Maybe at some point I'll reveal myself... :) Just to say, I'm a blast from the remote past who's sharing the web with you. I also host a blog but for now, it's a secret ;). But I bet you're clever enough to figure out who I am.

Heck, no, I'm not that clever. Let me know when you're ready.