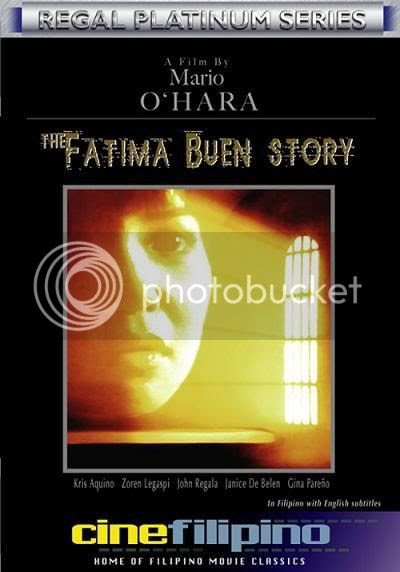 Maybe I need to backtrack, and mention where all the Filipino films I keep writing about can be found. Please note that I will be updating this particular post from time to time, and will provide a permanent link to it on my sidebar.

On recommendations on Filipino films, I posted a list of 13 favorites here:

with the added warning that anyone who began writing about Filipino films from the '80s onwards struggles against the deterioration of film prints, even of films from the '80s (I note that in the article); in fact our earliest available prints come only from 1939. We suffering from an increasingly serious state of amnesia, in effect, with regards to our film heritage.

I rewrote the article, modifying the list some, here:

An article on one of the cinema's best artists, Mike de Leon, here:

The thin line between genius and sanity

As for available copies of the cinema's best-known filmmaker Lino Brocka's best known work Maynila sa Mga Kukong Liwanag (Manila in the Claws of Neon, 1975); I remember seeing VHS copies in New York's video stores, presumably subtitled, and for a time kabayancentral offered copies--which has since vanished. A DVD is being planned, but that's in the future.

Two Brocka films can be found at Facets in Chicago; Orapronobis (Fight for Us, 1989), and Macho Dancer (1988). I wouldn't know if they have subtitles or not.

Recent Filipino films I recommended can be found on VCD or even DVD format here:

The website also offers a few worthwhile films with English subtitles: Mario O'Hara's Babae sa Breakwater (Woman of the Breakwater, the first Filipino feature film to go to Cannes in fifteen years), Tikoy Aguiluz's Biyaheng Langit (Paradise Express); Lino Brocka's Macho Dancer (not his very best, but quite good); Ishmael Bernal's Relasyon (The Affair) and Manila By Night (both among his best; Manila in particular being his masterpiece, in an unfortunately not very good transfer); Jeffrey Jeturian's Tuhog (Larger Than Life--note: I know Jeturian's film has a subtitled DVD; I don't know if the website offers that DVD.

And I should mention a new company, Cinefilipino, dedicated to distributing Unitel films and Filipino classics in the United States, whose DVD releases had been reviewed recently by the New York Times' Dave Kehr. Their titles--all subtitled, though I can't vouch for the quality of the film transfer--include the aforementioned Manila by Night, Macho Dancer and Relayson, Lino Brocka's Ina, Kapatid, Anak (Mother, Sister, Daughter), plus an intriguing one by Mario O'Hara: The Fatima Buen Story, a true life tabloid story given a gothic flavor by one of the finest filmmakers in the industry.

Another alternative is Cinema One in The Filipino Channel (TFC), which a lot of Filipinos seem to subscribe to; they show almost all the films I've mentioned above (untitled, unfortunately); if you have a friend who has a subscription, he could tape it for you, maybe even do "benshi."

Lastly, while I haven't written about these particular pictures (but I mean to, one of these days), here are a few Gerardo de Leon* films available on DVD:

Terror is a Man

Blood of the Vampires

I recommend Terror is a Man and Blood of the Vampires. But if you can't take my word for it, read Mark Holcomb of The Village Voice and his take on Gerardo de Leon.

Meantime Cinefilipino has not been idle; it's managed to release bare-bone but nevertheless handsome DVDs of two of Brocka's best works: Insiang (1976), and Tinmbang Ka Ngunit Kulang (You Were Judged and Found Wanting, 1974). They have also released Lino Brocka's gay-man-adopts-angel-child film Ang Tatay Kong Nanay (My Father the Mother, 1978) and omnibus trio of short films Tatlo, Dalawa, Isa (Three, Two, One, 1974).

Most intriguing in Cinefilipino's catalogue are the Sampaguita Classics, films by Mar Torres and Carlos Vander Tolosa, titles I've heard of but never dreamed could ever be available on DVD. I can speak up for Jack 'n Jill at least--it's a delightful comedy, with Lolita Rodriguez as a butch, jeepney-driving Jill and the great comedian Dolphy as a fragile flower of a Jack (or is it the other way around?).
Of Unitel's original productions, I can recommend Mark Meily's green card comedy La Visa Loca (2005); director Maryo J. delos Reyes and writer Michiko Yamamoto's child drama Magnifico (2003); and Solito and Yamamoto's Ang Pagdadalaga ni Maximo Oliveros (The Blossoming of Maximo Oliveros, 2005).

Mike de Leon's Kakabakaba Ka Ba? (Rough translation--Does Your Heart Beat Faster? 1980) is, of all films, available on DVD! Mike De Leon's one out-and-out comedy isn't the funniest Filipino film ever made, but is easily one of the wittiest, not to mention demented.

And two major Mario O'Hara releases, on VCD! Kastilyong Buhangin (Castle of Sand, 1980) is a commercial vehicle starring acting diva and singer Nora Aunor and stuntman Lito Lapid; accommodating the two lead stars resulted in a film that can only be described as a cross between George Cukor's A Star is Born and Ringo Lam's Prison on Fire.

O'Hara's Bakit Bughaw ang Langit (Why is the Sky Blue? 1981) is O'Hara treading in longtime collaborator Lino Brocka's social realist territory; the results, however, are (I submit) quieter, subtler, more intimate, more intense. Some say this is O'Hara's masterpiece; I don't quite agree, but I think I know where they're coming from.


I write about Kastilyong Buhangin here and Bakit Bughaw ang Langit here. I cannot recommend them highly enough.
at 6:33 AM

Welcome to the Blogspot club. Great to see you here.

I love posts like this one and the one about Filipino films available from Netflix. "Become familiar with Filipino cinema" is pretty high up on my cinematic to-do list thanks to your efforts alone, Noel...

I want to watch all those Gerry de Leon films available on dvd format. Thanks for the info, Noel.

Mind you, these vampire/horror flicks aren't Gerry at their finest, only Gerry at his most inventive and uninhibited. Which is not nothing, but you can't compare Terror is a Man or Blood of the Vampires to El Filibusterismo or The Moises Padilla Story. I'm crazy, I'm not stupid.

My recent conversations with Lav Diaz last Sat, revealed that he wants to remake THE MOISES PADILLA STORY but still, he has qualms and second thoughts about it.

Remake movies always change my perceptions about it. No film comes close always to the original version.

Depends. John Huston's The Maltese Falcon is actually the second remake of the film, and I think The Departed is better than Infernal Affairs (which isn't all that great). I'm sure Lav's take would've been different.

Thanks. Haven't really gotten around to mentioning some of the more recent releases, and the backlog gets bigger all the time...

I hear that Mondo was going to put out films by Celso Ad. Castillo too. Any word on that?

Thanks for the link, Noel. If you haven't seen Silip yet, email me an address and I'll get you a review copy sent. Yes, we have Snake Sisters coming. Sadly, the materials were in pretty bad shape and it took a long time to get them sorted enough for a release. But it's all more or less done now and will be out this year. The parts that look good are stunning and the rest are, well, at least watchable. What an amazing film. Truly unique. We're chasing a couple of other Celso films too. I hope it comes together. He's a special talent.

Peter, sent you an email at mmusa4@boumproductions.com.

gets straight through to me

why weren't any of Jaclyn Jose's earlier films such as Private Show and White Slavery included in the 100 Best Filipino films? Just wondering.

Private Show I might consider, but I think Rono's best is still Eskapo.

White Slavery I really, really did not like. The ending is ludicrous.

I am at an Australian university and the Film Society wants to host a special on Pinoy/Philippine's Cinema...

Sadly we are finding this very difficult! Not many films are distributed here so that immeditaely gives us headaches. We have an educational license and so can purchase from overseas for public screening but... We have no idea! it seems Brillante Mendoza is the only thing we may be able to get!

Any suggestions or help?

I have tried the local Phillipino community and the one store they own that has films. Most are unsubtitled (I think everything there is a bootleg) and much of it is genre filmmaking. We are willing to screen that but so far the films have been poor quality (if subtitled).

Jamie
thanks in advance

I suggest making this appeal to the Cinephiles section of facebook and trying to approach filmmakers there. John Torres, Raya Martin, any number of the Cinemalaya and Cinema One filmmakers (check out the websites for these festivals too). They might be willing to send you digital copies, even subtitled, of their films. You might have to pay for the use, though.

Good luck, and thanks for the enthusiasm.

Just found this blog through a link via Criterion Forum! I wish there were more Philippine Blurays! I know it could be expensive but getting Mr. Lino Brocka's Manila in the Claws of Night and hopefully Insiang in the Criterion Collection ( I know there is a BFI Two film release) can start the ball rolling for Philippine cinema to have more bluray restorations in the US!

Your lips to God's ear