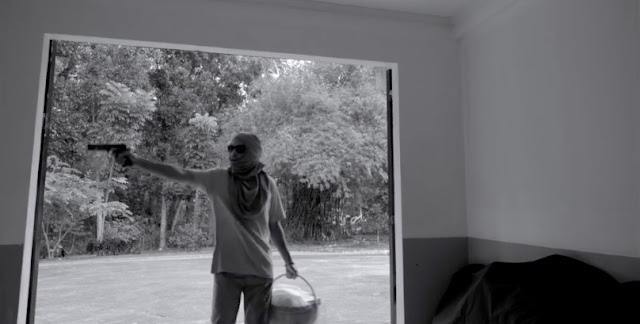 How many ways can Lav Diaz take on the Marcos dictatorship? As early as Batang West Side (West Side Avenue 2001) where a lead character admits to a dark relationship with the regime, the director has presented that period in Philippine history as a kind of collective trauma, a recurring nightmare we are all still struggling to awaken from.

Through Ebolusyon ng Isang Pamilyang Pilipino (Evolution of a Filipino Family 2004), featuring archival footage of the 1986 EDSA revolt that toppled Marcos, into Death in the Land of Encantos (Kagadanan sa Banwaan Ning Mga Enkanto 2007), where a former tormentor and his former tormented replay their parts, into Melancholia (2008), where survivors of military torture undergo radical role-playing therapy, into Norte, The End of History (Norte, Hangganan ng Kasaysayan 2013), where a Raskolnikov figure re-enacts the young Marcos' rise as law student and murderer, into From What is Before (Mula sa Kung Ano ang Noon 2014), which traces the regimes' strategies to justify Martial Law, into Season of the Devil (Panahon ng Halimaw 2018), where Marcos and just-departed president Duterte are mashed into a single monster figure, Marcos has been Diaz's persistent bete noir, the shadow looming large over his onscreen landscapes-- this not including mentions or allusions made in his other films, shorts, documentaries, omnibus entries.

in Isang Salaysay ng Karahasang Pilipino (A Tale of Filipino Violence) Diaz expands Ricky Lee's short story "Servando Magdamag" into a feature. Servando Tres (Bart Guingona) is dying; his son Servando Monzon (John Lloyd Cruz) will soon be taking over the family hacienda. But Junior won't hold it for long-- Captain Andres (Earl Ignacio) of the Armed Forces of the Philippines tells Servando that troops are setting up camp on Monzon grounds and establishing checkpoints along the streets. Later Lieutenant Villaronte (Topper Fabregas) informs Servando that the government will be taking over his properties at an agreed-upon price (the government's), while Servando himself is under investigation for providing aid to the Communist movement-- a charge that will be dropped if he publicly admits to actually being a communist supporter, and if he apologizes for words he spoke out aloud against the president.

These are just some of the stories Diaz collects, not all entirely fiction-- people remember and will verify crucial details. More to the point is the feeling of claustrophobia, of escalating paranoia, particularly among the educated and intellectuals who had to watch their every word and action (maybe the biggest and only laugh Servando manages to enjoy is when he learns he's being prosecuted not because he's a threat but because he hurt the president's feelings).

As for the proletariat-- they don't raise their voice or respond in public, they simply know the score: oppression by the upper class is bad, but oppression well-coordinated and on this scale by a single controlling entity is worse. Better to just shut up, fade into the jungle, join the opposition. Diaz shows us exactly that: a major character without a word of explanation suddenly appears onscreen in NPA (New People's Army) fatigues, squatting in the bush with assault rifle in hand.

Servando Tres in bed wracked with pain is Diaz's devastating portrait of the upper classes. Tres has a history not just of cozying up to established powers-- he's contributed generously to the military-- but of sexually abusing the young women of his hacienda, a sort of side hobby. And he comes from a long line: the original Servando made a deal to flee from Spain to the Philippines after killing his unfaithful lover, where he's granted property that he and his descendants developed and farmed through the centuries, until the bigger predator came along.

Extending the line into the next generation is Servando's brother Hector Maniquiz who was handed quietly over to the member of a religious cult, shut in a cave and abused for twenty-one years, to emerge an impassive killer. Hector's crimes (walling up his father alive, shooting churchgoers) are flashy but small-scale, more crimes of impulse than planned acts of social and political violence. And Hector for all his considerable flaws is refreshingly up-front: he knows what he wants, knows what he's doing and how wrong it is, knows what's in store for him in the near future. As played by Lloyd Cruz in a second role he possesses an irresistible roughneck appeal, and it's Diaz's conceit that yes even a wanton killer is more charming and far less hypocritical than Marcos.

Caught between a violent past and a violent present Servando finds himself in an unenviable position. He feels guilt over the previous Servandos' crimes, guilt over his brother's killing spree, guilt over his own relative powerlessness to do anything about anyone; he feels sneaking sympathy for his wife and brother-in-law's cause and for the workers on his hacienda (one is reminded of Alfredo in Bernardo Bertolucci's 1900-- call this Diaz's microbudget take on the Bertolucci epic). All these forces serve to keep him in a state of suspension, an unstable one: he's compelled to move, but in which direction?

Lloyd Cruz is superb as Servando, suggesting without excessive emoting (the curse of many Filipino actors) the anguish of a man under pressure, much of said pressure involving a government that seems to know everything about him and watches his every move-- but he's hardly alone. Bart Guingona suggests the outsized presence of Servando Tres, despite spending most of his onscreen time on his back; Agot Isidro as Servando's crazed Tiya Dencia suggests an even more forlorn Blanche Dubois than Tennessee Williams'; Hazel Orencio's Belinda serves as both Servando's wife and Dencia's heroically patient caregiver; Nanding Josef plays a quietly thoughtful street philosopher. Diaz even manages to give time to supporting performers-- Ignacio's menacing Captain Andres, Fabregas' sinister Lieutenant Villaronte, a trio of funny blind kibitzers: Loloy (Glendel Dacumos), Trumpo (Jo-Ann Requiestas), Auring (Lhorvie Nuevo).

Diaz continues to grow as a filmmaker: his black and white cinematography is a thing of beauty now, the often complex range of inky shadow and charcoal shade suggesting Japanese sumi-e, the framing constantly thoughtful and precise. Dencia and Belinda rest a moment under a tree's shade, and the image has an unearthly Gustave Dore radiance; Hector walks into a residence hall with a pair of pistols and Diaz cuts the resulting sequence to suggest the unstoppable horror of a man on rampage without catering to the cliches of Hollywood gun violence (slow motion, spurting blood, so forth)-- if anything Diaz's disruptive editing and cool arm's-length camerawork recall Lynne Ramsay's unsettling You Were Never Really Here.

Another film (or novel) that comes to mind watching this is Gerardo de Leon's El Filibusterismo  (The Subversive) where Simoun plots to overthrow the Spanish administration; both de Leon (and Jose Rizal in his source novel) show Simoun's ambivalence: must he create so much evil to obtain an all-important good-- Philippine independence? The answer in the book is a clear "no!" less so in the film adaptation, but both Rizal and de Leon show Simoun's despair at anything ever really changing.

Diaz too-- if you follow this film or better yet follow the course of his films, you can see how his attitude has changed over the years. From the quiet hope for redemption in Kriminal ng Baryo Concepcion (Criminal of Barrio Concepcion) to the retreat into contemplation that concludes Hesus Rebolusyonaryo (Jesus Revolutionary) to the breathlessly staged final image of Panahon ng Halimaw that dares confront us with the question: "What do you want to do about it?" Diaz seems to hold out the possibility of change, perhaps not now but later. Now he-- or his avatar Servando-- seems to look to the past in the form of Servando Tres and Servando the original and their narrative of almost unrelenting cruelty, looks to the future as incarnated by his wild-animal brother Hector, looks to the present as represented by his own near-impotent self, and his shoulders appear to sag in resignation. It's not just Marcos, or the thug-dictators he doesn't know (but is certain) will follow; Servando/Diaz appears to take a step back and see beyond presidents and fascist regimes. His single most hopeful moment-- the birth of his son through Belinda-- is followed by the film's single most painful scene; he seems defeated not by this dictator or that line of dictators, but by life itself-- by God if you like which, watching this film, you wonder if Diaz (sorry-- Servando) believes in anymore.

Meanwhile there's this film, whose existence is as hopeful a sign as any (despite its pessimism) that Philippine cinema is ready and willing to rise to the challenge, take on this budding dictator the way it took on his father and (simultaneously and most powerfully in Diaz's Panahon ng Halimaw) the dictator just departed. Best of the year, perhaps best of several years.