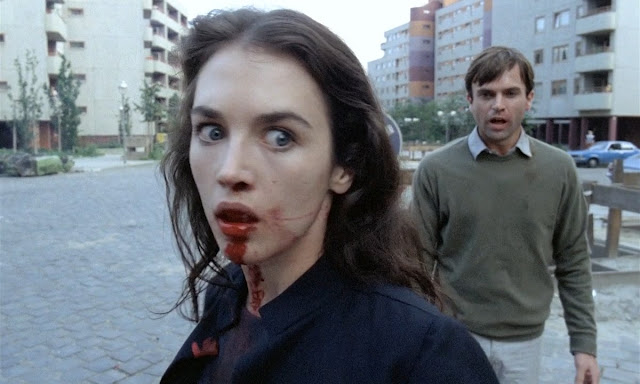 Watching Andrez Zulawski's Possession (1981) again I was struck not so much by the violence and bodily fluids being flung about as I was by the feelings being wielded like so much casual cutlery. When it comes to extreme horror the film has been sadly left behind by more recent arthouse efforts such as Lars Von Trier's Antichrist or (for sheer masochistic suffering) Pascal Laugier's Martyrs-- 'sadly' not because this film should stay top of the heap but because the genre has chosen to go in this rather fruitless direction, to the point of numbness.

Zulawsky reportedly based the film on his experience of divorce from actress Malgorzata Braunek and while we (or I) have no privileged access to what went on between the two I'll hazard a guess that the filmmaker took what happened as a pretext or jumping-off point to go berserk. Folks have called this perhaps the ugliest divorce ever caught onscreen; if they're not right I suspect they're not too far off.

The first half hour builds solid groundwork, the spectacle of a marriage falling apart complete with walkouts, yelling, child neglect (the last incident being particularly distressing-- Zulawsky mentions basing it on what actually happened to his son)-- so far so Bergman, with the actors (Isabelle Adjani as the straying Anna, Sam Neill as distraught husband Mark, Heinz Bennent as Anna's eccentric lover Heinrich) starting out at fever pitch and pushing even further.

"Further" involves Anna desperately hacking a roast to pieces with an electric carver then shoving the pieces into a whining meat grinder (the whine not unlike that of a dentist drill). It involves detectives, surveillance, the grotesque discovery that Anna may be hiding a third lover in an abandoned apartment building, in a desolate corner of the city (Berlin, divided by a Wall the way continent and couple are divided into West and East, Mark and Anna). The emotions are overwrought but still dramatically plausible, the actors building enough momentum to take off so to speak to the next level.

Zulawski at this point seems to take inspiration from the dance musical, where a character experiences an emotion so thoroughly and immensely he has no choice but to express it in song (or dance)-- think Gene Kelly stomping on puddles in Singin in the Rain or Fred Astaire violating the laws of gravity in Royal Wedding. When Anna starts laughing out loud in the subway her body spinning in increasingly wild gyrations (not unlike the tarantella, or a mystic undergoing drug-induced ecstasy) she punctuates her hysteria with odd fluttering wrist movements like a hatchling prematurely attempting flight-- an oddly precise gesture whose beauty (so delicate so unexpected) adds an extra jolt of shock to the horror.

Beyond dance, beyond the duet of man and woman yelling at each other from across a chasm of irreconcilable differences? The film draws on the singular talent of special-effect puppeteer Carlo Rimbaldi (Alien; Close Encounters; E.T. a year later), the resulting scenes so easy to misinterpret most people probably did; wouldn't be surprised to learn of screenings where the audience bursts out in laughter. But Zulawski keeps Rimbaldi's creature in the relative dark, drenches it in sticky slippery blood (the smell on set must have been awful, even if the blood was fake), imbues the imagery with the kind of sensual beauty that makes for great horror-- one imagines would-be anime filmmakers looking at this and perpetuating the hentai genre only a few years later, or Hokusai gazing at this 80's incarnation of his infamous woodwork and nodding his approval.

I mentioned beauty; might as well include humor. Zulawski goes so far so often one wonders if he's openly inviting you to laugh. Certainly Heinrich-- reportedly modeled after Margot's lover-- is meant to be an object of fun: caressing Mark's face or chest, pausing in a Karate Kid crane stance before kicking Mark in the face (Heinrich's a funny and also unsettlingly adept fighter) he's the kind of philosophical poseur one dearly wants to knee in the groin and is the touch of astringent needed to cut through the film's intensity.

At one point Anna talks of Sister Chance and Sister Faith and while her meaning's vague, I can hazard a guess: Chance is the chaos and cruelty in her, Faith is everything else. "Faith can't exclude Chance" she says, suggesting that Faith can't keep the urge to create chaos and cruelty out; she adds "Chance can't explain Faith" she says, suggesting that while Chance may account for much of what happens in the world-- the violence we inflict on ourselves and each other-- Chance can't account for everything either. Somewhere somehow there's room for better; we persist in believing there's something better. Faith suffers a horrifying fate in the subway leaving only Chance, and Anna concludes her rant with the hopeless observation that "Goodness is only some kind of reflection upon evil," the opposite of St. Augustine's assertion; on the basis of what we see and hear here it's hard to argue otherwise.

Then Anna speaks of a third possibility, "like cancer or madness" but adds that cancer or madness only contorts reality; this third possibility pierces it. Does she mean the creature that eventually pierces her? Does she allude (intentionally or not) to the intelligence that folds the narrative like a handkerchief, stitches in the odd doppelganger, tears seemingly pointless holes in the fabric? The rantings of a madwoman presumably, just this side of making sense; the possibility that she might actually make sense if you listen often enough ("What I tell you three times is true") is not a little frightening.

Zulawski talks about his regrets having to work around Rimbaldi's creation (supposed to slowly gestate in a bathtub into something that increasingly resembles human form-- which didn't happen due to budget and time constraints) and having to cut out an extra character, an older man who rescued and nurtured Anna, both excised details presumably helping clarify the plot-- but part of the film's power is how near-incomprehensible and incomplete it feels, as if important information is being withheld, how we must look to nuances in Anna's relationship with Mark for clues (Mark arrives after Anna informs him she wants a divorce and very next scene they're in bed; both shout abuse and even strike each other but they're at their most emotionally expressive-- most intimate even-- with each other). We flounder and fail to understand, but Zulawski's real achievement is in making us care enough for the characters to want to understand-- to stay with his tale no matter what loops and digressions he throws our way.

On Anna and Mark's doppelgangers-- Anna in the form of Mark's teacher Helen (which makes eccentric sense: what other adult beside the parent is more important or more present in a child's life than his teacher?), Mark in the form of a second Mark, the ultimate manifestation of Anna's infidelity: the pair seem to shed guilt and human suffering like arthropods outgrowing their chitlin shells, poised to sprout new wings or new abilities as they emerge, blankly clean. Helen might be the Sister Faith that Anna speaks of and yes she's the diametrical opposite of Anna; she also feels less vivid, a tad lifeless, like something that has successfully excluded part of itself (Chance?) and ends up the lesser for it.

The ending is darkly hinted at, through sirens and jet engines and artillery fire; through Helen gazing wide-eyed at the camera and new Mark writhing behind clouded glass, seeking a way to break in-- break through to yet another higher level.

But that's the film looking forward: the vision wouldn't have much impact if it didn't leave us with a sharp sense of what's being left behind. For all the makeup effects and Rimbaldi's clumsy (yet eerie-erotic) prosthetics, the film's most indelible moments remain those where man and woman experience mere human pain, inflicted by something beyond either of them. It's Mark listening to Anna, so beautiful so sad, telling of a torment so intense it literally twists her into knots; it's any man hearing any woman (or vice versa) he cares about speak words he can't apprehend, describing events he can't accept; it's any of us witnessing a country close to our hearts (the United States, Ukraine, the Philippines) sliding into madness, for reasons we cannot fathom. The pain-- a constriction in your chest, difficult but not physically unbearable-- may in fact be the worst pain in the world because it afflicts your entire being. You watch your beloved in utter helplessness, and despair of her ever becoming whole again. 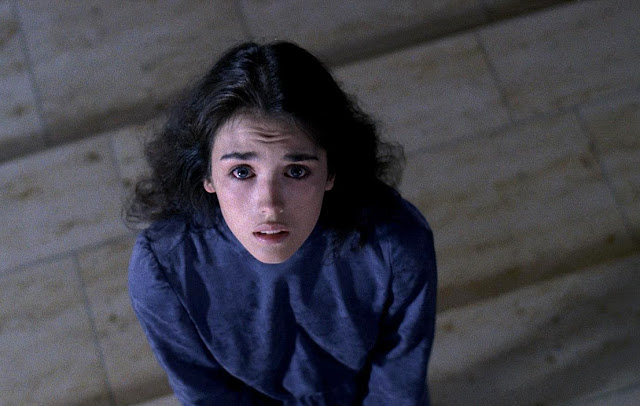