Dr. Strange in the Multiverse of Madness (Sam Raimi, 2022) 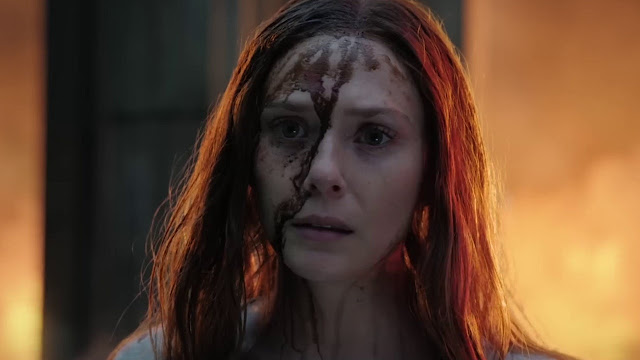 A new Benedict Cumberbatch! (he was better in The Power of the Dog)

A new Marvel superproduction! (as if that was a recommendation)

And so it came to pass that I found myself sitting down to my first Marvel movie in years-- okay, since last year's The Eternals (actually liked that one). This picture starts off running, literally, with Dr. Stephen Strange (Cumberbatch) sprinting across the gap between universes with one America Chavez (Xochiti Gomez) till they reach the Book of Vishanti-- only they don't; a multitentacled demon in hot pursuit fatally skewers Strange, is about to do the same to Chavez when a starshaped hole in reality pops open and Chavez and corpse are sucked into the city of Manhattan, where Dr. Stephen Strange attends the wedding of former girlfriend Christine Palmer (Rachel McAdam) and round a corner a giant one-eyed octopus goes on rampage--

And so on and so forth. I'm blanking out on details-- Book of Vishanti? Darkhold? Westview? I don't have Disney+ and haven't bothered to see Wandavision or Spiderman: No Way Home so maybe half the narrative's zoomed past my head; the movie's a beat too fast to follow (why is Manhattan full of flowers?) so I'm leaning back hoping to just enjoy the ride.

Might as well note while sitting in the dark that the movie has an old-fashioned regard for books: one is the source of dark power the other a symbol of hope; pages are flipped or singed, whole volumes burnt to crisp. Nothing wrong in my book with the assertion that the printed word is an important source of knowledge and inspiration and should be respected as such; fully expect to crack open Joyce's Finnegans Wake one of these days, speak the word "bababadalgharaghtakamminarronnkonnbronntonnerronntuonnthunntrovarrhounawnskawntoohoohoordenenthurnuk!" and find myself running for my life inside some Irish pubkeeper's dream (between Vishanti and Joyce I'd say Joyce is the more phantasmagorical).

Meanwhile grooving to this movie is more fun than one might expect, and I blame Raimi: he hasn't made a picture in nine years and you miss his gonzo often low-tech sensibility-- the way his camera suddenly zooms in for emphasis, say, or the way eyeballs pop out of sockets, or the way twisted half-decomposed bodies refuse to stay dead and buried. Folks get me wrong about superhero movies--my problem isn't that they're too comically lightweight or too darkly grim; my real problem is that there's nothing to look at. Hiring malleable directors to manage traffic flow in your franchise may help churn out stable predictable product but if you want to capture lightning in a bottle first you have to have lightning.

Maybe not. Elizabeth Olsen as Wanda a.k.a. The Scarlet Witch provides the electric charge that jolts this patchwork mess to life. Her quest to seek her lost children is a struggle any parent or anyone who's lost a loved one can understand. That furtive idea lurking at the back of one's grieving mind: "If I can bring them back"-- the results may not go well, but we're not being honest if we say we never entertained such thoughts.

And Raimi plays it up; wraps Olsen in shadows as she strides forth with red LED eyes, splatters her face with drying blood (Brian de Palma's Carrie much?). Far as gore goes this is Parental Guidance Raimi, barely worth mentioning, but one look at Olsen's wild despairing face and you know where the true horror lies: this is love without hope seeking a way to keep itself alive, knowing what it's doing is wrong wrong wrong, lying to itself constantly that somehow somewhere it'll find a way. I saw the movie with friends, and one of them remarked: "I kept rooting for the evil witch." I can relate to that and suspect Raimi does too-- at one point we see Wanda's imagined children watching TV and on the small screen was Snow White and the Seven Dwarves. I remember Woody Allen in Annie Hall saying: "I immediately fell for the Wicked Queen."

Multiverse of Madness is pretty good, perhaps the best Marvel since Raimi's three Spider-Man entries and really it's hard to fault the picture for anything save for flaws that don't really matter (rigorous plotting; realism; characterization of every one not Olsen). O and timing-- over a month ago A24 released Everything Everywhere All at Once and what Dr. Strange achieved for $200 million the Daniels did for only $25 million; the universes are wilder (Paint Universe and Dispersing-Cubes Universe vs. Hotdog Fingers Universe and Just Rocks Universe), the McGuffin even more bizarre (Book of Vishanti, meet The Everything Bagel). Perversely, the fight sequences in Everything are more realistic because 1) they don't have the money to do a lot of CGI, and 2) it's performed mostly by Ke Huy Quan and Michelle Yeoh-- talk about low-tech, they do the action for real. Yes Olsen was affecting but Michelle Yeoh I submit has the richer role, playing Loser Evelyn, Movie-Star Evelyn, Sausage Fingers Evelyn, so on. And none of this is arbitrary; turns out almost every Evelyn is the result of a choice her character makes or fails to make (the rest created by people who have affected Evelyn), suggesting the branching, bewildering complexity of every life, even a life that's relatively low-profile. In effect The Daniels now are what Raimi used to be when he first started, inventive and imaginative with little to nonexistent production budget-- but this is where I first came in; pardon me while I let myself out the side door. 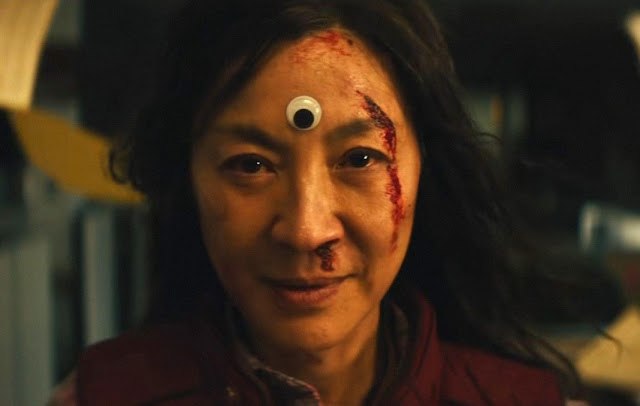