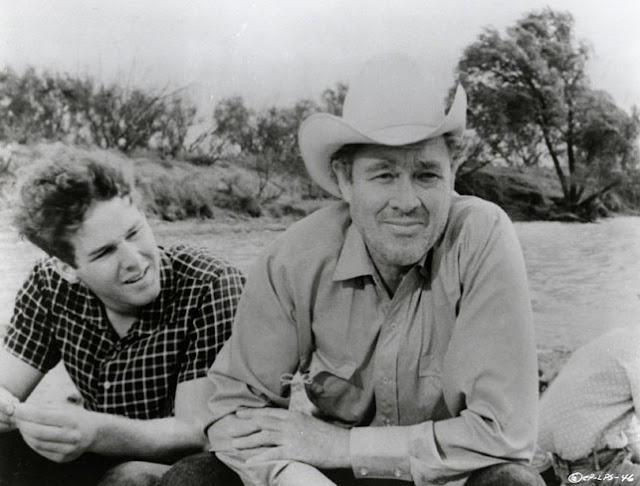 If you're going to film someone's story-- in this case Larry McMurtry's semi-autobiographical novel-- you can do worse than follow Orson Welles' suggestion to shoot in black and white. Faded photos have an allure no JPEG file will ever have; black and white celluloid will have this much over digital color no matter how high the definition-- they're already texture of memories, snipped out and pasted in someone's yellowing album.

Peter Bogdanovich's adaptation of McMurtry's The Last Picture Show opens with what looks like a shuttered movie theater: dust whirling down empty street, town somnolent save for the wind's low whistle. Part of the filmmaker's achievement is in translating the novel's tidal pull to the big screen: everything and everyone looks worn yet fascinating as they live their hardscrabble lives. You feel as if you know them, as if they reflect some sadder not much wiser aspect of you-- that McMurtry by writing his fictionalized memoirs is writing the collective memory of callow young men, unworthy yet not unresponsive witnesses to the suffering of others.

The film must have had something folks responded to, otherwise it wouldn't have made such an impression; something Lino Brocka must have responded to, otherwise he wouldn't have made his own semi-autobiographical Tinimbang Ka Ngunit Kulang (You Were Judged But Found Wanting, 1974). Watching the earlier film one is struck by how closely Brocka (who wrote the outline on which collaborator Mario O'Hara based his screenplay) follows the template: young Junior (Christopher de Leon) is entranced with Evangeline (Hilda Koronel) the way Sonny/Duane (Timothy Bottoms, Jeff Bridges) is with Jacy (Cybill Shepherd); Junior finds a father figure in the outcast Berto (O'Hara again) a mother figure in the homeless Kuala (Lolita Rodriguez), the way Sonny sees a father in Sam the Lion (Ben Johnson) a mother/lover in Ruth Popper (Cloris Leachman). Tinimbang ends with Junior staring down the townfolk, judging them for their hypocrisy; Sonny glares at the old men gathered round the prone Billy (Timothy's younger brother Sam), silently condemning them for their callousness.

A difference between the films: The Last Picture Show with its characters and narrative taken from McMurtry's novel forms a tapestry so cunningly wrought that if you undo a stitch everything falls apart. Sonny starts off as unthinking as the other teens but his sharp sense of shame pries him open like an oyster; best friend Duane may seem invincibly dense but his travels-- and his spell in the military-- force him to develop an intriguing wariness. One consciousness develops onscreen, the other offscreen; both wander different paths to end up in a similar state. Even self-centered Jacy eventually earns our sympathy, when we realize that her beauty and social status don't exempt her from her share of unhappiness.

Brocka's characters aren't as nuanced. Junior teases Kuala, then is quickly reformed; Evangeline is a prettily dolled-up plot function designed to goad Junior; the adults are mostly hectoring dullards save for Milagros (Laurice Guillen), who initiates Junior into the mysteries of sex, then drops out of sight. Junior's father Cesar has some spark of awareness-- a nagging regret at what-could-have-been with the once-beautiful Kuala-- which is doused halfway through. This is Brocka's story, in effect, and he's not about to dull its righteous edge with moral ambiguity.

What Brocka lacks in emotional sophistication he makes up in intensity. We see McMurtry and Bogdanovich's small town through a lens mournfully, the sadness offset by touches of satire; we see Brocka's through the eyes of a departing young man--a political figure's illegitimate child--who returns years later a celebrated filmmaker with an axe to grind. Bogdanovich's camera taking on McMurtry's POV gazes back from the cool distance of decades; Brocka's simmers as if it happened to him yesterday.

Sam the Lion may be the town's most self-aware character but he's also the owner of a movie theater, a pool hall, a cafe; Berto is not just dirt poor he's a leper--he knows what he is because people won't let him for a moment forget. As O'Hara plays him Berto is introduced with the threatening demeanor of a sexual predator; he's perhaps the one character Brocka and O'Hara manage to improve on (is it a coincidence he's also the role O'Hara happens to play?). Berto's passing is turned into a spectacular sendoff, the film's melodramatic finale; Sam's occurs offscreen, mentioned in an aside by a townsfolk, the rest of the film's running time spent ruminating over the implications.

The difference between Sam and Berto suggests one difference between Bogdanovich's and Brocka's masterworks. Sam is a symbol of what his town once was, of nobility fallen to magnificent ruin; Berto symbolizes nothing of his town-- if anything they explicitly reject him-- save what it could be. What it might aspire to if it had the acuity to realize what it is. Call Berto the town's scapegoat, and drive him to the outskirts to be stoned, for sanity's sake.

Each film's impact reflects something of their nature. Where most respond to "What's the best picture of the 70s?" with standard-issue replies (Taxi Driver; The Godfather; Apocalypse Now; Cabaret), some smartass might chirp "The Last Picture Show" and earn a wave of respectful nods, then move on to more familiar titles--though a thoughtful few will smile in lingering affection. Tinimbang burst like a signal flare on the Filipino filmmaking scene, announcing Brocka as a major director and the '70s as a golden age of Philippine Cinema. One could not have happened without the other. 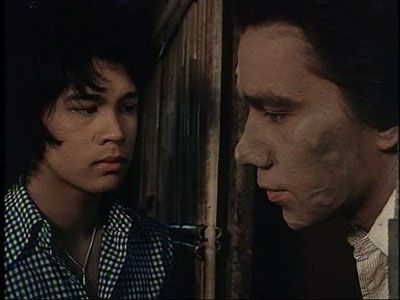