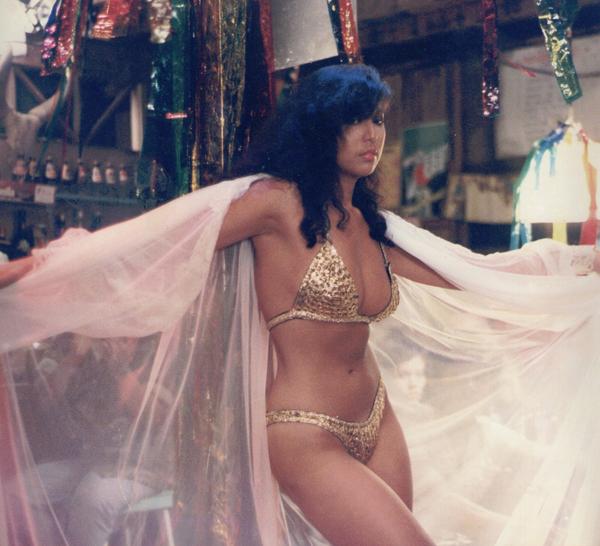 The house on the hill

Call Celso Ad. Castillo's Paradise Inn his inversion (perversion if you like) of Lino Brocka's classic Insiang--mother and daughter locked in life-or-death rivalry, only instead of a Manila slum they live in the eponymously named establishment, a nightclub / dive bar / strip joint perched on top of a hill.

Where Insiang and her mother are lost among the teeming thousands jostling for space in urban Manila, Ester Paraiso (Lolita Rodriguez) and her daughter Daria (Vivan Velez) stand exposed on all sides; where Brocka plays up the claustrophobia in Tondo's teeming slums, Castillo (filming amongst the hills of Batangas) emphasizes the sense of helplessness, of agoraphobia.

Never one to shy away from symbolism Castillo thoroughly milks the stripper metaphor. The two women are constant objects of voyeurism, are closely observed literally and figuratively: they are envied for their money (the modest but consistent income they earn from property and business), their influence (Ester's lover is Vice Mayor Anton (Robert Arevalo) who prefers sleeping at Ester's over his own home--the link between prostitution and politics made hilariously literal), Daria's youth and beauty. Some would like to pull them off their high hilltop; others offer money or favors in exchange for a kiss a dance a night's romance...


The film is a sordid melodrama that Castillo somehow transforms through the force of his camerawork. With the help of veteran cinematographer and frequent collaborator Romy Vitug, Castillo gives us the agoraphobia right between our eyes, even in the interior shots: the inn is an entirely constructed object (by film's end we find out why) with wide windows in every wall, both first and second floor; the second floor has an outer balcony running the length of the building.

The film's theme and building's design becomes apparent early in the film, when Daria is pursued by her boyfriend Al (Dennis Roldan) upstairs. He keeps clutching at her, trying to kiss her; she keeps pulling away. In between clinches the camera captures glimpses of the landscape, all undulating grasslands and brilliant pale skies (before dawn the hill is in shadow, the sky a purple bruise), and we're struck by an incongruity: why with such breathtaking outdoors do these people spend so much time indoors? If there's ever such a thing as 'paradise' it surrounds them, just there for the taking.

But no; the people fix their eyes inwards, pursuing money power sex love like ants swarming over a piece of meat, ignoring the indescribable bounty outside; eventually you realize that there's an electric tension between them and the space beyond, almost a need to avoid all that beauty.* Does the tension exist because, as Melville writes "...by its indefiniteness it shadows forth the heartless voids and immensities of the universe, and thus stabs us from behind with the thought of annihilation...?" Or does it exist because (as Melville adds) nature 'paints like the harlot,' covering up a terrifying blank oblivion underneath, and these people are acutely aware of that oblivion--more so atop their wind-whipped rock?

*(Only occasionally do these folks turn their gaze outwards, standing on the balcony looking down; the moments register less as exceptions to Castillo's visual rule than as periods of blessed relief--as if the putridity and perversion inside has become too much, and they are forced to take a break. That, or a vehicle--signaling either threatened assault or impending doom--is roaring up the driveway),

Lolita Rodriguez has enjoyed a career of indelible roles, from showbiz mother Toyang in Stardoom to impulsive Renata in Ina Ka ng Anak Mo to homeless Kuala in Tinimbang Ka Ngunit Kulang; this was her second-to-the-last before retiring, and the only one with Castillo. Her vulnerable yet strong-willed Ester stands alongside her other great characters, head held high in their company; her early scene with Joaquin, sketching the history and nature of their relationship, is about as superb and painful a summary of a dysfunctional marriage as anything I've seen on film, including Kane and Emily's in Orson Welles' debut feature.

Vivian Velez, chosen presumably for her madonnalike beauty and superb figure, also happens to be a superb actress: her line delivery precise and varied, her big melodramatic moments deftly underplayed.

The story involves several subplots, the most memorable involving Sonia (Armida Siguion-Reyna), Vice Mayor Anton's wife: drawing on the full force of her kontrabida persona, Siguion-Reyna stands proudly on the side of puritanical righteousness, then with the speed of a cobra strike turns what should have been a moment of tragic personal loss into golden political opportunity. Ester and Daria can only listen in amazement: whores often lead lurid lives but their sins pale in comparison to that of politicians (who for starters could add large-scale hypocrisy to their long long list of moral offenses).

But subplots no matter how well-executed and supporting actors no matter how talented (the film has a fistful, from Michael de Mesa's sexy soulful prestidigitator to Jinggoy Estrada channeling his father's great performance in The Moises Padilla Story), all fall away to reveal the film's basic conflict between mother and daughter. The finale--which feels like a slowed-down more lyrical Red Desert, or a slightly prescient The Sacrifice (could Tarkovsky have seen this film? Could he perhaps have borrowed from it?)--is a melodramatic outrage by the conventional standards of Syd Mead-style three-act scriptwriting; I call it a grand operatic moment, Castillo's expression of contempt for narrative structure, the climactic shedding of the film's final veil. There is after all is said and done nothing from the outside world that can truly threaten the two; even the sound of arriving vehicles fade, leaving only the two women calling out to each other on their lonely mount. Men are drawn by the daughter's drop-dead beauty, repelled by the mother's smoldering resentment; considering the nature of their relationship, how else can Castillo end his film other than with some unforgettable larger-than-life gesture of finality? 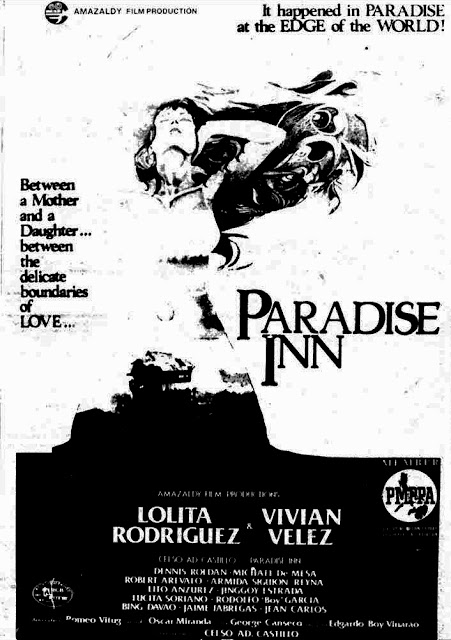 I haven't seen this, unfortunately. I was struck by your comment, Vivian Velez is a "superb actress". I only know her by reputation, in other words, she's an actress because of her looks. If you judge her superb, I have no reason to doubt you. But is she superb because of natural talent or because of Celso ad. Castillo's skills as a director? Again, being totally unfamiliar with her work, I don't know if she did a string of great movies.

Celso has skill but I also think she's got talent--she gave an excellent performance in Ralston Joven's Bendor, and in Erik Matti's On the Job. She's grown into a capable character actress.

Vivian Velez subtle yet powerful performance is in contrast with the tour de force acting by Lolita Rodriguez. Theirs is a match made in Castillo heaven. Paradise Inn is a classic.

The contrast between Lolita's grand performance and Velez's underplaying works I think. The mother performs, the daughter reacts--that's often how it goes in families.

Restored classic, now showing on cinema 1.. old actors are in, like Mary Walter.. curiosity to this new generation but a bit complicated story, very beautiful Vivian Velez brings out the art in this film.

She was gorgeous. Still handsome today.