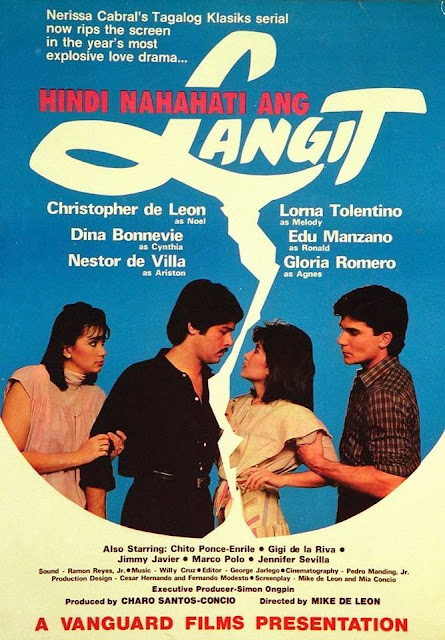 Part of the 10th Cinema One Originals Festival:

Easy to say Hindi Nahahati ang Langit (rough translation, The Heavens Indivisible, 1985) is an anomaly in Mike De Leon's filmography. Compared to his other works it's relatively lighthearted in tone; it's from a less-than-prestigious source (a komiks novel written by Nerissa Cabral, serialized in Tagalog Klasiks); and--wonders of wonders--it made money at the boxoffice.

But think about it: komiks is actually a popular fount for film ideas--Ishmael Bernal did at least two I can recall (Zoom, Zoom Superman! and Tisoy); Lino Brocka started his career with an adaptation (Wanted: Perfect Mother), followed by a slew of other titles (Tubog sa Ginto (Dipped in Gold), Cadena de Amor (Chain of Love), all three written by the inimitable Mars Ravelo); one of Gerardo de Leon's most famous films was about a mermaid (Dyesebel, also by Ravelo). Far from being an unusual choice you might say De Leon (Mike, not Gerardo) was following in a tried-and-true tradition.

The opening sequence establishes the tone: a trio of crystal swans (shades of The Glass Menagerie) floodlit with icicle blue and warmblooded crimson; delirious music as the camera glides round the flock, catching every flash and glitter.  The swans presented as priceless artifacts, fabulous treasures, mythical creatures--actually just fine crystal, but to us and the film's characters they're potent symbols of innocence, magic.

What follows is pure melodrama: Noel (Christopher De Leon) and Melody (Lorna Tolentino) are step-siblings (their parents Ariston (Nestor de Villa) and Agnes (Gloria Romero) brought kids from previous spouses into their marriage). Noel and Melody struggle against each other, struggle to live their own lives--Noel marries Cynthia (Dina Bonnevie), Melody marries Ronald (Edu Manzano)--but eventually find that what they're really struggling against is their attraction to each other. 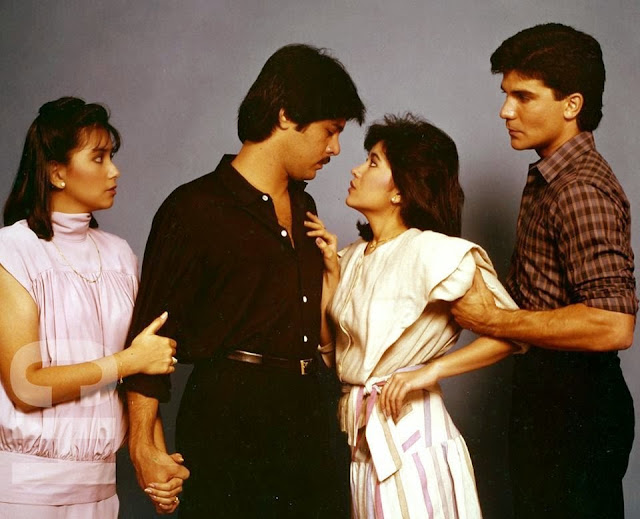 It's your standard-issue love story, made spicier by the suggestion if not actual substance of incest. I'm guessing De Leon was more intrigued by this than if they really were an incestuous couple--the tension between the two that feels wrong but really isn't (think of the mother-son/son-sister relationships in Herman Melville's bizarre Pierre) can be laughable if overemphasized, dissipate if underemphasized. What I suspect intrigues De Leon is the challenge of maintaining that tension.

De Leon's attack is not unsimilar to that of Douglas Sirk: his style mostly serves the story (crisp editing that emphasizes the dialogue's brisk pace), sometimes slyly subverts it (romantic moments play out in medium or long shot; the footage of crystal swans that begin and end the film both evokes and parodies the glamor of perfume commercials, only with more chromatic intensity and visual flair; in a threatened rape scene and to the tune of sexy sax music the victim is laid out like a corpse on a slab, the rapist awkward, hesitant). At some level De Leon (like Sirk) does respect the material, or at least its potential to move the audience--he holds you at arm's length from the emotions onscreen so only the most intense feelings manage to reach you, ultimately move you, for being so perceptible at such a distance.

Lorna Tolentino is arguably the most underrated of Filipino dramatic actresses. Often dismissed as too beautiful to take seriously in a drama, I'd say she's too subtle to give away the fact that she's acting in a drama--here she ages from college student to young adult and her body language and gestures sell the change more persuasively than any costume change or makeup application. Her Melody is the first of the two siblings to grow up; faced with the death of her mother and care of her slowly failing stepfather, she steps into her adult shoes with an effortlessness that's actually quite a pleasure to see (if you happen to be watching--she's too canny to actually call your attention). I say 'dramatic' because she's known for her drama roles, but her handling of this film's complex and often witty dialogue betrays a comic flair; she's just (again) too understated to go for the quick cheap laugh, keeping the honesty, the integrity of her character intact.

Christopher De Leon is the default male actor for dramatic lead roles, and has often been criticized for overacting; here De Leon (Mike, not Christopher) keeps him firmly on leash, has him play Noel as an entitled Prince Hal turned somber Henry V--soon as his dad dies he takes over the family construction business, and the father's bowed, burdened posture; when he looks at Melody his annoyance acquires a paternal squint--he literally feels he has to ensure the girl's virginity ("For whom?" is pointedly not asked). Understated doesn't come naturally to De Leon (Christopher, not Mike) but I can't think of a finer more moving moment than when he hears of his father's death on the phone, turns slowly to face Cynthia--who's staring at him, curious--and stumbles towards her, loaded with a weight too terrible to bear.

Dina Bonnevie as Cynthia is not as well-served as the rest of the cast; she's conceived as Noel's matrimonial ball-and-chain, and can barely shake off the weight of all the cliches pulling her down. That said, she does have a scene late in the film, on a hospital bed, where she gives Noel her calm, confident assessment of where they are in their lives, and where she has to be in her life, and how she can best achieve that position--the very definition of a strong, independent woman, or at least one who at long last has realized her strength and independence, despite the men in her life.

Edu Manzano's Roland is possibly my favorite character--he's introduced as a witty charmer, an Oscar Wildean bon vivant ever ready with a joke or playful schtick; when his character decides to take a step that puts him irretrievably beyond our sympathies it comes almost as a shock--we like him too much to want to lose him (the term 'date rape' only started being used in the early '80s; on that one detail you might say this film was cutting-edge, almost prescient).

Only we don't lose Roland, at least not completely. He reveals himself to be the film's real villain, and hatches one plan or another to thwart the growing attraction between Noel and Melody, and still De Leon (the director) somehow manages to keep him fascinating, if not fully sympathetic. He's the product of a rich and powerful family, and we learn at his most potent in bed; outside of bed he's dependent on his family's wealth and position. His character might be likened to Hindley Earnshaw (in fact characters and portions of the plot recall Wuthering Heights)--an alcoholic weakling who lashes out, with diminishing effectiveness, in his hatred and growing despair.

De Leon serves the film best he can, inserts flourishes that enliven the narrative (the aforementioned crystal swan sequences; a car crash where the very screen flares up and crumples, the moment probably inspired by the final image in Monte Hellman's Two-Lane Blacktop (De Leon trumps Hellman by making his meltdown more narratively appropriate, as if the camera was burning from the car crash flames)).

What makes it a true De Leon film however is the subtext, the themes of familial dysfunction and manipulation. As with Dr. Torres, as with Alpha Kappa Omega's masters, as with Sgt. Diosdado Carandang, we have the patriarchal figure trying to dominate his weaker siblings/children/cadets. Noel is the classic De Leon antagonist who wields his power precisely, ruthlessly; Melody (as with Rosa, Adelina, Sid Lucero) fights back best she can, but it's mostly a losing battle. Her one true escape from Noel involved Roland--as it turns out an exchange of one form of captivity for another.

Melody with Roland's help enters the construction business in competition with Noel; at one point the two siblings quarrel over the details of a co-partnered project, and Noel handily bests her with facts, figures, logic (a typical tactic for a De Leon character).*


* Note that the dialogue involving the construction industry sounds thoroughly researched and accurate--a far cry from the business dialogue in almost any Filipino film I can think of that doesn't involve the film industry itself, or media advertising.

Melody's capitulation seems total; she looks almost ready to fall into Noel's arms. Seems perverse to note that this moment shivers with more sexual tension than any other scene involving Melody with Roland, or Noel with Cynthia. Yes it's probably in the script (adapted by Mia Concio) but there's a special frisson thanks to De Leon, a master at depicting unspoken thoughts and stifled emotions; it's almost as if Noel and Melody were conducting two dialogues at once, verbal and non-verbal, the more interesting being the one not spoken.

In this and in all matters sexual De Leon apparently shares an attitude not with master filmmaker Stanley Kubrick (with whom he is always being compared) but Alfred Hitchcock: as with Hitchcock sex for De Leon is verboten, to be mentioned in whispers, regarded with fear and suspicion--to be repressed as much and as often as possible. Even when in a late scene Noel and Melody openly discuss their feelings they're standing outside, in the dark, mostly facing away from each other, their gestures and expression as if they were discussing yet another construction project (as if they were afraid someone might be watching). There is passion there yes, but it's the kind of passion that's constantly being sequelched out of fear of exposure (again, the incest taboo), the heat intensified by suppression.

Mentioned De Leon's affinity for all things  Kubrick--his Batch '81 owes many of its anarchic impulses to A Clockwork Orange, his Kisapmata is considered a compacted transposition of The Shining. The admiration is clear, but I'd cite several qualities that would lead me to not just distinguish from but prefer De Leon over Kubrick: 1) De Leon achieved many of his films on a budget about a fraction of the catering cost on many of Kubrick's epics; 2) De Leon explored personal demons and through those demons darker aspects of the Filipino psyche with an intimacy you don't really find in Kubrick's films (where Kubrick peers with magnifying glasses from a great height, De Leon seems to be probing in your mouth for a nerve to pick at; and 3) Kubrick bent and stretched the rules constituting popular filmmaking but never to the extent that he made an outright financial failure (De Leon pretty much doesn't give a shit). If De Leon (Mike, Filipino, filmmaker) reportedly likes Hindi Nahahati ang Langit despite pulling his name from its credits (said name reinserted for this restoration) I suspect it isn't just because it's the one hit of his career (his biggest moneymaker in fact); it's because it so unmistakably betrays the taint of his dark sensibility. 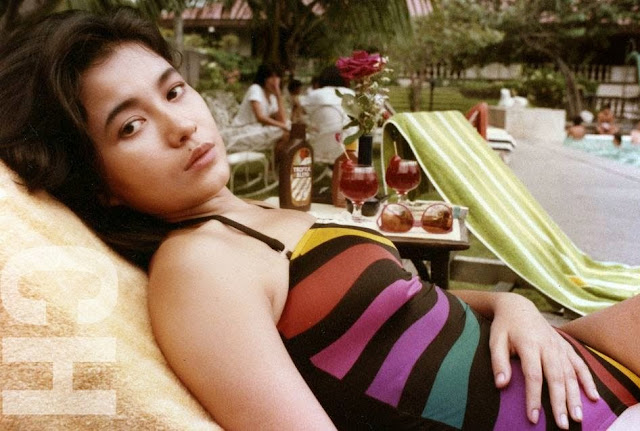