The Tale of Princess Kaguya (Kaguya-hime no Monogatari, Isao Takahata, 2013) 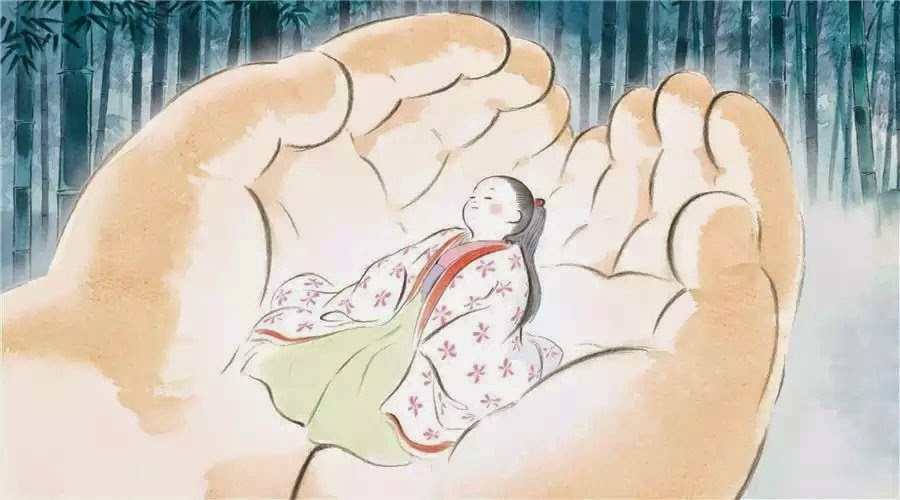 Call him Hayao Miyazaki's dark elder. Where Miyazaki has earned a small but enduring popularity--not to mention a gold-plated doorstop--in the West, longtime collaborator Isao Takahata was content to toil in relative obscurity (if anything Takahata has earned the respect of a handful of Western critics despite his apparent lack of interest in drawing their attention). You see a trace of the latter's sensibility in the former's work: an awareness of larger forces--social, political, historical--swirling around the protagonists; a sense of responsibility towards more than just one's own survival. Where Takahata differs most from Miyazaki I'd say is in his pitiless regard--his tendency to bring a story to its conclusion no matter how cruel or unhappy the conclusion may be.


Takahata is also the more overtly political filmmaker; where Miyazaki's first directorial effort was an oversized heist caper (Castle of Cagliostro), Takahata's was an epic fantasy (Little Norse Prince, 1968) that celebrated the power of collective action. His best known work Grave of the Fireflies (1988) depicted a government too obsessed with winning (or honorably losing) a war to properly care for its people, and the harrowing fate of said people when they cut their ties with the general community. Only Yesterday (1991) describes the emotional pull an idyllic farming family exerts on a young woman; Pom Poko (1994)--ostensibly a fantasy about magical animals warring on intruding humans--reveals itself to be the record (pitilessly told, as always) of a genocide, the passing of an entire people.

After the 1999 domestic comedy My Neighbor the Yamadas--easily the happiest (though no less complex or rewarding) film Takahata has directed--silence for fourteen years. Then this: The Tale of Princess Kaguya (Kaguya-hime no Monogatari, 2013). Takahata being 78, Kaguya may be his last film, and it feels like a last film--a summing up and restating in as impassioned a manner all his themes and animation styles to date. Kaguya evokes the dreamy heroine of Only Yesterday; the uneasy relationship between villagers and supernatural stranger in Little Norse Prince; the sense of overwhelming tragedy in Pom Poko and Grave of the Fireflies. From a restrained use of digital animation (mostly hastily sketched objects sliding past each other in a startling (if subtle) display of depth) to images inspired by the fine detailing and muted color palettes of the ukiyo-e style of woodblock printing, to at one point a breathtaking realization of the sumi-e style of inkwash art, Takahata draws not only from his own work but from much of Japan's visual history.

A clue to the film's style is the seeming carelessness of the graphic line, the way Takahata has his animators sketch out the main figures leaving the background edges unfinished. One can call it a too-precious mannerism that smacks of overconfidence--as if he's saying his film's so good he doesn't have to be so thorough--or one can say he's focused with laser precision on what really matters: the telling of a spare, long-ago tale in a way that engages our modern sensibilities.

The film is based on one of Japan's oldest stories. In the original version the baby found in a cut-open bamboo grows up without much fuss; the bamboo cutter grows wealthy from the gold nuggets found in succeeding poles of cut bamboo and introduces the girl to society, attempting to marry her off to five eligible bachelors.  She makes impossible demands of her suitors (suggesting that the girl has an unyielding nature) and they either fail miserably or die trying.

Takahata takes this simple story and with it does something remarkably simple: creates a vulnerable, recognizably human young girl, to be inserted into the narrative's center.

Doesn't sound like much of an achievement--the first half hour is mostly idyllic, with Kaguya learning to walk and talk at an accelerated pace; later she comes to know the village folk, particularly a rough-mannered big-hearted boy named Sutemaru. When her father, Sanuki no Miyatsuko, finds the fine clothes and gold nuggets, he decides that she must rise up in the world--hence the move to the city and introduction to her five suitors.

Sanuki is the crucial character in the film; with gold as catalyst, he starts thinking beyond his station in life, from lowly proletariat to aspiring bourgeoisie. To Sanuki's credit the climb is intended to benefit not him but his beloved daughter; the pain he inflicts is as selfless and unintentional as it is real. This girl, this real girl (as opposed to the sketched figure in the tale) wants nothing to do with fine clothes, gold nuggets, or marriage;* but she loves her father, and she must obey.

*(Well, she might want to try on the clothes--just to see how they'd look on her)

The five suitors' courtship of Kaguya plays out like a comedy; Takahata mercilessly skewers the noble classes--their hypocrisies, their pretentiousness, their insatiable avarice. His Kaguya's response to their attentions isn't all hilarity though: she hands out impossible demands not because she's exacting but because she wants to be left alone, to put herself beyond their reach. When they come to harm, she feels responsible; our own laughter dies and we recognize the suitors to be who they really are--basically us, only with better means to pursue bigger folly. Like us, they scrabble after the newest, brightest bauble dangling before them; like us they overreach, and are hurt when they fall.

Perhaps the key scene in the film is when the now-wealthy Kaguya overhears partygoers gossiping about her father. For once the truth, unvarnished; the mask slipped, the divider between classes taken away, she sees how ugly people can be. Her response inspires one of the most expressive passages in the film, when the world turns tremulously charcoal dark, and her sense of self-disgust is powerful enough to drive her out of the city and into the countryside, where she feels at home.

But where is home? When she arrives the village is empty; all the people have left including Sutemaru, now a young man. If the nobility are drawn by pleasurable attractions the lower classes are driven by plain necessity--in this case the plain need to find employment; Kaguya belonging to neither finds that in evading one she has lost track of the other. When she meets Sutemaru again he asks her to run away with him, she throws her arms around his neck, and--

Kaguya's flight with Sutemaru is more than just a virtuosic animation exercise; the sequence helps crack open the boy's character. You might say Kaguya provokes people into acting out their true natures--scratch a nobleman and you expose a lifelong social climber; scratch a prole and you expose a dreamer yearning not for more (more things, more money, more power) but less. Like Sutemaru the ordinary working man wants to shrug off the bonds of marriage, the obligations of a working man, the very laws of gravity; he wants to clutch the hand of a beautiful girl who loves him and take off with her into the endless blue. 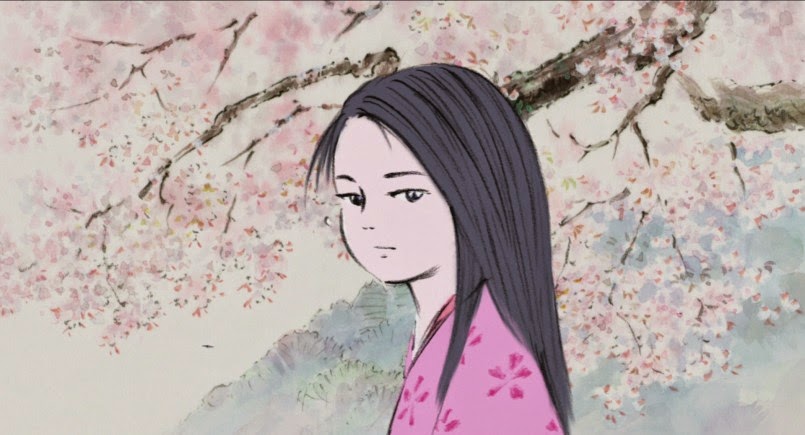 Might be too much to ask for a second key scene, but in the back of Kaguya's mansion is a little garden plot on which her mother Ona insists on raising vegetables (unlike Sanuki, Ona hasn't lost either her agricultural roots or her sense of proportion). Kaguya invites Ona to lie down and look through the grasses--at ground level, the garden looks like their old village: dirt mounds for the nearby hills, mugworts for the surrounding forest, grass blades for the bamboo grove (what looks like a mushroom cap stands for their little shack). It's a magical moment that paradoxically involves no magic at all, just the willingness to see things from a different perspective--a lesson Sanuki has forgotten (when he says 'it's me Heaven's blessed!' he doesn't realize exactly how he's blessed, or how he's throwing said blessing away with both hands). Also a lesson Takahata teaches his characters and the audience again and again, his camera wordlessly asking the question constantly in Kaguya's mind: What's her purpose in life? To which social class does she truly belong? From what angle must we view Kaguya, and why?

By film's end Kaguya learns all, steps up to assume her proper position in society (you might say the film is really a fable about finding one's proper level in life). It's a bitter lesson all around: that some social classes are fixed so high (as in astronomical) they're impossible to reach; that some social expectations are so impossible to meet they're (literally) inhuman, enforced in an inhuman, implacable manner; that all things change, and pass, and fall away (the Japanese call it mono no aware--the tragic beauty of transience, if you like). And that Takahata has--again--skewered our expectations (and hearts, for that matter) through the simple act of bringing a story to its inevitable, unforgettable conclusion. 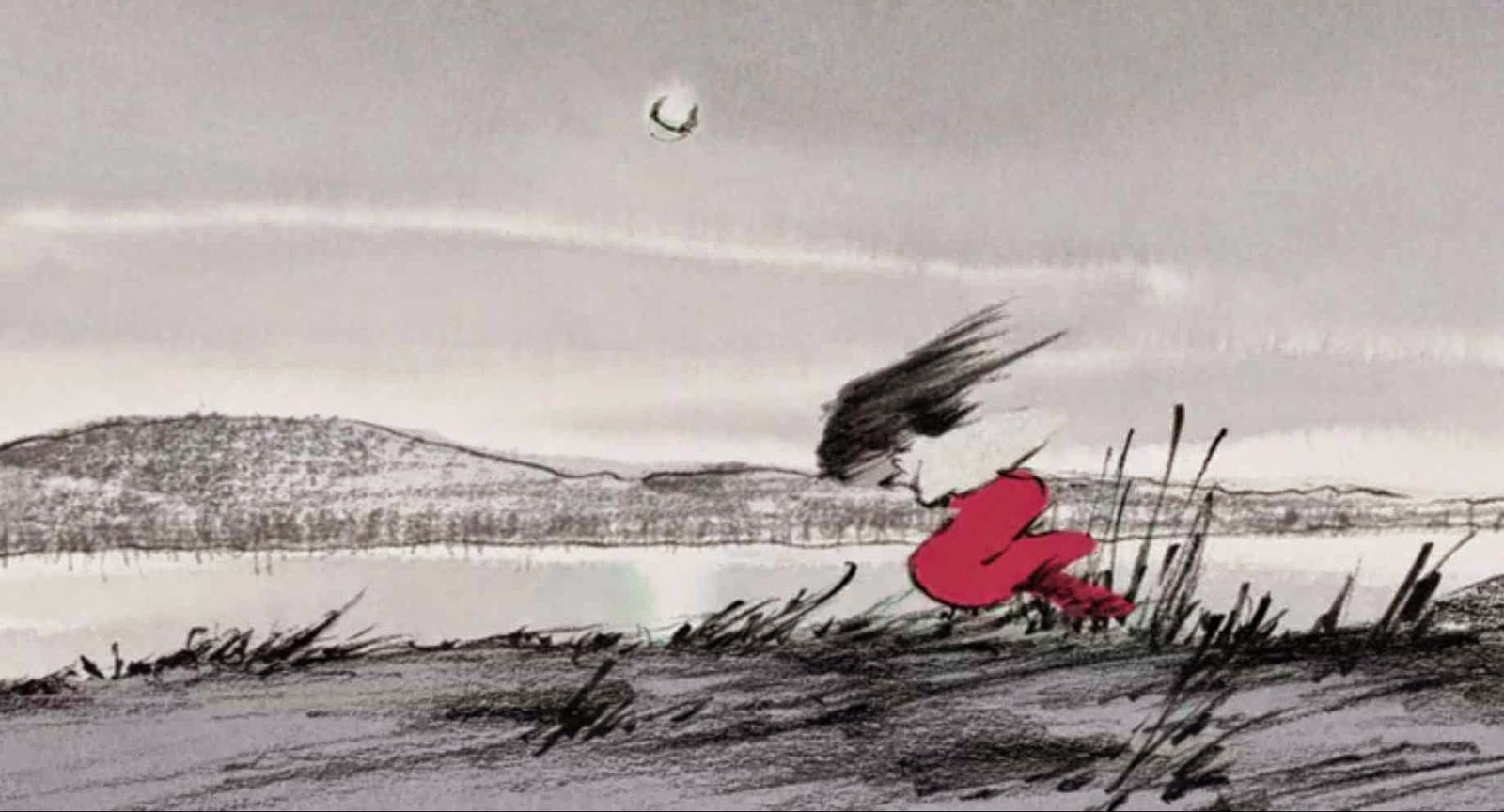 It's interesting how Takahata has changed the ending. He made the Emperor unsympathetic, so Kaguya no longer gives the Emperor a bottle for longevity, the pining Emperor no longer sends soldiers to the highest mountain to burn a love letter and the bottle, history no longer renames this mountain as 不死, which means the same in kanji as it does in Mandarin Chinese: "no death", later to become 富士, or Mt. Fuji?
I love this ending, but like "The Fly", both the original and its remake, they changed the story, they had to jettison the memorable ending.

I must have read (or skimmed over) 40 reviews since I saw this yesterday morning, and, as ever, the quality of your insight was far above that of any other. Thank you.

The striking reaction I had to Kaguya was the effectiveness of the swift mood swings. I was enjoying Kaguya's tragicomic adjustment to her life in the city - in the words of her teacher, she acts as if it were all a game (she's clearly too intelligent to care much for it all). But then that scene happens, stunning me cold. My laughter was chilled, to say the least. Then later she deftly evades the suitors, sending them on ridiculous challenges befitting their ridiculous declarations. And then one of them dies trying. And soon after, there's the Emperor's horrible embrace, her terror forcing an unconscious calling out to her true family. Such desolate moments become more frequent and prepare the melancholy of the ending.

Takahata displays a mastery of form, as ever. I particularly appreciate how the colour fades from the backgrounds as the film progresses away from the countryside, reflecting Kaguya's alienation. And as the regal characters are drawn with detailed, hard lines, wearing bold colours, more backdrops are left "unfinished".

I think Robbie Collin in the Telegraph is right to say that "Ghibli has one more film left to release before it goes into indefinite hibernation (the ghostly coming-of-age story When Marnie Was There), but as you watch this, you sense the studio’s life’s work is being completed before your eyes, like the sails are being raised on the most magical ship-in-a-bottle ever built."

Joe Hisaishi's music was superb too, appropriately subdued and restrained. I'm sure I caught several melodies calling out to earlier Ghibli OSTs (one from Grave of the Fireflies, one I couldn't place). Can't wait to see it again.

Thanks. Good call on the gradual loss of color. There's a mailing list for English speakers called the Nausicaa Mailing List, and you can tell that activity there has been dying out since its heyday, in the nineties.