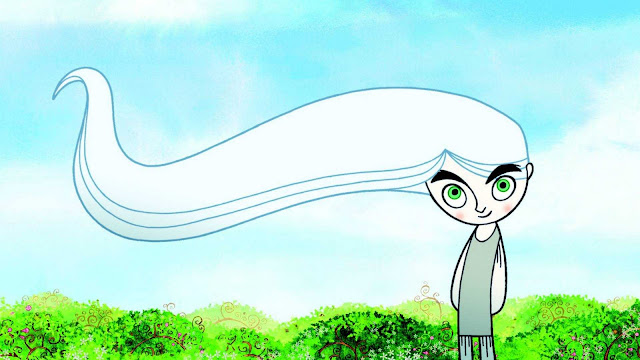 (Reposting--maybe I can't celebrate St. Patrick's properly, but I can at least pay some kind of tribute)


Tomm Moore and Nora Twomey's Secret of Kells was a nominee for the 2010 Oscar for Best Animation Feature, but don't let that discourage you--this isn't some Pixar wannabe, all ingratiating characters and a storyline designed to wring tears from your eyes, done up in soulless digital animation. There's real passion here, not just directed to the heart but to the mind, and enough ravishing imagery for one's mind and heart and eye to feast on till overflowing.


The film is told mainly through the eyes of Brendan (voice of Evan McGuire), a novice monk living within the fortified walls of the Abbey of Kells. Outside, it's the latter half of Christianity's first millennium, with Viking raiders burning down villages, and the abbot (voice of Brendan Gleeson) devoting considerable time and manpower and resources on the abbey's defense. Enter Aidan (voice of Mick Lally), a famed illustrator who studied under St. Colum Cille (St. Columba); he is fleeing the Scottish island of Iona, which has been sacked by Vikings, and carries with him a partly finished Bible which he himself has been illuminating. Celebrity artist with a secret treasure, telling a story of destruction and escape--how is a young and innocent Celt like Brendan to resist? To add complication Aidan needs green ink for his work, and Brendan volunteers to find the rare berries required in the surrounding forest; he ends up befriending Aisling (Christen Mooney), an apparent wild child / forest spirit / wolf girl.

The film does feel like your average animated fantasy feature at first, like the Star Wars series or any dozen Disney or Pixar extravaganzas--lonely young hero, forbidding father figure, wise old mentor, possible love interest, dangerous quest; in the margins are jokes a-plenty and action and hairbreadth escapes galore. But not many fantasies prominently feature a book at the heart of their narrative and as object of adoration the Book of Kells, as this particular book eventually became known, is as fabulous an object as any you can possibly think of--it's a real book, an illuminated bible, the prized possession of the Old Library in Dublin's Trinity College, and widely considered to be the single most precious artifact in all of Irish culture.

The film opens with a chase--Brendan and three men hunting down a panicky goose across the abbey courtyard, presumably for the cooking pot. Neat slapstick action immediately captures your attention but also pointedly illustrates (in comic form) the monks' obsession with the film's true subject matter (not so much goose meat as goose quills). At one point we see the book's cover, which closely replicates the intricate details of the actual book (Moore has a glint flash across the book's surface to suggest its brilliance); Brendan eventually finds himself working on a crucial page of the book's calfskin, lovingly rendered by animators--this page later becomes a beloved keepsake, hidden away for years. Difficult to find a movie, much less an animated feature, that invests so much emotional intensity into the bound volume, and its accompanying painted images.

Sneaking out of the abbey, Brendan tells Aisling "Aidan is my friend. I'm helping him make the most incredible book in the whole world! He says it will turn darkness into light. Wait until you see it!" To which Aisling replies: "Wait until you see the rest of my forest." If the monks can only think of the illuminated page (aside from the killjoy abbot, who can only think of the coming barbarians), outside the walls is an entire world being shut out, the forest surrounding the abbey. It's as if the film has a split personality--half its energy and running time is devoted to the abbey with the book as its emotional and dramatic core; half is spent on the vast, mysterious forest, full of wolves and spirits and marauding hordes and the occasional Celtic god. And here's the true mystery, Tomm Moore's visual coup--the two are linked. The forest trees' branches spiral and swirl in graceful curves, festooned with leaves and fruits and birds and insects and the same spirals and swirls, similarly adorned, are found in the book's pages; Brendan confronts the Crom Cruach, and it takes on the form of a massive serpent that might have slithered in and out of the letters of the book's alphabet. Moore acknowledges that much of the forest's design was taken from the book (which uses designs not just out of Celtic art, but from all over the world--some were found to have been taken from Moroccan art, for example, hence its richness), but one can easily imagine it the other way around, that the book's wondrous artists had looked around them, and were inspired accordingly.

I love the transitions. Characters moving from one place to another, or experiencing the passage of time are often treated as mere filler in animated features; here Moore regards the transitions as a chance to shine. He wipes the screen with falling leaves, or divides the screen into three tree-lined boulevards, like a triptych; in a later triptych he has characters pass from one section to another, and as we see them pass we notice them growing older, more bent.

I love the encounter with the Crom Cruach which apparently occurs deep underwater (aren't anxieties--such as the ones crippling Brendan's confidence and sense of self-worth--often described as 'free floating?'), and that Brendan battles the serpentine deity with a last-minute improvisation, a struggle by the graphic line for control over the storyline. I love it that the abbot, so grim, so self-contained, so disapproving of Brendan and Aidan's adolescent enthusiasms, reveals himself to be a closet artist as well, sketching intricate plans and blueprints for his massive abbey defenses all over the walls of his personal chamber, obsessing in effect on his masterwork.

Most of all, I love the way the story turns, or doesn't. This is when the film starts becoming more than just an animated fantasy and starts to become great--the Vikings hack and slaughter, the abbot builds and fortifies, Brendan and Aidan dream of their emerging book. The plot unfolds relentlessly, with destinies determined by the shape of one's character; Moore doesn't give us last-minute miracles or heroic rescues. In this he approaches the emotional relentlessness of Hayao Miyazaki, or even Isao Takahata (whose Grave of the Fireflies in its plainspoken honesty is possibly the single most heartbreaking film ever made about the Second World War)--he allows the drama to play out as it will, and should. Easily one of the finest and most moving animated features to come out this year, or several years; more, it should be seen again and again, just to catch all the little details one might have missed the first time around.

You forgot Andrew Jackson’s Big Block of Cheese with nary a macaroni in sight.

I much prefer Isaac Bashevis Singer's breakfast of bagel with smoked whiting.