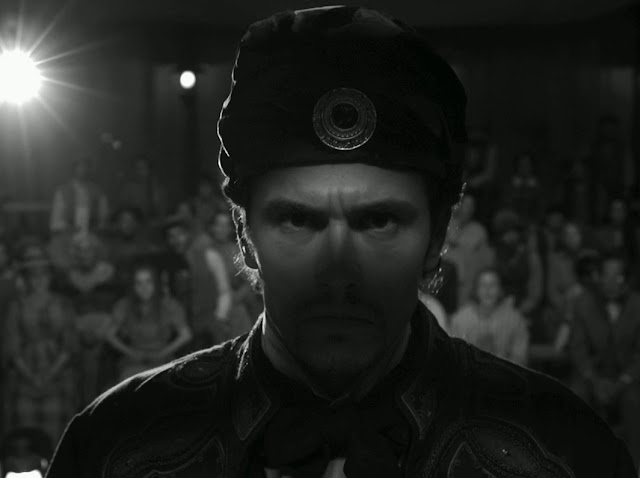 Never had much use for boxoffice figures; never thought the approval of the moviegoing public was all that important, or an indicator of a film's quality, or relative lack of.

Once in a while, though I find myself in the embarrassing position of agreeing with everyone else. In which case I plead pure coincidence, and point to that old adage--how does it go again? A stopped clock is right twice a day?

Well, maybe not that one. But I do suspect that public opinion is smarter than the critical establishment is willing to admit.

Case in point: Sam Raimi's Oz the Great and Powerful. Critics describe it as not "knowing its own mind," or "visually overcrammed, empty mega-spectacle"--which is funny, because Raimi has never been known for sticking to one genre, even in his own movies, and was never a believer in visual restraint. The man likes over-the-top comic-book action, and unlike some filmmakers I can think of who can't even do that properly, he is superb at it.


But my favorite complaint and easily the most common of them all is that it doesn't come close to the original. Folks, lemme make a radical suggestion: the original wasn't all that great, either. It was almost as "overcrammed" a "mega-spectacle" that didn't know "its own mind" (at one point Dorothy sings "Somewhere Over the Rainbow," the anthem of everyone who ever felt unhappy about their present lot in life, at another point she's muttering to herself "There's no place like home; there's no place like home"--remember that over half a dozen people helped write the script). The flying monkeys were laughable, the Emerald City more quaint than impressive (they're the '30s idea of what the ultramodern urban future looked like), and I personally never did like Munchkinland--the sets were plastic and flimsy in the worse sense, and the poor Munchkins, with their thick makeup and orange hair! Never heard any of the actors complain, but they should have.

If there was magic to the movie it didn't come from the sets, or costumes, or directing (by Victor Fleming, a capable craftsman if not exactly an artist, though the Kansas sequences--shot by King Vidor late in the production--have the eerie, austere two-dimensional beauty of charcoal sketches). I'd point instead to Harold Arlen's songs, to Burt Lahr's brilliant Lion, and the lovely, emotionally vulnerable (almost painfully so) performance by Judy Garland.

Is it a wonderful movie? Sure; but it was also scattershot, out-of-control, all over the place. It had plenty of dud moments (what was the point to the poppy field scene? And I suppose it's just me, but Jack Haley's Tin Man was an annoying, useless drag). It was hardly the work of an artist in complete control, as Salman Rushdie points out in his brilliant deconstruction of the film, possibly one of the rare examples of an 'authorless text'--or as close to it as possible.

Which brings us to Raimi's picture. Which if not completely respectful, shows considerable affection for the original (including a better use for the aforementioned poppies); which takes the tacky set designs of the original and reimagines them on a sleeker, darker, grander scale; which puts at the center of things not a Dorothy ("the small and meek"), but Oscar Diggs the brash and crafty--Raimi's latest incarnation of his Ash ("Housewares!") from the Evil Dead movies, a more comic, more capable, and in some ways more interesting character stranded in worse circumstances (he doesn't have a good witch for an occasional guide; he's not even sure who are the heroes or villains in this particular landscape). People like to take pot shots at James Franco's stoner wizard, but I say he's serviceable, and that any number of actors could have done as well if not better, and quite a few worse (Bruce Campbell would have been ideal, but he's too old (he does a cameo here); Robert Downey Jr. would have been brilliant, but probably out of Raimi's price range; and can you imagine how Jim Carrey would trash the production?).

As with the original, you're not looking for a lean script and coherent narrative; you're looking for setpieces, funny exchanges, memorable moments--the best in this case being Raimi's horror-film images: the Wicked Witch arriving like a meteor in Glinda's soap-bubble domain, then rising out of the flames like something from The Wicker Man; the same witch minutes earlier, clawing at the top of a table as if she were The Creature coming out of the Black Lagoon.

Not just horror film imagery, though--Oz dancing with the drop-dead gorgeous Theodora (Mila Kunis); presenting her with the music box (a running gag that at one point is rudely crushed by a Strong Man who knows better); Oz using glue to piece together a China Girl's shattered leg; and so on.

By film's end Kunis' Theodora has developed into something almost tragic, and Oscar yes does experience some kind of redemption. But how many battles do you see nowadays where one used brains instead of ballistics to win, used imagination and craftsmanship instead of the usual high-powered automatic weaponry?

It's not great filmmaking, it's arguably not the best new treatment on Oz out there (Walter Murch's largely forgotten Return to Oz is beautifully dark and grim; Wicked is a novel-length prequel and sequel to Baum's book, later turned musical; Tin Man is a science-fiction variation) and it's far from being the best thing Raimi's done. But it's alive, in a way most megaproductions aren't, with a look as inventive and slapped-together as Raimi's Evil Dead movies. It's fun, and I submit this is what all those people were responding to when they made the picture a box-office hit.

Nicholas Winding Refn's Valhalla Rising is a bleak, almost dialogue-free tour of the New World, an early work from the filmmaker who recently gave us Drive. Outrageous deadpan violence (at one point the hero uproots someone's large intestines with barely a flicker on his stony expression, as if he'd been picking through the man's pocket for loose change) set in the icy reaches of the Scottish Highlands.

Easy to make fun of this picture--our heroes (a gaggle of Crusaders who have adopted a mysterious Norse warrior named One-Eye, and taken him on a quest to fight in the Holy Land) wander around helpless, not a little like King Arthur and his knights in Monty Python and the Holy Grail--only with Holy Grail you know you're supposed to laugh. Refns gives you no clue at all how to react to this--no French knights needling you with Gallic insults and highflung cows--but the clumsiness and fumbling about is almost the same.

The film also reminds me of Herzog's Aguirre, der Zorn Gottes only compared to that film Valhalla looks sadly sane and rational--where Refn's One-Eye sees his visions in wild, saturated colors, Aguirre's visions become more and more indistinguishable from reality, become (in effect) one and the same. Both heroes are stranded in an unfamiliar wilderness, both experience Hell on Earth, but where one warrior falls into a deep peaceful slumber, the other manages to shrug off his mortal limitations and launch into the thin vapors of insanity. If ever given a choice, I believe I would vote for taking off and vaporous insanity.

For the record, I don't think Volver is Pedro Almodovar's best work and don't think Almodovar is the best director of camp melodrama around (give me Joey Gosiengfiao, whose Temptation Island was ballsier, more deadpan surreal than Almodovar could ever hope to be, and at a fraction of the production cost).

Of course it could be argued that Almodovar did what Gosiengfiao couldn't do--transform himself as an artist, turn himself into the serious dramatic filmmaker he always aspired to become. I've always maintained (and I know I'm in the minority on this) that Almodovar didn't so much grow up as sell out, traded in his outrageous shock sensibility for more conventional scripts and artistic respectability. You might say it was as if Gosiengfiao had magically transformed himself into Lino Brocka--Philippine cinema would have been all the poorer for the loss in variety, the loss of a unique voice.

Almodovar's scripts I submit play better to the ear (or at least read better in subtitles) than to the eye; aside from his much vaunted color schemes (which, yes, shock eye and mind into a kind of heightened receptivity), there doesn't seem to be much to his directing here, certainly not enough to justify the world-wide reputation. Especially disappointing is how Almodovar handles the crucial scene (skip the rest of this paragraph if you haven't seen the film) where Penelope Cruz's Raimunda finally meets her long-lost mother, Carmen Maura's Irene, which Almodovar shoots with matter-of-fact flatness, as a series of closeups--after all the buildup, all the grief and loss endured, to end up with only this? It was as if Almodovar had lost all interest in the story and just hurried the reunion on, hoping to find something more interesting down the road.

William Wellman's great Story of G.I. Joe views the Second World War not from some elevated vantage point (the way say The Battle of the Bulge or Patton or even Spielberg's Saving Private Ryan occasionally does) but strictly from ground level, from the grunt's eye level. The film has its moments of great suspense (a sequence where the soldiers explore the ruins of a bomb-blasted church, and death literally pops out of anywhere), but the bulk of the picture focuses on the dullness and tedium in between action--which hardly makes the film dull (Wellman's focus is on the soldier's reaction to the tedium). The mediating consciousness is Pulitzer Prize-winning Ernie Pyle's combat journalist (a fine, heroically quiet performance by Burgess Meredith), who watches these men with at first muted skepticism, then growing admiration, then in the end an abiding affection; the way his regard for the men changes and develops over the long stretches he spends with them--or even meeting them again, after long stretches spent without them--is the dramatic spine of the film.

Can't talk about this classic without mentioning Robert Mitchum in his career-making breakout role. You don't see the lazy insolence of Mitchum in his later roles; instead you see the weary veteran who gets the job done, who dozes off during quiet moments out of sheer exhaustion, who invisibly, without much fuss or bother, comes to occupy a central portion of his men's hearts. So when (if you haven't seen the film, skip the rest of this paragraph) his body is carried by mule down from the battlefield, to be laid down like a sack of potatoes on the muddy ground, the tribute the men pay to him--walking past his body in mute, inconsolable grief--is almost heartbreaking. A great, great film.

Saw this from wikipedia: "On February 12, 1939, Victor Fleming hastily replaced George Cukor in directing Gone with the Wind; the next day, King Vidor was assigned as director by the studio to finish the filming of The Wizard of Oz (mainly the sepia Kansas sequences, including Judy Garland's singing of "Over the Rainbow"). In later years, when the film became firmly established as a classic, Vidor chose not to take public credit for his contribution until after the death of his friend Fleming in 1949." I wonder what the movie would have been if Fleming wasn't assigned to GWTW. By the way, why was Cukor fired?

Far as I know Cukor was just helping out, filling in for Richard Thorpe when he was fired. The man didn't shoot anything, just made a few changes to character designs and acting styles that helped the film out a lot.