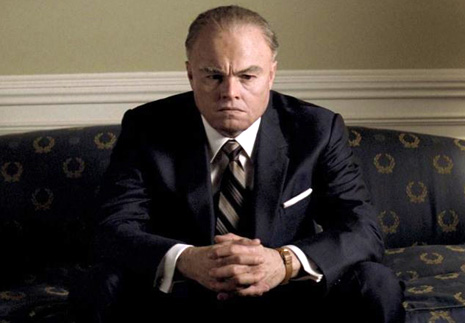 
Clint Eastwood's J. Edgar, his biopic about the legendary director of the Federal Bureau of Investigation, turns out to be his most tender and fully realized love story.

It doesn't quite start out that well. First time we see J. Edgar as played by Leonardo DiCaprio, he's wheezing along under pounds of prosthetic makeup, meant to make him look old. The makeup is a horrific mess; DiCaprio looks like a half-melted version of himself,  a doughy dumpling that had been left turning in the microwave some twenty seconds too long. Eventually, after one gets used to the unholy pancake mix, and especially after the film presents the younger J. Edgar (DiCaprio sans makeup) and allows us to see the differences and similarities between the two expressions the character's true nature emerges: an intense young man whose focused gaze with the passing years settles into a grim glare (actually he looked uncannily like any number of grumpy old men from childhood, scowling with disapproval when they looked in my direction). We're talking about a man whose basic nature doesn't change but because the world around him does, his significance to that world changes considerably.

The story moves back and forth in time, the later scenes meant to comment on the earlier (a classic tactic, popular with recent biopics). The story really comes to life, however, when J. Edgar meets the love of his life: Clyde Tolson (Armie Hammer), first a prospective agent, later Hoover's protege and Assistant Director for the FBI. Their initial meeting plays like a meet-cute--J. Edgar is intrigued by the young man's qualifications; soon they're having meals together, shopping for clothes together, so on. Without much comment or fuss, they move gracefully into a comfortable relationship that in its first major crisis (involving Hollywood star Dorothy Lamour) erupts into a full-on lover's quarrel, all passion and hysterics and a single, startlingly uninhibited kiss.

Part of what makes that kiss such a surprise is that there's so little overt physical evidence to suggest such passion; you need to listen carefully to hear the emotions simmering beneath the narrative surface. Dustin Lance Black, no stranger to LGBT material (he wrote the screenplay to Gus Van Sant's entertaining Milk (2008)), tries to make the case that what Tolson and Hoover had was less than a gay marriage, more than just heterosexual friendship. It's a delicate balance he's trying to suggest, and the closest parallel I can think of is the relationship evoked by Anthony Burgess in his novel Earthly Powers, where a gay man (writer Kenneth Toomey) and a straight man (Dr. Shawcross) fall in love. As Burgess writes: “Whatever word I use will probably be wrong...we’ve just been here together. We didn’t have to put it into words. I was never so happy in my life.” It's not physical--which is what everyone assumes, or is interested in--but it is every bit as knotty.

Eastwood's direction plays a crucial role here. What's needed is a straightforward presentation, done at a leisurely, deliberate pace; Eastwood takes the skills he's perfected in Bridges of Madison County (1995)--that patient, novelistic way he has of constructing a relationship, one mortise-and-tenon joint after another--and applied them here. This isn't a tempestuous love affair but a lifetime companionship, less motel-room beds and crumpled sheets and more like an overstuffed living-room sofa, smelling faintly of pet dog.

Eastwood and Black are to be congratulated for their detailed and singular sketch; one wonders, though--does the man deserve it? J. Edgar comes off looking so faithful and temperate (at least domestically) that the film comes off looking like a professional whitewash job. Oh, there's a scene--tellingly, with Tolson dominating--where all is called into question postmodern style, and J. Edgar is accused of manipulating his own narrative to look good. Props are due for the inclusion, but it may be too little, too late: where are the scenes revealing constant persecution and humiliation of, say, Martin Luther King, Jr.? The footage showing how J. Edgar's active participation in the '50s communist witch hunts resulted in thousands of government workers losing their jobs? Where's the “Lavender Scare”--the hunt for homosexuals (often assumed to be also communists) so virulent it defeated Democrat Adlai Stevenson's run for president? J. Edgar was a powerful enough and monstrous enough presence to have warped the American landscape for almost fifty years, but all we see here is J. Edgar the tender and intimate BFF; Black could at least have used some of the unused material for dramatic contrast.

One of the better films of the year, then, with the caveat that it could have been so much better--great even--if the filmmakers had along with its surprisingly soft core given it a little more teeth (and to said teeth a little more of an edge).

non-fan-of-Clint E when he directs said...

Leo looked like Philip Seymour-Hoffman for about 3/4 of the length of the movie.

Hm. I don't see it. He does look familiar--can't just place who I'm thinking of...

I used to think of clint eastwood as maker of important statement movies that's why i avoided most of them. They look so boring, his movies! But then i saw this and thought, it's as sweet as that other lovely, lonely gay romance brokeback mountain. What a sweetheart.

Actually not a fan of brokeback mountain. I think this one is much subtler.