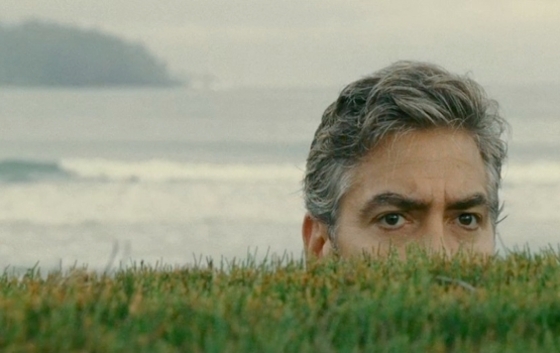 Alexander Payne is, arguably, the modern poet of the battered male psyche (see Matthew Broderick in Election, 1999; Jack Nicholson in About Schmidt, 2002; Paul Giamatti in Sideways, 2004). If he succeeds at articulating the triumphs and sorrows of this particular sub-species of homo sapiens, that's because he's totally inside his main male characters' heads, knows their considerable flaws and occasional virtues inside and out; if he fails that's possibly because said psyche isn't exactly what you'd call limitlessly profound, bountifully intricate territory for thorough excavation; at a certain point you're going to hit rock bottom.

Better Payne than his more commercially successful contemporary, Judd Apatow; the latter rakes in all the bucks because he makes comfortable comedies, where the flawed male is humiliated then vindicated, and along the way his hottest fantasies are fulfilled to overflowing (see Knocked Up (2007), where a total loser manages to impregnate a totally hot chick and no one in the audience cries “Foul!” (well I did, but the people around shushed me down)). Payne lives up to his surname; there's a knotty integrity to his selfishness, an agonized, self-conscious honesty to his self-regard; if he knows his males far more thoroughly than his females, if he is able to dissect them more precisely, he does acknowledge this slant in his scripts, and gives the males no lasting advantage over the fairer sex. Equal opportunity suffering, with more opportunity to laugh at the men than the women.

To that list of memorably muddled men add George Clooney's Matt King, great grandson of Princess Kekipi and her 'haole' husband Edward King, who in turn was the last direct descendant of King Kamehameha. King sits on a sizable legacy: twenty-five thousand acres of prime coastal land that he co-owns with his cousins, a varied and considerably grizzled shorts-and-sandals group, the most vivid of which is his cousin Hugh (Beau Bridges toasted to a perfectly caramel George Hamilton tan, with a perfectly crispy performance to match). Matt can't focus on the impending sale, despite all the money it promises to deliver: his wife has had a boating accident and lies vegetating at the hospital (the film's opening is remarkably spooky: slow-motion footage of a woman on waterskis, flying past the camera--we eventually realize this must have been Matt's wife Elizabeth, just moments before her accident). Matt, the self-described 'backup parent,' has to step up and take charge of his two daughters, chubby Scottie (Amara Miller), and teenaged Alexandra (Shailene Woodley). Matt struggles to control them, to establish his patriarchal prerogative; out of frustration Alexandra drops a social, psychological and narrative bomb: mommy had been seeing someone when she died.

Matt trying to sell his legacy and looking to confront his wife's lover are the twin engines that drive this film's narrative, but they're not what the film's really about, I think. This is about people interacting with each other, establishing territories, boundaries, lines of cooperation and communication, resolving the unresolvable--with compromise, cash, and the occasional sudden right hook. Matt has never handled Scottie before; what is he to do when Scottie throws a tantrum? Likewise, Alexandra has probably never spent such an extended amount of time with her family before--to cope she brings along her boyfriend Sid (Nick Krause), an unstoppably tactless lout. You can see trouble brewing a mile off--or can you? Turns out Alexandra can be both hindrance and help, and Sid has his moments (fleeting and rare, and yet and yet) of insight. Matthew Lillard as Brian Speer, the real estate agent that doubles as Elizabeth's lover, sounds like a self-satisfied boor until Matt throws the man's infidelity at his face; suddenly he's a father pleading pathetically for the sanctity of family (his family, of course, not Matt's). Toss in Robert Forster as Elizabeth's irascible father--every time he sees Matt he can't help but put his son-in-law down, and his very presence is irritating until you realize what all that anger really is: a way of expressing the pain he feels at losing a beloved daughter.

It's all fine performances--no, it's all finely drawn characters, crawling all over this verdant chunk of volcanic rock most people would deem paradise. We see the paradise (the film is capably lensed by Phedon Papamichael (he shot W. for Oliver Stone, and came up with the beautifully modulated, near-Mediterranean sunlight for Payne's Sideways): possibly the most memorable shot in the entire film is when Payne pans from the family on foot walking downhill to the wide crescent of lush wild grass surrounding an azure bay that is the family property. The challenge is to convince us that despite all that natural beauty Matt and his family are still capable of being unhappy, still capable of seeking (and eventually deserving) some measure of peace. I think Payne succeeds, at that.

Nice post, I thoroughly enjoyed this film. Interesting to me how they managed to film Hawaii as such a depressing place for most of the film. Also found the soundtrack to be amazing. O and Woodley got hosed in not getting a best supporting nod IMO.

enjoyed checking out your blog

Funny, no it doesn't look depressing. I think they managed to suggest King's mood to you despite the visual beauty of the place--the way Hitchcock would suggest danger in a brightly lit wide-open landscape. Not an easy thing to do, I think.

Saw this a few days ago on HBO. George Clooney’s role of a lifetime, I think. I like how the lush, verdant landscape and the laidback Hawaiian life balance the somber elements of the story. I also like how comedy becomes part of the story’s fabric. The movie’s both funny and sad. George Clooney powers the film. I didn’t realize he’s such a good actor. That scene when Matt says goodbye to his wife Elizabeth for the final time, it was low key, intimate, yet packs a wallop.