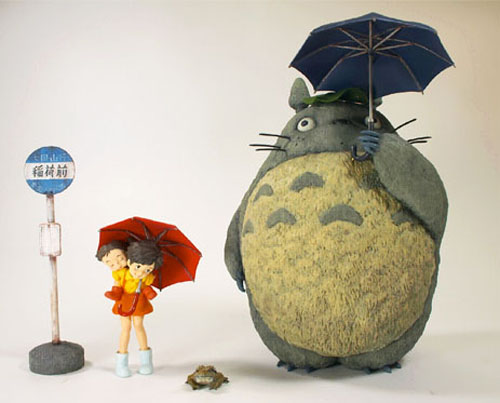 (Just in time for Father's Day, a little skit about Toy Story 3.

Scene: Dad and son, coming out of the multiplex)


D: I don't know, I spent twenty-six dollars on our tickets, you could at least tell me why 'it's' only 'okay.'

S: Well--for one thing, the movie's mostly for kids.

D: Never mind. And how is it 'mostly for kids?'

S: --only ten, Dad, I know. Remember that TV series we watched last year, that Master something...?

S: Yeah, that one. I learned something about Greek culture, and Roman culture, and even how to fight back against two men with guns when all I have is a spoon, how to survive in the desert, all that. What did I learn from Toy Story 3?

D: It's dangerous to be garbage?

S: I keep thinking the Japanese are more adult or advanced when it comes to animation. At least they put in more cool stuff.

D: Didn't you at least find the jokes funny?

S: Oh, they're funny. American animated movies are always funny, and they make cool chase scenes. But even when they say they're doing grown-up stuff, they're only saying that. They haven't grown up, not really.

D: Haven't grown up? But the movie's about Andy leaving his toys behind. And that incinerator scene--

S: Andy's leaving his toys behind, but why the big fuss? Where is it written that toys have to be played with, or that a toy's greatest purpose is to give a child joy? If we're talking about toys that can think for themselves...I mean, what about that other movie, about toy soldiers against, whatchamacallem, those toy monsters--

S: Yeah. The toys in that movie liked the boy and the boy cared for the toys, but they didn't hold on to each other as if they'd die if they let go. The toys up and went their own way, had their own adventures.

Woody and Buzz and company, they're so darn clingy. If they were my toys, I'd have donated them a long time ago.

D: And the incinerator? When they were clinging to each other and getting ready for the end? Didn't that make you tear up, just a little bit?

S: That's your fault, Dad. Remember when you showed me that movie about the two Japanese kids in World War 2?

S: They didn't have a pair of aliens send down a crane arm to save them, did they?

S: I liked Graves. It wasn't as funny or as fast-moving as this movie, but it was, I don't know how to put it. Honest? The movie just told things the way they are, no fooling.

D: I remember you didn't cry in that one either.

S: I promise not to tell anyone, Dad.

D: Tell anyone, about what?

D: Who said anything about me crying?

S: Jacob B. told me his dad cried when they saw Saving Private Ryan. I almost cried when I saw Grave of the Fireflies, only I didn't.

D: So you won't tell anyone?

S: No. And it wasn't just that one. You showed me another movie from the same guy, the one about raccoons?

S: In some ways that was actually worse than Grave of the Fireflies. Grave you had only two kids. Pom Poko it's like a whole people gone--poof!--just like that. That's your inniserator moment.

S: Incinerator. So I've seen death and dying before in cartoons. This wasn't anything new. Plus I had another problem with that part of the movie.

S: That Lotso guy--he was nasty, right? And then they saved his life, right? So why did he turn back to being nasty?

D: Because it's his nature?

S: Then why did he bother acting grateful? That really bugged me. If someone saved my life, sure I can get nasty on them afterward, but there's got to be a good reason. I can't just change my mind in the middle of the action. I hate it when people pull that on me in a movie.

D: At least he got what he deserved.

S: Hung up in front of a truck, eating bugs for the rest of his life? Okay, maybe. But we're suppose to find that funny?

S: It's--I don't know how to say it, Dad. Too loud? Too pushy? Like they're trying too hard to make you cry? After the movie I wanted to wash my hands and face, I felt so sticky.

S: Yeah. Did you see the totoro?

S: That was cute. It reminded me of My Neighbor Totoro. I thought Totoro was sadder, though.

S: Because the mother couldn't be home. Because the kids missed her. Because--I don't know, the movie isn't, uh

S: Yeah, pushy. The sad feeling is there, but you have to notice it. They don't whack you over the head with it.

D: Okay. So do you want to go for an ice cream sundae?

S: Can we watch another movie instead?

S. If it upsets you again we can talk about it after.

I think you're right about that.

I loved it until it stopped being fun.

Oggs, agreed: when it was fun I enjoyed it, but when it tried to touch my heart I thought it poured the emotion on with a trowel.

Classic Disney depends on how you define it. Some people consider pre-war Disney classic; I think Disney films were good until Disney died--101 Dalmatians was decent, and even Jungle Book had its moments (it was released a year after his death).

Disney had a mini-renaissance in the 80s--Little Mermaid, Aladdin, Lion King. Not a big fan--this was about the time they started turning ever feature into a musical, and tragic stories into happy endings (Little Mermaid, Hunchback). I thought that was obscene.

Disney isn't brash; it wears its heart on its sleeve. I much prefer the animation of Chuck Jones, Robert McKimson, Tex Avery, Fritz Freleng, the great Fleischer brothers--loose-limbed masters of comedy, which American animators excelled in, above all.

When it comes to drama, the Japanese are in general incomparably subtler--Miyazaki and even better, Takahata. And not just Ghibli directors; Taiji Yabushita and the great Osamu Tezuka are great storytellers.

We're not even talking about French, Czech, Chinese and Iranian animators here.

So Disney--he's okay. But there's much better.

I liked the short better.

The short had an interesting idea, but I thought it petered out--the two characters were too sunny, too eager to embrace each other. Can you imagine Daffy and Bugs in their place?

Oh, which reminds me.

If you haven't already seen it, they are streaming the first 40+ episodes of Masayuki Kojima's adaptation of MONSTER over at HULU:

(though, you have to register since it has a TV-MA rating... but it's good stuff)

That said, I've not seen this yet (I was watching a documentary of a popular Japanese Wood carver named K. Funakoshi)...

Ishihara's inability to stop being an overt otaku is a little disappointing given that he has a very interesting sensibility when it comes to violence: distraught by his world being turned upside-down by the disappearance of HARUHI, Kyon (the would-be male love interest who, for some unknown reason, hasn't asked the lead girl character out yet) starts to lash out at the people around him in his quest to ascertain whether or not he has gone insane... in a world that is, by all means, relatively more sane than the world he was used to.

Ishihara's surprisingly realistic treatment of the violence is mostly interesting here because it becomes challenging when the viewer begins to realize that the once likeable lead character from the TV series may not necessarily be likeable in this movie, despite the glaringly obvious happy resolution at the end of the tunnel...

It's... not pleasant to watch Kyon going around throwing tantrums, but it brings a more raw and human element that is largely missing from a series like this (Haruhi, in my mind, is pretty much a harem anime that's a cut above most thanks to the inherent cleverness of its animators).

That said, good read as usual; haven't been hanging around as much mainly because... well, at this point in time, I think I'm working towards law school.

But I'm always reading up, man.

I saw the first disc of Monster, didn't quite get me hooked. Might try again, this time the second disc.

I agree. The premise is interesting. Hand-drawn vs Computer generated; Night vs. Day; This vs. That... There's not much of a plot, just a redundant display of gorgeous imagery, visual gags, a questionable political statement that made the entire thing too obvious for my tastes. But it trumps the rest of Pixar's shorts (I know you'd disagree with the lamp short) for sheer ingenuity.

Oh, I like the lamps only because they seem to fit into computer animation's straight edged, smooth surfaced aesthetics so perfectly, yet are so expressive. It's not as if Pixar shorts are that great, at least not my favorite Pixar shorts.

Who is this wannabee critic here? Do you have anything between your ears? It looks like the only way for some nitwits like you to get some semblance of erudtion is to sound contrarian.

Eh, the way I see it, I watch a movie, I have a reaction, I explain my reaction in an article. If my reaction is in line with everyone else's, then no issue, everything's hunky-dory; if it's different, I contribute to the great variety of thought out there. Something like biodiversity? It's a good thing, you know.

I just want to know if you actually cried at the last part. Hehe.

loved this little script. you really could film this and put it on youtube. american popular media is so full of nothing but praise for pixar and an intelligently presented argument like this one would provide a great alternative perspective. especially in a dialogue between two characters which is a bit more subtle than someone just speaking to the camera like a video blog.

My evil twin brother and I once once auditioned for a Siskel and Ebert style TV program.