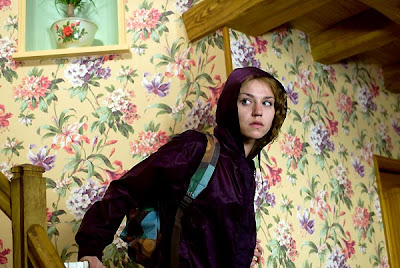 For the 15th French Film Festival:

Sometimes it's less frustrating, if not actually useful to describe a Techine film by what it's not. Based on what happened in 2004 to Marie-Leonie Leblanc, whose account of an anti-Semitic attack by six men of African origins touched off an international media firestorm, Techine's 2009 picture is not an analysis of the gullibility of politicians and the press, or of their eagerness to make political hay out of a lurid hate-crime story. Later it turned out that Leblanc was making it all up in a confused attempt to attract attention--but this film isn't about the accuser's reasons for fabricating the story, either. It's not some troubled-youth drama, meant to show us how clueless and confused our kids are--we do see and on some level sympathize with their confusion, but the film is playing a much more complex game than that.

The film is divided into two parts: “Circumstance” and “Consequence.” In the first half we're introduced to two families, the first of which is the Jewish Bleisteins headed by old Samuel (Michel Blanc), Samuel's son Alex (Matheiu Demy), Alex's wife Judith (Ronit Elkabetz) and Alex and Judith's son Nathan (Jeremy Quaegebeur); the second is made up of Jeanne (Emilie Dequenne, who memorably played the eponymous role in the Dardannes brothers' 1999 Rosetta) and Louise (Catherine Deneuve sans a celebrity's usual glamor accoutrements).

Though we come to know a bit about everyone, “Circumstance” is mostly Jeanne's story. She meets Franck (Nicolas Duvauchelle), a slightly disreputable champion wrestler with sleep-deprived eyes (it's the eyes that mark him as somewhat scary--you wonder what he's seen that has deprived him of so much sleep); she moves in with him, something goes badly wrong, and Jeanne is left alone and rejected. She takes up scissors, a knife, a marker pen, and starts working on herself.

“Consequences” expands on the results of Jeanne's act--the Bleisteins come to take over center stage, thanks to an appeal from Louise (Samuel long ago had a serious crush on her). The aging patriarch takes mother and daughter over to live with his family at their country home; ideally I'd say “and now things start to get interesting” only they don't--Techine has managed to maintain interest from the start, and does so with seemingly effortlessness.

It's not social observation, it's not melodrama condemning one side or another. One thinks of Jean Renoir's films, where “everyone has their reasons;” one also thinks of John Hughes' films which, as a critic once put it, reveals a filmmaker “spookily into kids”--a filmmaker with rapport and empathy and insight into how youths act and talk. Techine has a voice--or sensibility--all his own, though. He likes to use handheld footage, but not (as is usually done with handheld) to create a point-of-view shot or give his film a sense of cinema verite a la the Dardennes. He likes to stitch together shots of Jeanne walking, rollerblading, sitting in a hurtling train--trying, I think, to emulate the pace of Jeanne's life, over the trajectory of the film. At first she's just moving--towards what destination or what purpose, who knows; Franck has to chase her, to match her headlong speed before he can catch up with her, possess her. Later the traveling shots come to suggest that Jeanne's life is moving a bit too fast for her, somewhat out-of-control; when at one point she's locked into a cell, the pause or stability this moment represents actually comes off as a kind of relief.

Jeanne manages to hit the pause” button in earlier scenes, and in one of the film's most startling passages, it's when she sits in front of her laptop, sending images to Franck. The way Techine angles his camera there are times when the laptop's frame is completely obscured, and it's as if the two were in the same room, physically facing each other half-naked--when Techine cuts to another angle it's clear they're still before their respective laptops. Without using a line of dialogue Techine suggests the intimacy these two feel, gives one a taste of the flavor of their relationship.

You see Techine building up his sketches of people this way--not so much through dialogue as through spatial relationships, movement and posture. Judith either walks ahead of or lags behind Alex; Louise sits at a street bench, surreptitiously watching Samuel from the corner of one eye (they act like clandestine lovers at a secret tryst); Jeanne puts her head on Nathan's shoulder, and he visibly stiffens, startled and dismayed at the trust she has suddenly put on him.

I'd mentioned John Hughes earlier, and in fact Jeanne and Nathan's situation bears a striking resemblance to Samantha and The Geek in Hughes' teen comedy Sixteen Candles. Granted, Hughes' movie is ostensibly funnier, but it's often funny through cheap shots, the kind kids might rather see (the jabs at elderly relatives seemed distasteful while Long Duk Dong is practically a racist caricature). It's not entirely a youth film, though; Techine's understanding of Louise as a harried mother and Samuel as a weary but sane lawyer helps balance out the film.

Techine's film comes off as plain and direct, as truth; what happens between Jeanne and Nathan, between Jeanne and Franck, between Louise and Samuel, between Alex and Judith all have the complicated fascination of real people making a real effort to make sense of each other, to strike some kind of accommodation and live with each other (or not--you wonder how much ball-busting one needs to drive a man all the way to China). It's not always grim realism--some of Judith's barbed responses to Alex's sarcasm are laugh-out-loud funny, and when Nathan is exiled to his 'den' (a small shack in the woods complete with laptop) his expression of dejection is priceless. What happens in this film feels very much like life, in effect, though with a grace and visual beauty one can only find in art. Wonderful film.

I had trouble pinpointing where the film was going to take me, and as soon as I just let go, I had one heck of a time.

I agree with the observation on the webcam show. I think this is the first film I've seen where such internet romance/carnality is depicted with open and disarming intensity and sensuality --- it's been a while since that gag in American Pie.

No, not a lot of online eroticism onscreen.

Yeah, Techine if you fight him you'll end up disliking him. You have to see his films on his terms. And it's not as if he's brutish, or dictatorial; it's just that the mood he intends to create is that fragile--it'll vanish with the least resistance.

Oh yeah, touchless sex. It's the perversity of choice for this millennium, I'd say.