A pair of Burnetts: 'Nightjohn' and 'Selma, Lord Selma'

A pair of Burnetts

I suppose Selma, Lord Selma (1999) might be called Burnett's take on the Civil Rights Movement. Easy to wish it had been produced by anyone besides Disney, but thewish is a double-edged sword: if Disney had not coughed up the money, would there be a film at all?

about their experiences as black children caught up in the turmoil in Selma, Alabama where the population as someone in the film informs us is fifty percent black, though only a tiny fraction are registered to vote.

It's a TV movie; worse, a TV movie about a relevant subject--how much more deadly earnestness can you ask for? Yet Burnett's film feels like more than standard-issue and not just because of the subject matter--seems to me that telling it through the eyes of a child, in effect turning it into an eyewitness account a learning experience a life-changing moment for a girl of eleven is Burnett's way of presenting familiar material in a fresh way (and cannily enough a handy pretext for explaining history to fresh viewers).

Burnett often employs black music in its many forms (see Jonathan Rosenbaum's appreciation of his short When it Rains); here he makes full use of the movement's rich legacy of songs as transitional bridges, codas, inspirational pieces. At one point Martin Luther King (Clifton Powell) asks Sheyann (played here by a young charming--perhaps too charming--Jurnee Smollett) to sing "Ain't Gonna Let Nobody Turn Me Around."

Burnett frames King and Sheyann standing before an (unseen) audience, has King introduce Sheyann, then leaves her there; Sheyann looks about nervously (Burnett keeps the scene so quiet you can hear the audience murmur expectantly), sings a tentative line. A piano takes up the melody; a voice rises out of the audience, joining her--Sheyann gains confidence turns the song into a rousing up-on-your-feet-and-clapping number. Later, after the crushing despair of Bloody Sunday, Sheyann looks about her in that same church, sees all the men and women bruised and bloodied by truncheons and--again tentatively then with growing assurance--reprises the song; the people look at her in wonder, respond. It's an unforgettable moment.

Even that old standard "Kumbaya," endlessly parodied and ridiculed by more cynical generations, here regains its ability to rekindle tired spirits, particularly of marchers who have trudged many miles and have more to go.

One sees a bounty of visual grace notes--"little" is the operative word--Burnett's storytelling is so modest in spirit so dedicated to serving the drama's themes one has to seek out specific instances.

When King is arrested for example. Burnett gives us a shot of King in prison, angled and lit so that the paintpeeled bars obscure King's face. He's like an animal in a cage hunched over and waiting, a wall of curlicued white sealing him off from the outside world. But Burnett refuses to leave the man alone--the harsh daylight seeks out King's eyes, which gaze with a terrible patience.

When King speaks at Jimmy Lee Jackson's funeral Burnett's camera pulls back, revealing wreath after wreath of surrounding flowers, a mournful singer wailing in the background--as if Burnett, mindful of King's own fate a mere three years later was seizing this chance to pay tribute.

At the first march from Selma to Montgomery, Burnett shoots the tiny party of six hundred in profile as they cross the Edmund Pettus Bridge, the image dreamily lyrical as if the marchers were crossing into paradise. Later as the marchers confront the sheriff's men Burnett cuts to an overhead shot, the camera gliding right to left from far-below water to up-close asphalt, emphasizing the bridge's great height and lending the march this strange free-floating feeling, as if they were halfway to heaven (one marcher looking at all the officers and deputies blocking their way quips: "See that water down there? I hope you can swim because we're fixin to end up in it").

Working with Disney on a prime-time television movie Burnett has  developed the skill of depicting violence without being too explicit. The four girls killed by a bomb in Birmingham is mentioned and the relish with which their story is told is to my mind more appalling than any actual re-enactment. There are two shootings here and in both instances Burnett cuts away from the actual killing to other faces, either of the killer or of people affected by the death; Burnett focuses not on death but on death's repercussions, as if the souls in question are meant to haunt those left behind--to in effect haunt us. 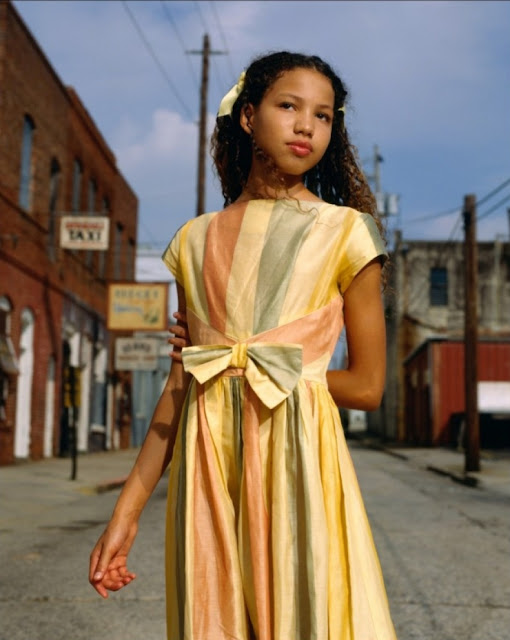 I can't say Selma Lord Selma breaks entirely free of its television roots--sometimes the visuals are flat and dull, sometimes the dramaturgy is awkward, crude. But at its best it has moments of power (I'm thinking particularly of a little scene at a water fountain) that give us back the movement with a freshly burnished glow.

I submit on the other hand that Burnett's Nightjohn (1996)--about perils of slaves learning to read in the early 19th century South--does in fact succeed in transforming the wholesome for-the-family TV movie format (Hallmark Channel produced, Disney distributed) into something unsettling (shown this to my students, and one of the most repeated questions was: "This was shown on the Disney Channel?"

Nightjohn apparently commanded a larger budget; the cinematography is more lush, the production values more elaborate. Carl Lumbly plays the film's eponymous role with laser-light intensity, fierce eyes framed by dark brow; can see the actor playing either Christ or Judas perhaps both (would have had more respect for Mel Gibson if he had cast accordingly in his sacred snuff flick).

Instructive comparing Burnett's film to Gary Paulsen's short novel. Paulsen, a popular writer of youth fiction, created a slim account of the cruelties in store for rebellious slaves in the South. That's what you remembered from the book: the sadism the graphic brutality. Slave owner Clel Waller was a "white maggot"--his characterization didn't go much further than that (frankly thought there was traces of reverse racism); Sarny was a mere narrator, Nightjohn a cipher, the book effective but inexpressive (oddly enough Paulsen in 1997 wrote a sequel titled Sarny, which seems to benefit somewhat from Paulsen having (strictly my suspicion no hard evidence to back it up) seen Burnett's adaptation).

Burnett with help from writer Bill Cain takes Paulsen's flimsy character sketches and brings them to fullblooded life. Sarny is a quiet yet spirited girl ("she's 'still waters,'" her guardian Dealey (Lorraine Toussaint) observes); John (as he's called onscreen) is a man who lost his family finds another along the way.

The biggest difference comes with Burnett and Cain's treatment of Waller. As Beau Bridges plays him Clel has an affable roguish charm; he's not a bad man or (key difference) doesn't think of himself as a bad man--he doesn't flagellate his slaves because he enjoys the act or needs to vent his frustrations (at one point he tells his son "I've never whipped a slave in anger"); he does so because it's expected of him, part of the business of owning slaves--good practice, is all.

When John is found out Waller extracts an appalling penalty. John in the book keeps quiet and carries on the revolution behind Waller's back, setting up 'pit schools' (pits dug in the ground and covered so that the lamplight doesn't leak). John in the film is openly defiant; he tells Sarny "When an arm is cut off the other grows stronger. You're my other arm now." Sarny proves John right; she not only reads better than he does and at an earlier age she takes on Waller too--only she's smarter, able to think on her feet.

In Paulsen's book John and Sarny take their punishments without complaint then secretly carry on the teaching, a quieter safer way to respond to oppression. John and Sarny are retooled to be more active in Burnett's film, and while their solution to problems may sometimes seem unlikely said solutions are often rooted in the fact that being able to read and write means being able to arm themselves with immediately useful skills (deciphering maps, reading road signs, forging day passes), and that literacy in general can be a major tool in the longer game of survival (knowing the slave laws--and someday maybe repealing them).

Burnett gives us the antebellum South in all its glamor, especially during the lavish dinner Waller holds for his older brother and guests, all sweeping candlelit shots and extravagantly plush furniture; when the topic of slavery pops up in conversation the cameras pauses to gaze at a little gesture of cruelty inflicted on Sarny, for dropping a tray of food. John teaches Sarny in the glow of firelight, the student warming her mind under the blaze of her teacher's attention; when Waller uncover evidence of slaves reading (a stolen bible) he conduct his investigation under the merciless noon sun, to better highlight the horrors to come.

Interesting to note that some of my students have already seen the two films; that somehow teachers have gotten wind and are showing them to kids, usually for Black History Month. Ironic to think perennially cashstrapped Burnett was thusly bankrolled, and was granted the biggest exposure of his career thanks to Disney.

I mentioned how Sheyann's wide-open eyes gave her story freshness and urgency; telling Nightjohn through Sarny's eyes gives hers the feel of a fairy tale, lends it a ravishing sheen that somehow enhances the drama (remember a man's fierce old face as he recites his alphabet, just before he reveals the heavy price he paid for learning). Burnett takes two important passages in African-American history (slavery, the civil rights movement) and tells them in his own quietly humane and graceful manner--all on a TV movie budget, under the banner of the world's largest entertainment corporation. That in my book counts as a genuine miracle. 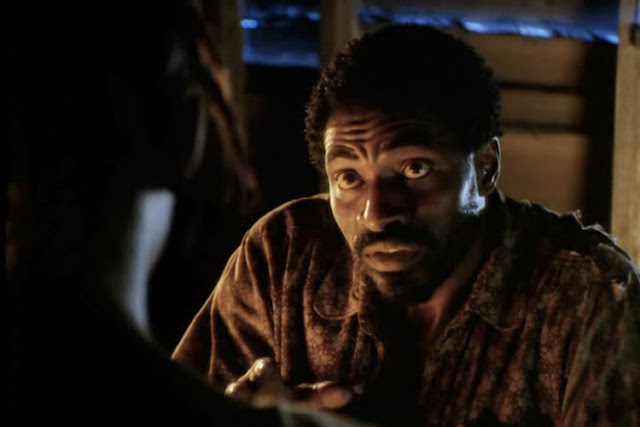 This is a tremendous piece Noel. Few have accounted for the small but fine and constant narrative glories of these small films, and none so well. Have you seen Burnett's FINDING BUCK MCHENRY (2000)? It also is of the "wholesome family television format", and also becomes, I think, a deeply troubling film. It too tells the story from the point of view of a child, but here it's a white teenager discovering for the first time the racist American past he has inherited. This of course cracks the wholesome facade of the first half of the film, though the facade keeps parading before us, just as what it is: covering immense scars. Then the white teen becomes overzealous (easily the most overzealous child in the history of cinema!) in his desire to try to heal (but heal what remains a scar), getting the media involved, etc. and it becomes a lesson in discretion: something dear to Burnett. Contrary to appearances, it's quite a violent film.

Thanks Andy. No, I've missed that one. I did see his recent TV movie--interesting, I think I should see it again, but on first glance it seems like standard Hallmark fare. I saw My Brother's Wedding, Jacobean drama that prefigures To Sleep with Anger. Saw Jonathan R.'s favorite, When it Rains (and it's lovely). I'd love to do a piece on To Sleep With Anger, someday.