Let the Right One In; The Sky Crawlers 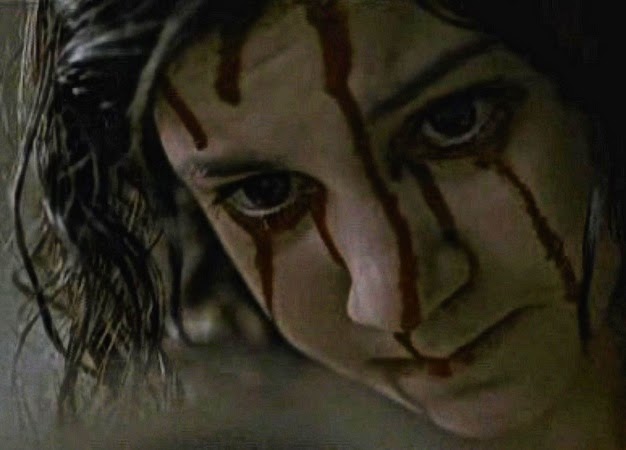 For Halloween, reposting an old article on one of the more original bloodsucker flicks out there; plus one of the better science fiction films this side of the new millenium:

Love is stronger than death

Lat den ratte komma in (Let the Right One In, 2008) is fondly remembered, apparently, less for Tomas Alfredson's bleak storytelling than for the low-key romance that blossoms between two-hundred-year-old vampire Eli (Lina Leandersson) and twelve-year-old youth Oskar (Kare Hedebrant).

I see it a little differently, however; I see the blossoming of a low-key seduction of Oskar. I see Eli eyeballing Oskar as a possible replacement for Hakan (Per Ragnar), her adult companion and facilitator. From what I understand about the source novel, writer John Ajvide Lindqvist makes it clear that Hakan and Oskar are in no way similar, and that Eli has genuine feelings of affection for Oskar. Alfredson chose to cut out Hakan's backstory, making his relationship with Eli more ambiguous, and pointing up the parallels between Hakan and Oskar.

It's telling, how Alfredson views Oskar--basically as a serial killer-in-the-making. Central to Alfredson's take of the character is Oskar's brief scene with a knife and a tree; without a word of explanation, Alfredson makes it clear that this is what Oskar would like to be, this is how Oskar would like to treat his tormentors. Sad fact of life, but victims of bullying sometimes aren't martyred saints, but passive youths forced (by bullies, by authority) to repress their anger and frustration until they find some other outlet for their anger--or, ultimately, explode in a paroxysm of violence. In this case, Oskar finds a tree; in later years in a series of chosen victims, perhaps. I see this happening where I work.

Does Eli love Oskar? I say--why not? One can love someone at the same time one is exploiting him or her. If there's anything I don't believe in, it's a pure, untainted love. At our best we try, as much as possible, as often as possible, to think of what's best for our beloved, and hope this is enough.

Alfredson takes his cue from the cold, bleak weather and landscape; the camera rarely moves (as if frozen in place) and at night the snow seems to have its own faint glow, less fairyland than nightmare, less enchanting than chilling. Not the greatest vampire film ever made (you can see the influence of Abel Ferrara's The Addiction (1995), George Romero's Martin (1977), even of Ingmar Bergman at his most gothic), but easily one of the best recent examples of the genre. 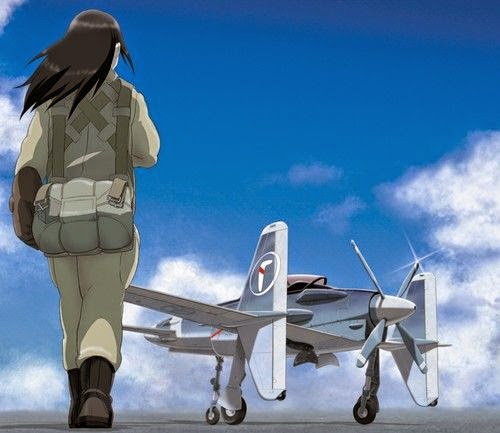 Mamoru Oshii's Sukai kurora (The Sky Crawlers, 2008) is, in a word, breathtaking. Based on the novel by Hiroshi Mori, the film tells the story of a group of pilots engaged in a series of aerial battles, their struggle enveloped in an air of mystery--how this happened we don't know; why, we don't know either; for whom isn't really made clear, other than the fact that they and the pilots flying against them work for opposing companies. This is corporate warfare pushed in extremis but beyond the canny observation (how many of the world's conflicts are inspired, abetted, maintained by corporate interests?) that's not really the film's point; rather, it's the pilots' psychological state, a (as Oshii noted) state of stasis where they don't know how and why they came to be fighting, and don't really care.

I've seen these kind of people before, not in a movie but a novel--or rather, a series of novels; Oshii's film may be the first animated attempt to bring the works of J. G. Ballard to the big screen. All the hallmarks are there: the disaffected characters, the sense of alienation, of dislocation, the occasional surreal imagery against perfectly blue skies (maybe it's Magritte, but when I picture an image surreal, I picture it against flawless blue skies). The pilots don't so much gaze at each other as they do past each other, or past one another's faces at some unknowable, invisible goal; their priorities are all askew--serenity, not survival, some kind of equilibrium achieved by any means possible, seems to be the objective here.

Animationwise, Oshii combines documentarylike digital animation (3-D planes with unusual propeller designs (double propeller and canard wing configurations) with more traditional 2-D animated characters--the solidity of 3-D for the fighter sequences, the expressiveness of 2-D faces for the dramatic exposition (no, Oshii's characters are not known for being expressive, but this makes their minutest gestures all the more important--where a digitally animated human face would seem robotic, a hand-animated human face would seem to be underacting).

But one doesn't go to Oshii for seamless integration of cutting-edge technologies; one goes to him for a certain dry emotional tone, an austere look, a metaphysical sensibility. In this case, the results are what Steven Spielberg's Empire of the Sun (1987) might have been like if the film were told from the pilots' point of view, totally in the spirit of Ballard's novel. An enthralling film.

Lindqvist's novel is a lot more explicit about Hakan's relationship to Eli, so there's little question there regarding Oskar's future role. The book's also a fuller and more sympathetic portrait of the various down-and-out residents of the apartment complex, and in that respect is better than the caricatures in the movie (though the book is marred by an unnecessary plotline that features the undead Hakan terrorizing the populace).

I like what Lindqvist has done with his screenplay though; by stripping away the backstory, he and Alfredson play up, instead, the ambiguous, seductive "romance" between the two.

And you're absolutely right about Martin; I need to see that again.

Sounds about right--novel having more space, it can afford to spend more time on the supporting characters.

And the movie plays to its strength, film being about surfaces (what's he really thinking) and novels being about inner voices (the characters', the author's).

That swimming pool scene has got to be the most memorable and my favorite scene from a 2008 film.

NOt my best of '08 but a lot of fun--emblematic of the film, only more so. The same locked-down camera, the same unearthly diffused light, the same dreamlike pacing, the same chill, in water this time instead of winter air.