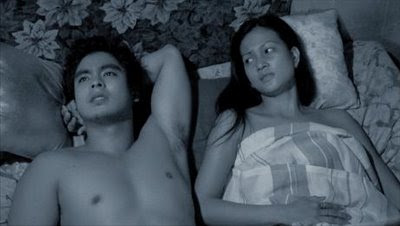 The film also feels inspired by Vittorio de Sica's Sciuscia (Shoeshine, 1946), with the latter's protagonists not unsimilar to Alix's pair of brothers--Jason (Jiro Manio) and Billy (Coco Martin)--struggling to fulfill their unlikely dream (a horse in de Sica's film, a drum set in Alix's), and having their world crumble around them as a consequence; Luis Bunuel's Los Olvidados (1950) with its malevolent older youth who corrupts and eventually destroys his young protégé; and Hector Babenco's Pixote (1981), where a boy is driven to murder.

But Alix's film also has its own virtues--first and foremost the city of Manila, as bewildering and chaotic and claustrophobic a jungle as any megacity on Earth. Alix is careful to exploit the visual possibilities with a digital camera (which while it doesn't have the clarity or color palette of 35 mm--Alix doesn't have the resources to do what Michael Mann did with an HD digicam in Miami Vice (2006)--are not inconsiderable). He's up against a daunting number of previous works that treat the city as a main character--Lino Brocka's Maynila sa Mga Kuko ng Liwanag (Manila in the Claws of Neon, 1975), Ishmael Bernal's Manila By Night (1980), Mario O'Hara's Bagong Hari (The New King, 1986), Jeffrey Jeturian's Pila Balde (Fetch a Pail of Water, 1999), Mendoza's own Tirador.

That Alix doesn't embarrass himself being compared to classics is possibly the highest compliment I can give. Simply by capturing details of the city--the dilapidated lobby of a second-run theater (in Cubao or Quiapo, I'm not quite sure); the cramped alleyway of a squatter community; the teeming afternoon traffic--Alix renders a portrait all too familiar yet somehow still fascinating (like a matured beauty, Manila still has its handsome side, its compulsively photographable (and I don't mean touristy) side).

He complements this portrait with a fractured narrative (screenplay by newcomer Regina Tayag)--like Robert Bresson, he refuses to have his various narrative threads explicitly laid out for the audience; instead we pick them up in media res and follow them through as best we can. Chronological order's no guide either--Alix has mixed things up, coming back to certain scenes again and again (a man watching another enter a movie-theater bathroom; three men pulling a wooden plank in from across a second-story window), and our comprehension only comes slowly, painfully, like in an intravenous drip.

Sometimes too painfully. At one point Billy learns that his girlfriend is pregnant; they share a sullen moment together--you know what they're planning to do--and suddenly, we see Billy bent over a toilet, vomiting. Why? One can guess, but the narrative jump made is too distracting; at the very least Alix could throw in a few connective scenes later on, to fill the gaps.

While we're complaining, Alix might look into improving his fight sequences--some moments of violence--or even of sex (both need careful choreography) don't look as if the doer is really connecting with the doee, if you know what I mean. Little details, but sometimes God (or the Devil) is in the details; you're redeemed or damned accordingly.

Alix adorns his shuffled story with a Christmas tree's worth of lovely performances, from Anita Linda as an old woman perpetually berating her male companion ("all she needs is to get laid," a neighbor whispers) to Rick Davao as the hollowly cheerful father of Billy and Jason, to Sid Lucero (actor Mark Gil's son) as Pablo, the two boys' good friend, who stays with them for a time because he'd been thrown out by his previous landlord for sleeping with the landlord's wife.

Alix has spiced up his picture with sex, a small fistful of scenes, and there's a special frisson from watching men and women who look less than glamorous (in other words, less silicone-implanted than Hollywood) get it on with gusto. Aside from the abovementioned problem of connection, it's about time we saw franker and less inhibited sex on the adult Filipino screen.

Best of all he's pulled his diverse mixture together with a soundtrack composed and performed by the unbelievably proficient independent Filipino filmmaker Khavn de la Cruz (at the tender age of 35 the creator of sixteen features and over sixty shorts (and I don't mean pants)). I've only seen an extremely limited sample of Khavn's prodigious output, but whatever his talents as filmmaker he's impressed me more as a musician: his score for John Torres' Todo Todo Teros (2006) and for Tambolista are urgent, eclectic, crude; the latter's occasionally riffing drumbeat (presumably Jason jamming on a borrowed set) literally function as the film's (and city's) heartbeat, setting its pace and tone and level of excitement. Along with a royal flush of recent Filipino digital filmmakers (John Torres (Todo Todo Teros; Taon noong ako'y anak sa labas (Years When I Was a Child Outside (2008)); Raya Martin (Indio Nacional (2006)); Dennis Marasigan (Sa North Diversion Road (On North Diversion Road, 2005)); Auraeus Solito (Ang Padadalaga ni Maximo Oliveros (The Blossoming of Maximo Oliveros (2005)); and Sigfried Sanchez (Anak ni Brocka (Son of Brocka, 2005))), Alix is a welcome new voice in an exciting new field--the most vital in the country, arguably.

Tambolista is the first film I saw which featured the very talented Sid Lucero. It's a shame I didn't get to watch him in Selda. Damn, I hope they release a DVD soon!

Sid was also good in Dennis Marasigan's Tukso. He's got his father's looks and, apparently, fearlessness and talent.

Drat, haven't seen that either. Would you know if they released a DVD of Tukso?