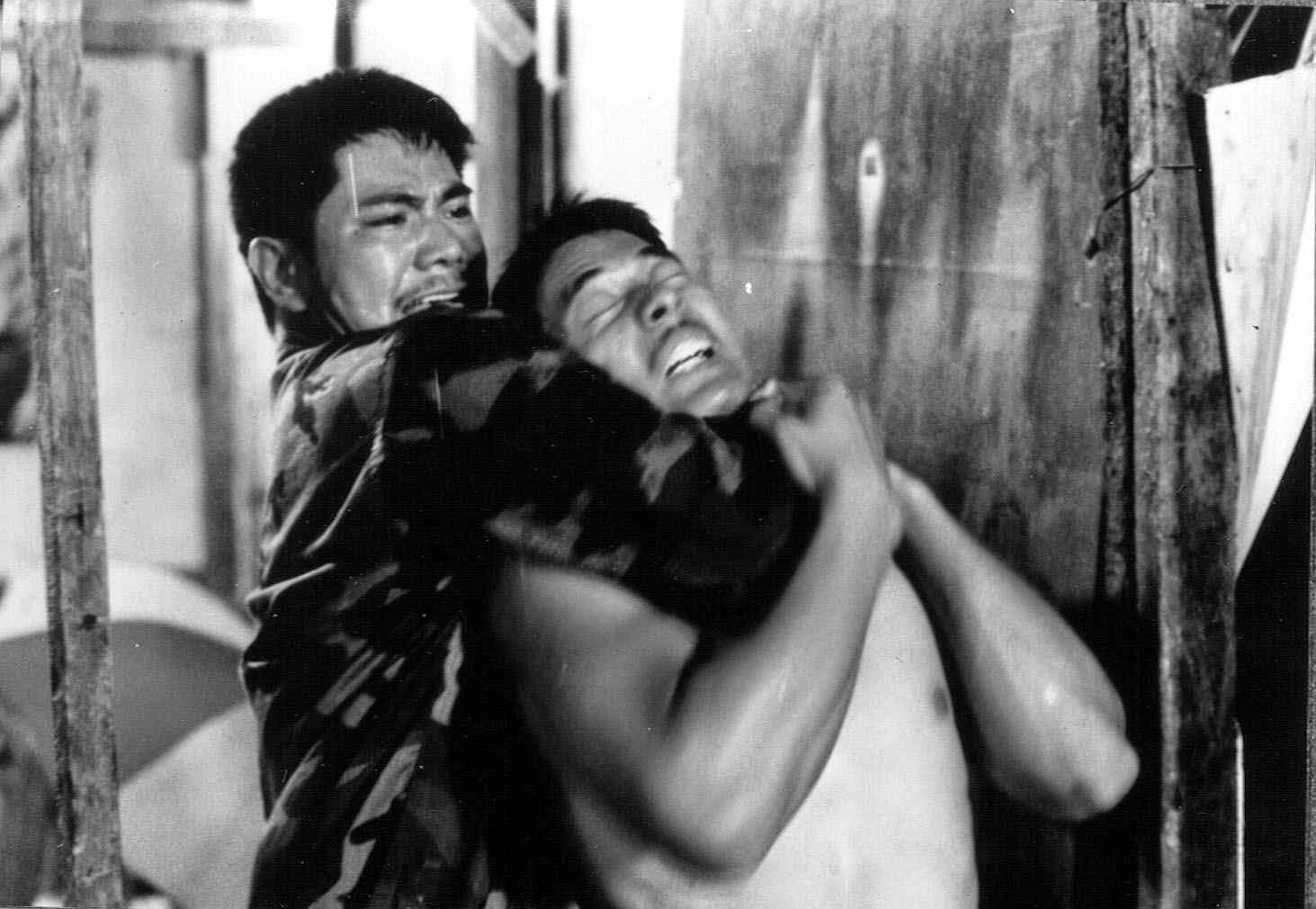 (My contribution to Goatdog's Movies About Movies Blogathon, this article was first published in Cinemaya Magazine, Issue # 43, Spring, 1999)

A farewell to the Filipino film industry

Raymond Lee, a friend of mine, e-mailed news of the Good Harvest film festival to Jacob Wong, director of the Hongkong International Film Festival. The Good Harvest festival, staged by Mrs. Lily Monteverde, was a one-of-a-kind offer: any filmmaker, veteran or new, can propose a film project on any subject. The catch--you only had a 2.5 million peso budget (roughly US$62,500), and ten shooting days. Jacob’s comment: “it will take a filmmaker with more than talent to make anything even passable out of 2.5 million pesos.” After watching Babae Sa Bubungang Lata, Raymond went straight home and typed on his desktop: “funny you mentioned ‘a filmmaker with more than talent…’”

Babae Sa Bubungang Lata (Woman On A Tin Roof, 1998) isn’t about films so much as it is about the people who make them. Not the film directors or producers or stars (as in Frederico Fellini’s 8 1/2 or Francois Truffaut’s Day For Night), but the little people on the marginal fringe. It’s based on a play written by Agapito Joaquin back in the 70’s, a little chamber drama about an actor Maldo (Mike Magat) and his faithless wife, Toying (Aya Medel). O’Hara, in adapting the play to screen, has updated all the cinematic references, and changed the actor to a stuntman. He added Amapola, an aging actress (Anita Linda); Nitoy, a billboard painter (Frank Rivera); his stuntman lover, Eric (Renzo Ruiz) and all kinds of subsidiary characters and their stories. The result looks less like a chamber play and more like Ishmael Bernal’s Manila By Night, like Robert Altman’s Nashville, or Short Cuts: people and their stories weave in and out of each other’s lives, crossing, opposing, loving each other.

O’Hara plays the game of the many-peopled, multiple-story film with consummate skill; even more remarkable is the way he orchestrates each story to provide a different emotional color to his tapestry. Nitoy the billboard painter is quietly and hopelessly in love with Eric; he’s also a film fan, and in him O’Hara incarnates the lover of Filipino films--ever loyal, ever abused, ever martyred and nostalgic and ignored. Amapola the aging actress embodies Filipino cinema’s glamorous past; Maldo the stuntman and his wife Toying represent the industry’s present, with its endless scrabbling for jobs and money and food.

There are sharp comic scenes, like Maldo “auditioning” with his director in the privacy of the director’s van; sad scenes, like Amapola playing “Hindi Kita Malimot” (I Can’t Forget You) on the piano. There are scenes of sudden cruelty, as when Eric violently beats Nitoy; scenes of surpassing tenderness, as when Amapola’s son finally meets her after fifteen years.

It’s all done with deceptive ease; the film, as it progresses in its meandering but never less-than-fascinating way, accumulates power. O’Hara is a master of the understated drama, the narrating of daily life in a manner absolutely true to daily life. He does on screen what Hemingway was always trying to do on paper: keep the flame of his prose, like the flame of an alcohol burner, low, low, almost to the point of winking out, until it explodes.

O’Hara works in the neorealist tradition of Vittorio De Sica and Roberto Rossellini (a tradition Lino Brocka belonged to), but there’s also a touch of the baroque, of the gothic in him. He stages much of the drama inside the Manila North Cemetery, a vast landscape of tombs and crosses and silent, weeping angels, where most of his characters--so poor they can’t afford a house--live. Against monuments of famous Filipino presidents and statesmen we watch these people eke out a living; amidst edifices of stone and black marble we watch them struggle to survive. It’s a marvelous conceit, a brilliant coup de theatre.

There are endless other details to marvel at or admire: the way the melody of “Hindi Kita Malimot” is played again and again, with various instruments and with an almost infinite variety of feelings (recalling Altman’s deft, satiric use of a movie’s theme in The Long Goodbye). The way the painter’s relationship with his lover puts to shame every recent Filipino film depicting homosexuality, male or female--how the couple is shown with a refreshing lack of pleading or self-righteousness, how their drama is seamlessly integrated into the story’s fabric.

There are flaws (you can’t expect perfection in a US$60,000 production)--a few scenes out-of-focus, a certain amount of narrative confusion--but they are almost laughably unimportant. The clumsiness actually becomes part of the movie’s texture, its visual style--as if this sad, desperate picture were made by the same sad, desperate people the picture is about.

I talk of Altman, Bernal, Brocka, De Sica, Fellini, Hemingway, Rosellini, Truffaut--great artists all--but I do O’Hara a disservice; the picture stands perfectly well on its own. You feel, watching the film, that he has the unique ability to assume a Godlike view of his characters--apprehending them in their painfully frail, all-too-human entirety--and at the same time be down on earth next to them, taking their side, rooting for them, loving them intensely. It’s the source of greatness of all his very best works, from Bulaklak Sa City Jail (Flowers Of The City Jail) to Tatlong Taong Walang Diyos (Three Years Without God) to this film.

Made in about ten shooting days and for a fifth of the budget of an ordinary film, Babae Sa Bubungang Lata is an eloquent repudiation of every film that has ever cost over 10 million pesos (the normal budget for a Filipino production), with all their waste and bloat and arty pretentiousness. At the same time, it’s a sad farewell to the business O’Hara has worked and struggled in for over twenty years. “The industry is dying,” he seems to be telling us, a message we’ve heard before; but the rich ambivalence in his voice, the dark, deeply felt tones of anger and affection and regret make the message almost unbearably moving. You almost feel that the industry doesn’t deserve a tribute as lovely as this picture. It’s possibly the best Filipino film made in the past twelve years.
at 5:44 PM

The blurred shots are courtesy of the defective lenses of Regal at that time and they "damaged" many-a-film in Good Harvest. I immediately noticed this during the Good Harvest film fest at SM and made sure to steer clear of those lenses when it was my turn to direct a feature. BABAE is a really depressing film, man. Sad to say much of the stuff in it is probably based on fact. Painful to watch the stuntman guy character being pummeled by his supposed mentor-- the sadistic main "fight director." And another truly disturbing ending to add to the collection of shocking climaxes of direk Mario. Not for the squeamish...

"The industry is dying" -- Kind of same theme, perceived from the top of the ladder of course and from a very different malady runs through Blake Edwards "S.O.B.", which I just revisited for the blogathon. Neorealism has never been my favorite style, but I'm still sorry I can't see this (at least until I get an all-regions DVD player, I'm guessing).

BTW, I finally saw "Manilla by Night"...pretty interesting, but I'm hoping there's a much, much better print out there, somewhere in the world than what I saw via Netflix. Also, evidently they were playing pretty much the same music in Manilla in 1979 as they were in L.A. The Global Village was already in full swing.

I wish they had a better DVD available too. The actual print is in good shape--colors nice and sharp, few blemishes.

Mad Doctor is fun, but for real De Leon, I recomend Terror is a Man and the two vampire films I write about in my blog somewhere. Check em out, one of these days.

Since you are definitely the Man on these matters, my Netflix queue has been altered accordingly.

I'll be seeing "Terror is a Man" first. Besides, I even liked the Michael York/James Mason "Island of Dr. Moreau." (I missed the Marlon Brando/Val Kilmer/John Frankenheimer one, though. From what I've heard, it's almost a sure thing this one is better.)

Lemme throw in Women in Cages and Walls of Hell (that's a war picture, not an occult epic horror). Too bad De Leon is best represented by these pulp B movies. They're quite good, but they're not his greatest.