The Many Faces of Jose Rizal

When I wrote this I'd already seen most of the Rizal films that had come out (all except for Mike de Leon's Bayaning Third World (Third World Hero, 2000)), and put everything in the following perspective:

The Many Faces of Jose Rizal

The Philippines has long been obsessed with Jose Rizal--writer, poet, artist, intellectual, doctor, educator, martyr. Two of the earliest silent feature films made in the Philippines dealt with Rizal--La vida de Jose Rizal (The Life of Jose Rizal) and El fusiliamento de Dr. Jose Rizal (The Execution of Dr. Jose Rizal)--and Ramon Estella made a three-hour version in 1956: Buhay at Pag-ibig ni Dr. Jose Rizal (Life and Loves of Dr. Jose Rizal). Rizal's two novels, Noli Me Tangere and El Filibusterismo were adapted twice: the first time in 1915 and 1916 respectively by Edward Gross, the second time in 1961 and 1962 respectively by Gerardo De Leon, arguably Philippine cinema's greatest filmmaker. De Leon also directed Sisa (1951) a variation on Noli Me Tangere, which takes the story of one minor character in the novel and expands it to feature-film length (at the time it must have seemed like a dress rehearsal for De Leon's full-on adaptations; nowadays it seems to anticipate Stoppard's play Rosencrantz and Guildenstern are Dead by seven years). Lino Brocka did his modern-day version of Noli with Tinimbang Ka Ngunit Kulang (You Were Judged and Found Wanting) in 1974.

Rizal seems to inspire both audiences (the two silents and Tinimbang were boxoffice hits), and filmmakers (El Fili has been described as De Leon's gothic masterpiece, while I consider Tinimbang to be one of Brocka's best-ever films). Now, with 1996 being the centennial of Rizal's death, and 1998 being the centennial of the country's independence from Spanish rule--an independence to which Rizal contributed no small part--the local film industry has made not one, not two, but three Rizal films, with one more in post-production at the time of this writing.

The first--Tikoy Aguiluz's Rizal Sa Dapitan (Rizal in Dapitan)-- has already been discussed in this magazine. The second-- Marilou Diaz Abaya's Jose Rizal--opened December last year, to widespread acclaim and huge commercial success. Why not? It's about Rizal, and at P120 million (US$3,000,000), it's the most expensive Filipino film ever made.

Jose Rizal is a vast exercise in logistics--hundreds of extras, dozens of locations, Steadicam rental for over six months. Diaz-Abaya's most impressive achievement is in marshaling all the elements together into a comprehensive view of Rizal's life--his university days; his exile in Europe; his writing the two novels; his arrest, trial, and ultimate execution by firing squad.

If there's a flaw in Rizal, it's not in the technicals--photography, costume, and production design are as perfect as three million dollars can make them--but in its utter conventionality. There are speculations that events in Rizal's life inspired his novels (not exactly fresh insight), and one scene has a character from his novels urging him to support the revolt against the Spaniards--Hollywood epic filmmaking at its most tasteful, in the grandly thudding tradition of Richard Attenborough's Gandhi, or David Lean's Doctor Zhivago.

Doesn't help matters that Cesar Montano is miscast as Jose Rizal. Diaz-Abaya must have had Montano's action-star persona in mind when she chose him, as a way of emphasizing Rizal's vanity; but after a few witty and regrettably short scenes, nothing much is made of Rizal's egotism--all we're left with is an action star trying to act the intellectual. Better is Jaime Fabregas as defense lawyer Luis Taviel; in his soft-spoken way Fabregas gives a subtler performance than Montano. His defense summation--understated yet intense, spoken in fluent, effortless Spanish--upstages Montano's own climactic trial speech. 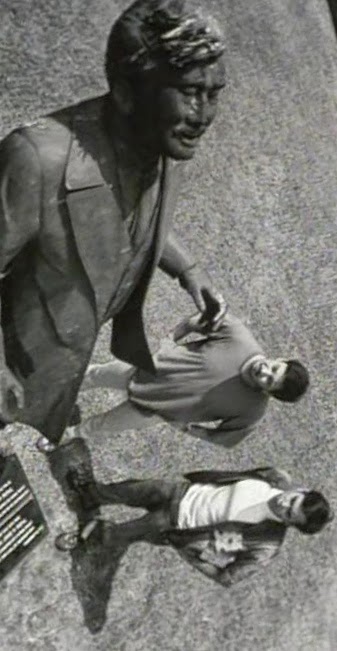 Mario O'Hara's remake of Gerry De Leon's Sisa couldn't be a more different film: where Diaz-Abaya took six months and three million dollars to shoot, O'Hara did his in ten days, for about sixty thousand dollars.

There's much to dislike about Sisa: the sets are basically of the plywood-and-Styrofoam school of production design; the acting--sex star Gardo Verzosa plays Rizal, sex starlet Aya Medel the title role--is crude, if not a bit embarrassing. The story is difficult to follow, shifting from past to present to fantasy to supernatural reality, with little preamble and no apologies whatsoever.

Yet there's something about Sisa that's difficult to dismiss. As all Filipinos know, she's is the madwoman who haunts the margins of Rizal's Noli; dressed in filthy rags, calling out the names of her two lost children, she's easily the single most memorable character in the novel. O'Hara believes that memorable characters aren't created so much as they are based on people the writer knew in real life (Rizal once spoke of a "Miss L., who has the most enchanting eyes"). It's O'Hara conceit (and the crucial difference between his film and Gerry De Leon's) that this "Miss L." was the basis for Rizal's Sisa, and that she was the great love of his life.

In a sense O'Hara has been telling Sisa's story all his life. He not only wrote the screenplay for Tinimbang Ka Ngunit Kulang (Brocka's version of Noli) he also played Berto the Leper, lover of the Sisa figure in the film. O'Hara may have revealed more of his feelings than he intended in Tinimbang, both in the screenplay and in his acting; his Berto (like his screenplay) is compassionate, infinitely loving and infinitely tender towards the helpless, insane Kuala. From writing a great screenplay for Brocka (and giving, incidentally, a great performance) to writing a great screenplay for his own film must have been an inevitable, all-too-tempting step.

I've never really liked Rizal as a dramatic character; he's always been too passive, too intellectual a hero for me to believe in. Except for his execution he lived a meandering, uneventful life--hardly ideal stuff for film biographies. I've never really understood what drove him to write his novels, or believe what he believed. His family was maltreated, yes, and he saw Spanish injustice firsthand...but that was years ago, when he was a child. Could there have been someone closer to him--some woman, perhaps--whose tragedy drove him to what he did?

This is Sisa's greatest audacity--to explain Rizal in such a way that he comes to vivid life before us; everything O'Hara does complements and reinforces this ambition. He knew he couldn't create the world of 1896 on a two-and-a-half million budget, so he deliberately creates an unrealistic one, out of plywood and Styrofoam. He knew he couldn't get topnotch actors to play his Rizal and Sisa, so he reconceived them as a pair of crudely intense, emotionally passionate lovers (Verzosa and Medel for all their 'crudity' are ultimately affecting). O'Hara has reimagined Rizal's life the way Marc Norman and Tom Stoppard reimagined Shakespeare's in John Madden's Shakespeare in Love--as a grand, once-in-a-lifetime love affair. If you don't buy it, you find yourself hooting helplessly in laughter; if you do buy it, you find yourself believing in Rizal for the first time, as a fully human being.

Rizal sa Dapitan was the first, Jose Rizal the biggest; coming soon is Mike De Leon's Bayaning Third World (Third World Hero), invited to this year's Cannes (a few thoughts on that particular Rizal film). Sisa will probably fall between the cracks opened up by these three works. It's a film too ambitious for its own good, a project that fails (though fails magnificently) to live up to the promise of its wildly innovative screenplay. It may end up forgotten in the flood of Rizal films, relegated to the more obscure dustbins of film history...except by those who can respond to its magic, or thrill to its unfettered imagination. 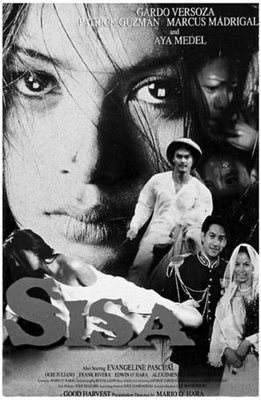