What made her such a memorable actress? Her smile, which was unique; it had a queer twist to one side as if wanting to turn into a sneer, something worthy of Barbara Stanwyck in a noir thriller. It didn’t, not quite; it accompanied eyes that opened wide in surprise and wonder, or narrowed into an intense laser stare. The problem with those eyes--or the glory of them whichever way you saw it--was the twinkle you saw, a twinkle that said she was only kidding, that the near-sneer was a put-on, that the tough-girl image was merely a façade defending her from a tough world.

That twinkle--so impish, so full of mischief--set the tone for most of Blanca’s performances, I think. It let you in on the joke, made you accomplice and witness to her secret world of feisty tomboys, comely Visayan lasses, light-footed comediennes. You aren't gazing at her from below; you're up on the big screen dancing with her, laughing with her, exchanging wisecracks that made the world--and you both--fall in love.

Even towards the end she made you laugh--in Tikoy Aguiluz’s Biyaheng Langit (Paradise Express, 2000) she was Joyce Jimenez’s grandmother, and scolded for her gambling addiction. Blanca’s reply: “please understand, this is the only pleasure left to me since my husband died. Anyway, life itself is gamble; who am I to deny otherwise?” Aguiluz himself takes a chance casting Blanca, known for her wholesome image, in an erotic thriller. The gamble pays off--even as grandmother Blanca’s twinkle come into play; this is a grandma capable of fun, of mischief, a grandmother perfectly capable despite her gentleness of getting her granddaughter into trouble.

But if her comedies made us laugh and love, her dramas also moved us. In Lino Brocka’s Miguelito the Boy Rebel she was mother to rebellious Aga Muhlach as the eponymous youth. The film is Muhlach’s: he spends the most time onscreen, he's the story's focus, he's required to react to the news that he's the bastard son of his father’s mistress. Not a successful performance, I think; Muhlach flails all over when he means to be intense, acts remote when he means to look vulnerable. He was too raw, too unrefined at the time (despite all of Brocka’s skill with performers) to capture the insecurity gnawing away at an upperclass adolescent who learns that he isn’t after all.

But Blanca was perfect as the woman shoved aside to avoid scandal, who meekly accepts her subsequent role as non-entity in the life of her son, for the sake of her son's promising future.

In any lesser drama Blanca would have brought down the roof with a display of tears and hysterical screaming; instead she goes on preparing dinner, the trembling in voice and hands the only sign of agitation. She’s kept her feelings to herself for years, her calm seems to tell us; why crack now?

In Jeffrey Jeturian and Amando Lao’s Sana Pag-Ibig Na (If Only This Were Love, 1998), Blanca plays Gerald Madrid’s mother, a happy, contented creature until her husband dies, and she learns he had a mistress.

The focus is again elsewhere, on Gerald Madrid as a young boy who befriends his dead father’s mistress. It’s a tiny drama, small-scale and careful, lifted above the level of run-of-the-mill television by Lao’s cleverly structured plot and gift for characterization and--again-- by Nida Blanca.

Blanca act as if she’s never seen a movie where the wife learns of her husband’s infidelity: her anger here is fresh and raw. More, Blanca (and Jeturian in casting her) seems to bring not just the anger of a wife and mother betrayed but also of movie star Nida Blanca being betrayed--the beloved Waray girl, the feisty, tomboyish galwagaw (wacko), the mischievous fleetfooted comedienne who danced into everyone’s hearts long ago--and continues to do so today. She does the betraying; she breaks the hearts. What made him do this to her? What made him choose a younger woman? Can’t he see how young his wife is inside--how beautiful still? How can he be so blind?

Blanca’s anger ultimately suggests a woman’s anger at the process that carves one’s face and spots one’s hands and aches one’s back so that the body bends that much closer to the ground--to the grave itself. Blanca doesn’t just rage at her husband’s betrayal; she rages at the wounding progress of time, and at a world that refuses to recognize her true age and worth and indomitable spirit. I can relate to that. 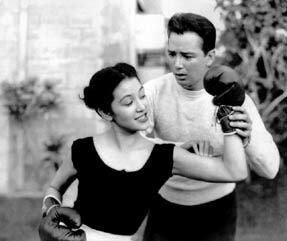 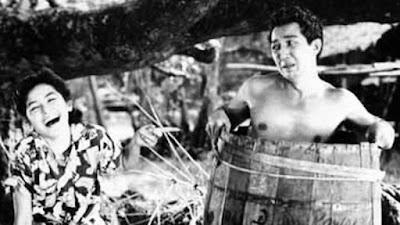