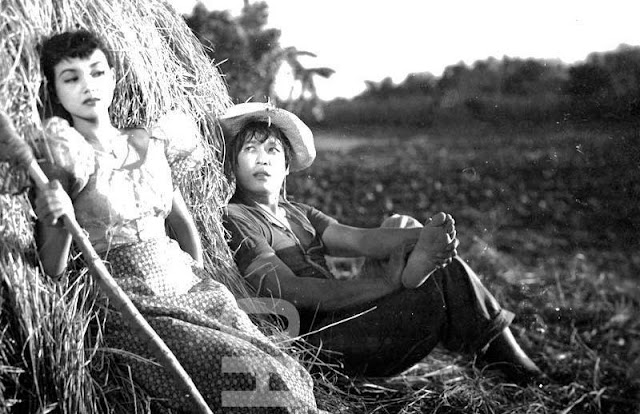 De Leon is one of the few great filmmakers who dabbled in comics (others include--off the top of my head--Robert Altman, Mario Bava, Lino Brocka, Celso Ad. Castillo (who did a remake starring Ramon Zamora in 1973), Ishmael Bernal, Lamberto Avellana). The previous year de Leon had also adapted Mars Ravelo's Dyesebel, and while I generally agree with Martin Scorsese's jab at the Marvel Cinematic Universe I do think some comic-book adaptations are cinema--you just have to decide which.

De Leon doing comedy can be jarring to watch; he's better known for dramas (crime, period, melo) that move at a stately sometimes turgid pace, the feeling of monumental progress emphasized by angled shots--the camera positioned so one figure looms in one corner of the screen while the other is dwarfed at the opposite end; the lenses poised a foot or more below the eyeline so everyone is granted larger-than-life stature. Comedy has this tendency to cut large characters down to size, so you wonder how de Leon would handle the potentially contrary genre.

Surprisingly well, as it turns out. Early scenes between Pedro (Efren Reyes) and the hunchbacked Terio (Lopito) have the loose-limbed feel of improvised dialogue; Tito Arevalo's jaunty music helps establish a lighthearted tone.

Reyes gives his Pedro the languid movements of a water buffalo; he looks like someone who can sprint when motivated (as by a collection of suman--glutinous rice cakes--hanging from an arm) but generally can't be bothered to do anything, much less bathe. "Aren't you embarrassed to be around women?" his disapproving mother asks. "What if they say your armpits are fit for planting taro?"

Women are drawn close despite Pedro's sketchy personal hygiene--take Amparo (the fragile Edna Luna), a housemaid who admires Pedro but is shy to flirt with him because 1) she's just not that kind of girl, and 2) she has a pronounced limp. Pedro doesn't know she exists because he only has eyes for Amparo's employer-mistress Marina (Nina Morales), daughter of Kapitan (Captain) Julian (Ramon D'Salva); Marina is a bit of a shrew, but her tone softens around Pedro, who she likes despite (Because?) of his body odor. Upperclass Tony (Lito Anzures) hovers about Marina, tormenting the hapless Pedro every chance he gets.

Rounding out the daisy chain of longing is Terio, who's in love with Amparo; as he reasons out, his crooked back wouldn't turn off women so much if the woman herself had some kind of disability (hence his preference).

Terio loves Amparo loves Pedro loves Marina; for a comedy (Because it's a comedy?) the cast is full of dissatisfied characters. Marina at first glance seems the most open-minded; she invites Pedro to her dinners and dance parties. But she also insists on her status as upperclass diva, sometimes throwing shade at Amparo's longing for Pedro; later we learn that her family (as with all rich families) hides a grievous sin.

Amparo is all vague unfulfilled yearning; when she and Pedro lean against a haystack they exchange confessions, and she admits to loving someone without expecting her feelings to be reciprocated. "What kind of love is that?!" Pedro asks. "You can't explain love," Amparo insists. "Love is love." She shyly asks what he thinks of her, and Pedro is unthinkingly direct: "I don't have to worry around you. I don't have to lie. Or dress up. Or even bathe. We've known each other since we were kids, do we have to pretend otherwise?" With those brief lines Pedro nearly justifies his sourscented self, that cleanliness is a silly affectation and sign of insincerity and we shouldn't hold ourselves hostage to social convention. A clever argument, if unsavory in actual practice; I'm almost seduced.

Amparo isn't; she hints that Pedro takes too much for granted. Pedro asks what she means, gets no answer. In the film's single most beautiful shot Amparo's slim figure walks into the sunset with Pedro gazing thoughtfully after her, a lovely visual grace note (accompanied by some of the tenderest passages of Arevalo's score) to close a lovely scene.

It's in these moments and not in the low comedy or the action or the (obviously dubbed) singing that I think the film's true charm resides. Attractive performers lounge in hay or whisper in the kitchen, risking their dignity to offer the objects of their desire a clue--can't imagine higher stakes to play (Darling it's me, can't you see that?!).

Even better than Amparo circling the oblivious Pedro is Terio trying to prevaricate his way around Amparo--when Amparo confides to Terio that she wishes she could dance Terio tartly responds: "Don't talk to me. Someday your limp might heal; when will my back straighten out?" Later he tells Amparo "Don't waste tears on someone who doesn't even know you exist. Lots of men are in love with you." When Amparo presses him Terio does the unexpected and lays down his cards--in my book the single most courageous gesture in the film. Amparo looks at him with lustrous Edna Luna eyes (the kind that can drive the unguarded to lunacy) and I recognize that expression, the same look of shock and smothered disgust the formerly blind girl gives the Tramp at the end of City Lights. "Too bad Terio," Amparo murmurs, "If only your feelings came out of Pedro's heart..." and (again) walks away. Even in folk tales, where the impossible is often made possible, some things when all is said and done are still not possible; the comic relief no matter how funny or goodhearted will not get the girl, not when the reasonably handsome man is star.

About an hour in the main plot kicks into gear: enter Tulisan Tirong (Ruben Rustia), a shadow out of Kapitan Julian's past. Where before the film gently needled the brittle structure of Philippine society now the blade is unsheathed; a man is shot, a maiden kidnapped, and now Pedro must climb atop his trusty water buffalo, don an anting-anting--a magical bulletproof vest his grandfather gifted to him--and ride to the rescue. The remaining fifty minutes of film isn't unnecessary--it's an escalation of tensions that have been simmering for the first half--but is more familiar de Leon fare, if you've seen 48 Oras (48 Hours) or Sawa sa Lumang Simboryo (The Python in the Old Dome) or The Moises Padilla Story--somewhat leftist politics played out as action drama.

(Is Tirong in love with Amparo? He already has a mistress in Loretta (Purita Alma)--call her a comrade with benefits--but his fixation on Edna Luna's character is inexplicable, and not a little unsettling)

Ride in the cavalry--to rescue or repress? Tirong is a surprisingly sympathetic villain, the constabulary as led by the highborn Tony surprisingly villainous. Tirong might have stepped out of the pages of Jose Rizal's Noli Me Tangere, an Elias lookalike bent on righting long-suffered wrongs; Pedro doesn't oppose Tirong so much as address his own wrongs--basically the injustice he had done to Amparo--while regarding Tirong at a wary distance.

De Leon manages to flex his muscular visual style mainly in the encounter with the crocodile (which swells up into a dragon in the Celso remake), and in a knife fight between Tirong and Pedro. The former is a deft merging of two disparate elements--footage of a roaring crocodile interleaved with footage of Efren Reyes straining against a length of rope, to merge in a few brief but dangerous seconds of someone (likely not Reyes) passing a noose over a clearly pissed-off dinosaur head (the encounter will be restaged to spectacular effect in de Leon's adaptation of Noli Me Tangere). The latter is more interesting, a series of strikingly composed shots of two men heaving against each other, the dagger between them the contested symbol of one man's passage from this world to the next.

The most startling moment in the film involves Pedro staring down the barrel of a rifle and tearing open his grandfather's bulletproof vest to face certain death--startling because we've always known Pedro to depend on amulets and magic. De Leon cuts between Reyes' naked chest and Tony's growing dismay; the two pause, apparently undecided as to how the confrontation should go. Tony however holds a gun and--despite the question raised over his virility and honor (virtues de Leon often equate with one another)--raises his weapon to fire.

With this confrontation between implacable self-identity and homophobic panic De Leon seems to flout every convention of fantasy and folklore plus the entirety of the Penduko mythos (in the character's first-ever film adaptation!), stripping away supernatural elements as if to say: "We don't need silly trinkets to tell an interesting story; good writing, good acting, good filmmaking is all." He might be right, at that.

Thanks to Jojo de Vera for invaluable information, materials, and support 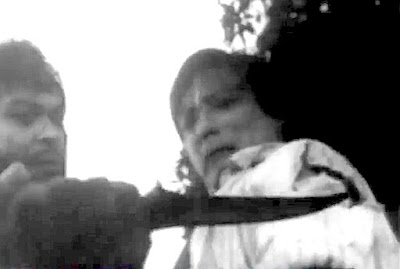 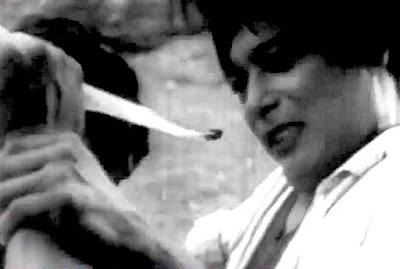 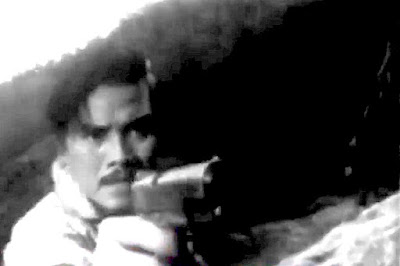 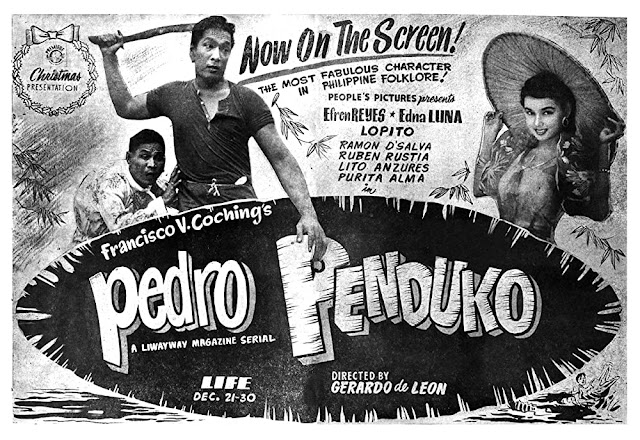