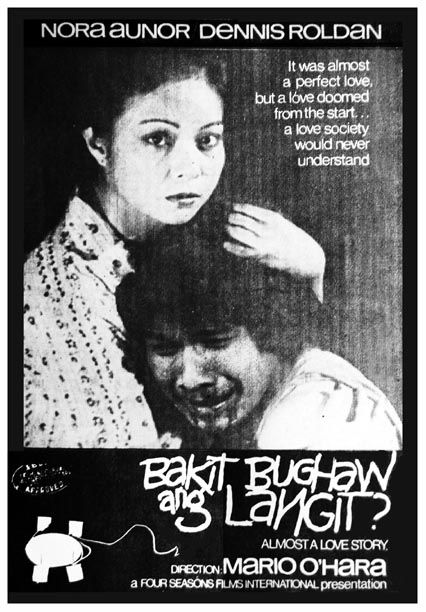 The court of public opinion

Mario O'Hara's Bakit Bughaw ang Langit? (Why is the Sky Blue? 1981) opens by way of introduction with panoramic views of Manila. We see Babette Gomez (Nora Aunor) and her family arrive at an apartment complex; movers unload the truckload of furniture carry it into their newly rented apartment. O'Hara's camera watches as the family settles in, and we come to know each member--imperious Sofia (Anita Linda) loudly presiding over the entire operation; sullen Nardo (Mario Escudero) carrying out his wife's orders; beautiful Lorie who barks like her mother, but at a lesser volume; quiet Babette--their other daughter--skittering about doing much of the heavy lifting along with the movers.

We meet the neighbors: Marta (Melly Mallari), owner of the "sari-sari" (grocery) store at the complex entrance; Cora (Alicia Alonzo) and her unemployed husband Domeng (Rene Hawkins); Luring (Metring David) with a sideline business selling clothes, and her son Bobby (Dennis Roldan). Only courtly old Mang Jesus (Carpi Asturias) seems to notice Babette's plight; they talk about the tiny cacti she's raising, and she notes (without any trace of irony) that they flourish on very little care and water. Later, Luring offers Sofia some clothes, and her life's story--she's raising Bobby on her own, she needs to watch him all the time because he can't care for or defend himself (he's a young adult with the mind of a child) and she can't go out to earn a living. Sofia has a proposal: instead of paying for the clothes, maybe Babette can visit and feed Bobby while Luring is gone.

And so Babette finds herself with a plate of food at Luring's door looking in (you think of girls in fairy tales peering into a deep dark den, wondering at the silence). She finds Bobby upstairs, chained, sets the food before him; he sits hunched over the plate, eating with his fingers. Later, Babette asks Bobby for his basketball--to clean it, she explains; Bobby hands it over after some hesitation. For the first time in the film O'Hara cuts to a closeup--of Babette's face then of Bobby's (before this the picture is all long and medium shots). They have somehow connected.

I sketched the film's first third to give an idea of how patiently O'Hara develops his premise, building on detail after detail, using a self-effacing near-invisible style until before you know it an entire microcosm sits before you, the desires needs ambitions failures of its inhabitants glittering like so many constellations. This is Filipino drama at its most understated, where the yells shrieks chatter fade into the background and the bond forming between shy Babette and childlike Bobby takes center stage with minimum fuss. You could easily imagine the story included in Dekalog, Krzysztof Kieslowski's ten-part housing development drama, only the characters speak Tagalog and the script (by Lydia Collantes Villegas and O'Hara) doesn't resort to the ironic twists or metaphysical in-jokes of Kieslowski's masterwork--it's life taken straight, no chaser.

Bakit Bughaw doesn't have the overwhelming immediacy the stench of street gutters found in perhaps the greatest Filipino film on urban realism, Lino Brocka's Maynila sa Mga Kuko ng Liwanag (Manila in the Claws of Neon, 1975), but it does have a look consistent with its theme and sensibility. Almost the entire film takes place inside the apartment complex, rows of buildings round a central courtyard; O'Hara makes you feel the massive scale of the buildings, the way they dwarf and dominate their inhabitants. With Jose Batac, Jr. (who did Brocka's classic Tinimbang Ka Ngunit Kulang (You Were Weighed and Found Wanting, 1974) as cinematographer, O'Hara achieves a kind of visual bleakness, an unspectacular glow that seeps not so much from sunlight but from naked fluorescent tubes or brutal arc lamps. O'Hara uses this light against barred windows and concrete walls, giving you little sense of greenery or open space; the impression is of a claustrophobic enclosure--a prison, in fact, one you reach by walking through a dark hallway, flanked on one side by Marta's "sari-sari" store (it's a measure of O'Hara's mastery of space that you eventually have a good idea of the complex's layout). When at one point Bobby evades Babette and runs out into the outside world, it's as if he's attempting an escape; Babette chasing him down is like convict chasing fellow convict--she does so out of fear of reprisal. When she finds him, their laughter is a surprise response to the absurdity of their situation.

It's not just the prison metaphor; every once in a while the community holds a regular 'the court of public opinion,' where a quarrel or scandal spills out of one apartment and everyone else pours out of theirs to enjoy the spectacle. When, say, Cora screams at Domeng for bringing home his mistress to live with them, or when a serial rapist roaming the outside streets claims a new victim and the men blame hapless Bobby, the people line up in a circle round the grappling combatants, everyone yelling their opinions simultaneously, at full volume. The case is ultimately worked out to everyone's satisfaction (the winners brag, the losers put blame elsewhere--in Cora's case, on the mistress), both parties often suffering the same penalties: insults, laughter, utter shame.

Against this social context Bobby and Babette draw close. We have been with them from before the tentative beginnings of their relationship, so we know who they are and what they have--that their affection grew out of Bobby's need for a surrogate mother and Babette's need to pour love on something other than cacti. At the same time O'Hara makes us aware of what the neighbors are like, and we flinch in dread at the prospect of their eventual exposure. Gossip has already spread; a gay hairdresser accuses Babette of caring for the handsome Bobby because she can't find a man otherwise; Marta's no-good son is attracted to Babette, jealous of Bobby. Even we wonder: is Babette thinking of taking advantage of Bobby? Would it be wrong if he responded?

O'Hara handles the issues with delicacy, knowing full well that a misstep could lead to bathos, or worse. He's helped by a terrific cast (Anita Linda, Metring David, Mario Escudero to name but a few), most of all by Aunor and Roldan.

O'Hara considers Roldan the finest Filipino actor alive; in this picture you see why. He has a freshness and modesty impossible to fake, a direct link with the audience that keeps them on his side no matter what (when Babette at one point orders him to strip and he does so in front of her, the scene is made funnier by the fact that he clearly has no idea what his nakedness is doing to Babette).

Aunor by this time had already been called one of the Philippines' finest actors, in far showier performances. In Bakit Bughaw, she takes her archetypal role--the oppressed, dark-skinned little Filipina--and plays it with a lack of self-consciousness that is astounding, as if she invented the character on the spot (which if you've seen Ikaw ay Akin (You're Mine, 1978), Fe, Esperanza, Caridad (1975) and Ina Ka ng Anak Mo (You're Mother to Your Son, 1979) among many others, you'd know isn't true). Aunor matches O'Hara's immense patience, gathering detail after detail until her character feels as believable as any real person--is more believable than any mere person because imagination is involved. You feel as if you knew someone like this, that this was perhaps based on (for all you know) your next-door neighbor (which is one of O'Hara's secrets--that his characters are always based on someone he knew or met in one of his daily walks about Manila). This film, of which there is officially no print left in existence, is one of Aunor's finest performances, one of O'Hara's best works, and one of the great unknown--perhaps lost--treasures of Philippine cinema. 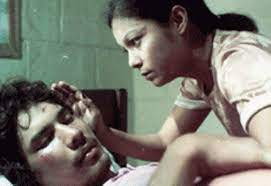 It is a pity no print of the film exists.

True. But there are video copies, and hopefully someone will do the work of improving on them.