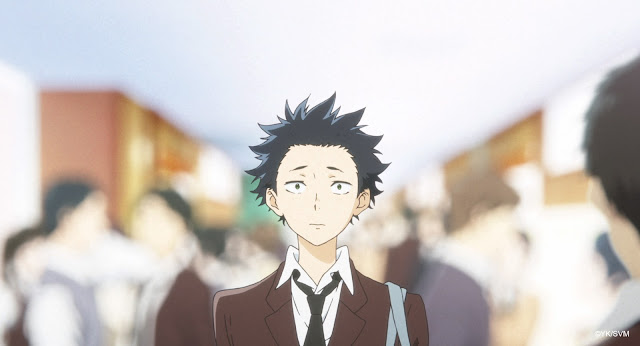 (by Alex Vera and Noel Vera)

The film assembles pieces from the manga to create a rawer, more emotional experience for the viewer. Words are spoken and misunderstood, characters have shameful emotions they would like to keep hidden, and drowning out the general confusion is the roar of hormonal teen energy.

Yamada’s camera plays up these feelings. She shoots simple scenes of people talking from odd angles, captures Shoya walking a crowded hallway in slow motion, the camera (briefly assuming his point of view) fixed pointedly at the floor, avoiding faces. No dialogue, only music looping over and over; Shoya looks awkward tiptoeing around people as if crossing a minefield. No, he’s not at peace with the world--he’s always finding himself at the wrong place at the wrong time, a carefully blanked expression hiding in a sea of lively faces.

Yamada likes to keep her camerawork simple and her imagery busy, moving her actors instead. People gesture as they talk, their hands and feet as expressive as their faces; in quieter scenes Yamada insists on having something cross the screen: a bush, a leaf, an arm, a leg. Every twitch or flutter catches your eye, provokes a feeling as opposed to thought; in a way Yamada wants you to focus on the emotion in the motion.

As a visual style I think it works -- you want to question what’s happening but you’re constantly distracted, tangled ever more tightly in her web of emotions.

The film is all about feelings, not so much about salvation for Shoya (who ends up being the most sensible voice in the film) or even acceptance of Shoko (who has always been cherished by her mother and sister). It’s less about what teens say and more about the silent voices that drive their actions. Nothing that happens in the film is logical; everything is initiated, negotiated, resolved by impulses that dent lives, sometimes seriously,* though some impulses can actually heal.**

*(Shoya when called out for bullying Shoko is himself bullied; when he tries to name others who also bullied Shoko with him he’s immediately shouted down. Condemned then ostracized by classmates and friends, he attempts suicide.)

**(Shoya with persistence eventually redeems himself to Shoko’s family.)

As for the bullying --

Why do the other students turn on Shoya for bullying Shoko? Because he’s the villain; because he got caught. Bullying him is not just fun but accepted; it’s cruelty wrapped in a cloak of righteousness. Why does Shoya repent? Guilt. Self-disgust. A desire to re-integrate into general society.

In the end Shoko attempts what Shoya did near the beginning, the sum result of years of silent suffering and unrequited love--and she does so (bit of ironic contrast here) against a backdrop of communal celebration, a fireworks festival lighting her view of the drop from her apartment balcony.

Bullying in America is in my experience blatant and violent; bullying in Japan (as depicted here and in other anime) is an apparently different creature. Not a lot of blood, just backbiting; not as much shoving, just isolation. Insults are insinuated, often cruel; the bully is constantly calculating and when outed, pivots to pin blame on a scapegoat. Bullying in Japan is apparently an art perfected through centuries of refinement--like kendo, only subtler, less physical.

I thought A Silent Voice told its story well, save for Shoko, who felt like a macguffin. Maybe that’s Naoko Yamada’s point: it’s not so much the person but their presence (existence?) that provokes conflict; it’s not so much Shoko the person as Shoko the deaf mute, victim, martyr served up for our delectation. If this film is meant to expose bullying, why keep Shoko so passive? Why not show her fighting back, even unsuccessfully?

Maybe the director didn’t want to take away from the pathos of Shoko’s situation. Maybe she was hesitant to make Shoko unlikeable, which she risks becoming if she fights back. Maybe her focus is more on the people around Shoko and their reaction to her disability; making her a more complex creation would muddy the waters. Maybe she loves Shoko too much to want to sully her with anything as mundane as anger and a thirst for vengeance. All I can say is: it is what it is. Je ne sais pas.

In the end life goes on, everything returns to normal, bar Shoko and Shoya becoming a prospective couple. An unremarkable end to a remarkable film, but the sudden tranquility, the feeling of arriving at a place of peace feels welcome, even fitting, considering the storm we’ve just weathered through. 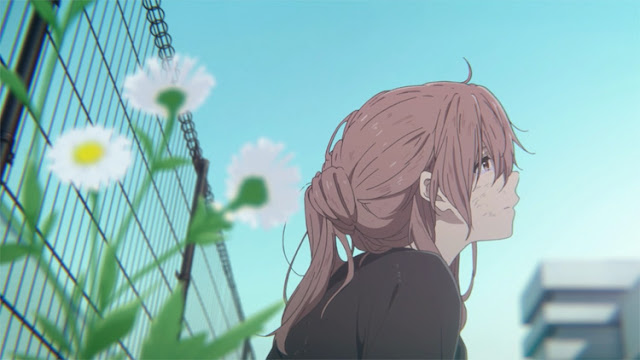