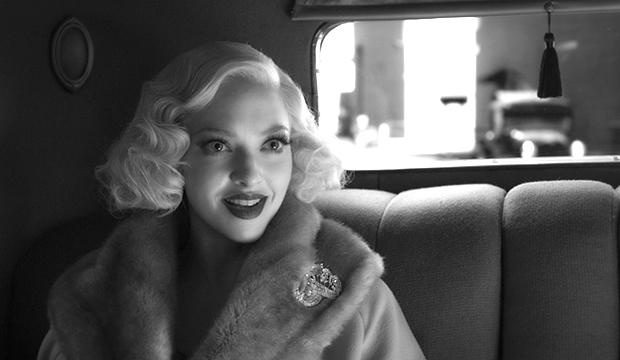 Not here to bury Mank; I defer to Welles specialist Joseph McBride's demolition job which may be angry but also densely authoritatively detailed-- he knows of what he speaks. Me? Just here to put my two centavos in.

Entertaining enough, though I take some exception to the look. Fincher in an interview claims to have worked on degrading the high definition video footage by some 75 percent, adding scratches and in carefully timed intervals cigarette burns to indicate reel changes. Possible my own eyesight's degraded 75 percent but the high definition still looked pretty well-defined to me, the scratches confined to a series of propaganda newsreels projected in a screening room-- overall the 'film' looks sterile and barely touched by fingers, much less time.

The cigarette burns are there, and (like Fincher) can't believe how much I miss them, not to mention the soft pop! in the soundtrack when the reel has been 'switched.' It's like popcorn smothered in what passes for butter; the 'butter'--likely hydrogenated vegetable oil with dubious nutritional value--has been part of the moviegoing experience for years (decades for me) and now promises to be a permanent fixture of the unattainable past.

I get that it's easier to start digital and make it look analog in postproduction, but I wish Fincher had gone all the way and broke out the 35 mm cameras, shooting in Academy ratio. Plus I have to question some of the lighting and camerawork-- not so much '40s filmmaking as some vague compromise between Fincher's sidling sophisticated style and the more direct '40s filmmaking. Fincher in the same interview mentions he wanted something that looked as if "it was found in the UCLA archives-- or in Martin Scorsese’s basement on its way to restoration." I don't see that, and for someone with Fincher's reputation for micromanaged thoroughness I'm disappointed at the halfhearted job.

The sound effects and track are a marvel tho-- mono sound all right, and I've mentioned the pops and hisses. Trent Reznor and Atticus Ross' score is easily the best thing in the picture, a combination of swing band brass and melancholy piano that I wish Fincher had listened to more closely, if he wanted to evoke the old in a new way.

Mank like Kane jumps back and forth in time tho the latter's structure is a bit more sophisticated, based on the idea of a newspaper article: the opening News on the March! documentary acts like an article's lead paragraph-- gives a summary of the topic in quick punchy terms, which the rest of the film fills out in more detail. People lead busy lives and presumably haven't the time to read an entire article; hence the opening paragraph, which offers the reader a chance to decide if he wants to continue reading or not.

We continue with Kane-- how could we not? The News on the March! reel is a lively amuse-bouche and as the film progresses we recognize this or that detail previously mentioned, amidst a parade of ambiguities and unanswered questions. Mank draws us along through a different gimmick, its margins stuffed with 'cameos' from Chaplin on a piano to Sternberg hanging out in Selznick's office to Louis Mayer knocking John Gilbert to the ground. Love that the writers-- Lederer, MacArthur, Kaufman, Perelman-- are granted a privileged roll call and Hecht above all a special mention (of the tinseltown writers of the period he's my favorite and yes I include Mankiewicz). Even Cedric Gibbons enjoys a brief walk-on (or walk-off, he's on his way out the door).

We're asked to believe Mank (Gary Oldman) wrote the entire script of Kane. We're asked to believe Mank did so partly as revenge on William Randolph Hearst (Charles Dance) for masterminding a smear campaign against Upton Sinclair's (Bill Nye) doomed 1934 gubernatorial run; partly as penance for somehow causing or failing to prevent the suicide of a (fictitious) friend, wracked with guilt for helping the smear campaign with faked propaganda shorts; partly as a belated attempt to wipe the tarnish off his integrity-- the film's most creative element, as far as I know. Mankiewicz was more likely to vote for the Republican candidate than for Sinclair.

That was the silliest part of the film for me: why concoct a fairy tale about a soused cynic morphing into a reluctant idealist? Mank, again from what I know, was driven-- to drink, to self-destruction-- by demons, and leaving the question of motive for us to sort out ourselves would have made I think for a far more interesting film than this forlorn attempt at fictitious (if gratuitously topical) windmill-tilting. Why write a script (with name prominently attached) attacking one of the most powerful figures in America? Because Mank longed to stand with his toes curled over the precipice edge; because he wanted to feel the wind coursing gently between those toes, flapping his pajama sleeves on their way up to fluff the hair on his forehead. Because he wanted to stretch his arms out wide take a deep breath take a small step forward and

Motivation-- what drove Fincher to do this? Interviews suggest a knotty relationship with Welles: on one hand he lists Kane as one of his favorite films, on the other he keeps stressing how Welles stood "three feet to the left of Gregg Toland," and shouldn't talk about how easy it is to learn cinematography. McBride lists reasons why Americans love to hate Welles; in the case of Fincher one suspects it's a case of the son seeking to pull down his spiritual (artistic?) father-- Fincher feeling that to become a great artist he has to topple his idol, or at least cut him to size. "Dollar-book Freud," Welles liked to say (about 'Rosebud' in Kane), but it's difficult to resist connecting the dots.

Mank is in some ways atypical of Fincher: his best work hinges on a protagonist consumed by obsession-- the terrific cable series Mindhunter followed three people obsessed with the idea of developing a new way of hunting criminals, by interviewing them and finding out what makes them tick; Zodiac (his masterpiece) followed a handful police officers and reporters obsessed with the Zodiac Killer. This obsession with obsession apparently came to Fincher at an early age: his own father Jack would latch on to one odd pursuit after another, at one point attempting to fabricate a board game, at another trying to figure out a magic trick, at yet another writing a screenplay on Mankiewicz. The last has become David's long-delayed tribute to Jack: the latter passed away in 2003, and his son would need another seventeen years to bring the screenplay to the big-- sorry, 65-inch high-def-- screen.

Why obsess over a man so incapable of obsession? Because the man wrote Kane? Because his story (at least in Mank's own words, and in Pauline Kael's notorious essay) is a parable of the clever writer shafting his credit-hogging director? As it stands the film is really about a man seeking some cause, any cause, to obsess over-- a subject with which Fincher is thoroughly familiar, after all.

Fincher in a throwaway remark does have this to say about Welles the writer "I've seen movies he's made from scripts that he's written. They're not in the same league."

I don't know. Arguably Welles has not written a script as polished and ingeniously intricate as Kane; most of his work are adaptations, sometimes improvements on frankly pulpish sources. Touch of Evil, based on Whit Masterson's book, sharpens the racism subtext; Confidential Report (a.k.a. Mr. Arkadin) takes off from some radio scripts Welles produced to become one of the most bizarre films ever made. F is for Fake employs footage from Francois Reichenbach's documentary to fashion a kaleidoscopic subversion of our notions of authenticity (if we're talking ingenuity I say Welles here gives Mankiewicz a run for his money). The Magnificent Ambersons, even in its mutilated state, is a more emotionally profound work of art than Kane can ever hope to be-- yes it's Welles channeling Booth Tarkington but Welles' take is darker (the studio's reshoots are actually more faithful to Tarkington's uplift ending, while Welles was aiming for something closer to Chekov), and arguably it's Tarkington channeling Welles (Welles claims his father Richard served as inspiration for Tarkington's automobile entrepreneur Eugene Morgan).

Then there's Chimes at Midnight which stitches together four Shakespeare plays and shifts focus from the heroic royals to the fat comic relief. Aside from featuring Welles' one battle sequence--easily one of the greatest ever filmed--it features Welles as the larger than life Falstaff, playing adoptive father to the secretly ambitious Prince Hal (or: a portrait of Welles as a young man). Not in the same league? Well yes. In the case of Ambersons and Chimes at least I'd say Welles did better. 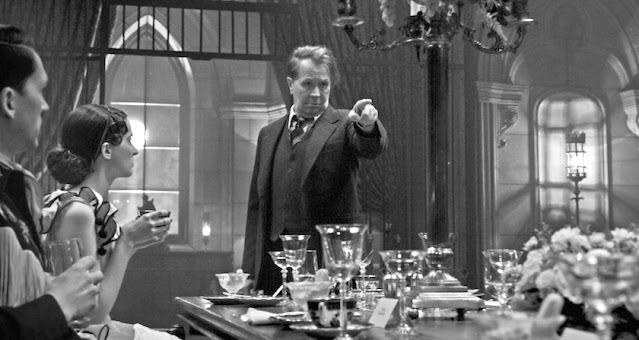