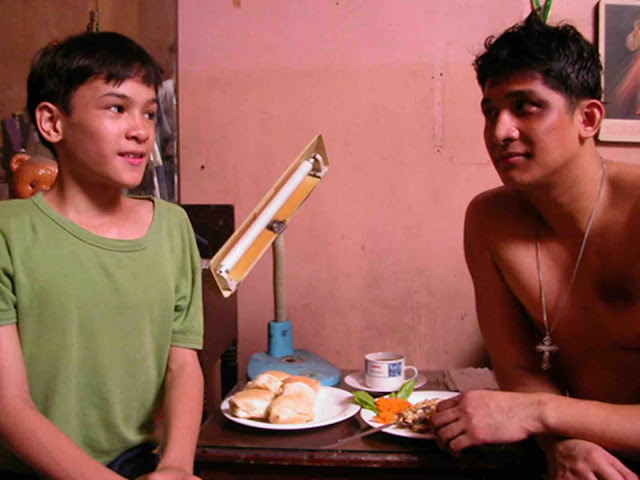 Blossoming to the Max

The film is notable in part for what it's not. It's not your usual drama about a doomed homosexual--Maximo lives in the slums of Sampaloc, Manila, but his life isn't grim, and aside from an early case of gay taunting, he isn't being particularly oppressed. He lives with a family of housebreaking thieves--in fact his father Paco (Soliman Cruz) is the neighborhood crime boss--but they don't slap him around, or tease him, or condemn his femininity; if anything they love their little queer brother, and he cooks and cares for them the way their dead mother would.

It's a startling portrait of urban Manila--startling because of the realism (you can smell the garbage strewn in the alleyways), which provides background and contrast to the fresh yet persuasive twists on details. Solito, using a digital camera (operated by cinematographer Nap Jamir) and a limited production budget, builds on Michiko Yamamoto's script to fashion a remarkably gentle yet mature melodrama not about gay angst, or anguish about the condition of one's homosexuality, but about first love and fidelity to family. The film is no Brokeback Mountain, which presumes our total ignorance of years of groundbreaking gay filmmaking; instead, it assumes we're aware of all the tired clichés and we want something more, something different, something a little more subtle and sophisticated. Imagine, if you will, an Ozu with an overtly gay sensibility, presenting you with a fully and intricately realized world of side characters, family relationships, street politics, codes of honor.

There's a plot, of course, although you could almost imagine the film easily meandering along on its characters and settings without one: Victor is newly assigned to the neighborhood and determined to clean up the town, and he is especially interested in Maximo's father; Maximo's infatuation with Victor and Victor's noble commitment to the law, in effect, is in direct conflict with his loyalty and love for his supportive yet larcenous family.

Ms. Yamamoto's previous script Magnifico (2003), about another young boy who went about trying to do quixotic, often impossible things for family and friends, introduced us to her unique brand of quiet drama and gentle humor. Maximo Oliveros is a small yet significant step forward, a broadening of horizons that deals with the collision between two opposite viewpoints (the idealistic cop's, the thieving--yet in their way honorable--family), and a young man's blossoming sense of love and sexuality. I've mentioned Ozu, and Ms. Yamamoto does seem to take her cue from his understated, microscopically focused storytelling style, but in a Filipino setting. She seems not only familiar with the milieu of Sampaloc neighborhoods, but also seems to understand the kind of unspoken bonds that develop between father and child; between elder brothers and their youngest sibling; between family members where the mother is no longer living; even the delicate, fragile friendship that can form between a sensitive straight man and his adoring young friend (Interestingly, while Magnifico abounds with well-drawn female characters, this film is notable for the absence of women--we're aware of the mother mainly from her absence, her functions filled in to the best of his ability by Maximo).

Mr. Solito made his auspicious debut with Ang Maikling Buhay ng Apoy, Act 2, Scene 2: Suring at ang Kuk-ok (The Brief Life of Fire, Act 2, Scene 2: Suring and the Kuk-ok, 1997) an extravagantly beautiful stop-animation short, about a girl and her mythological friend. It was full of bright colors and fascinating textures, but most interesting of all was the sense you got that it was but a fragment of a greater whole, a fantastical world based on Palawan mythology (Solito is from Palawan, and the short is in fact based on a scene in his full-length play Ang Maikling Buhay ng Apoy). Mr. Solito has done interesting work since--Impeng Negro (Black Imp, 1998), an adaptation of the Rogelio Sicat short story, and Basal Banar (Holy Truth, 2002), a meditative documentary about his Palawan homeland--but I'm still waiting for him to return to the ravishingly lovely world too briefly visited in his first animated short. In the meantime, he's obviously recognized that Ms. Yamamoto's script is a career-making project ran with it, turning it into a career-making picture. Hopefully we'll hear more from this relative newcomer. 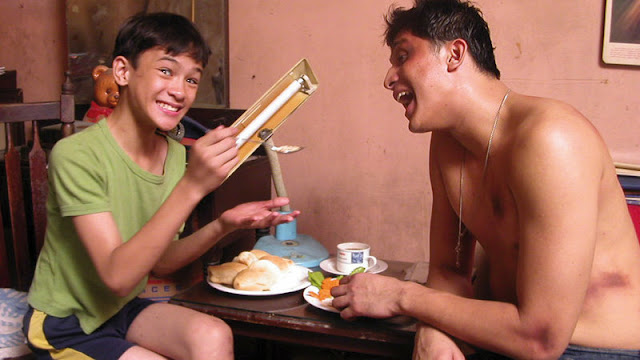