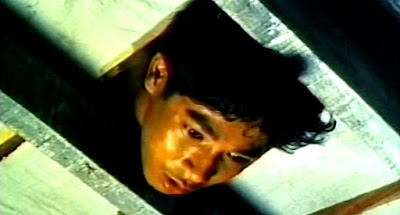 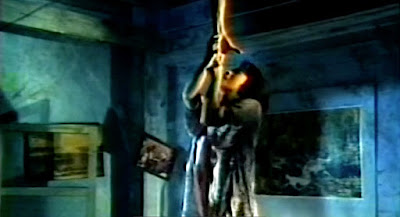 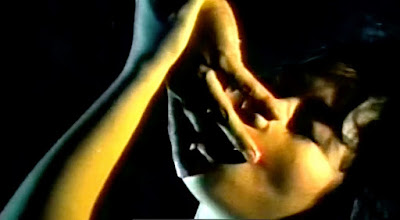 Come finally to the notorious Scorpio Nights (Peque Gallaga, 1985), a quickie production reportedly mounted (by Regal Studios) to take advantage of the promise of censorship-free screenings at the Manila Film Center. Just to make the challenge that much more difficult, Gallaga had suffered a heart attack in late 1984 and was still bedridden when shooting began (he reportedly directed most of the film lying on a portable cot).

The premise is simple enough: Danny (Daniel Fernandez) is a student living in an accesorya, a collection of tiny urban tenements; his dormmates have left for the summer vacation and he sits idly in his room, dreaming of the woman (Anna Marie Gutierrez) living below with her security guard husband (Orestes Ojeda).

Late into the night (or early in the morning) Danny peers between the dorm floor slats as the guard lets himself into the apartment, sits humming at the kitchen table, pours a glass of water, eats his rice-and-sardines supper, sets the plate aside, washes his fishy hands (Danny high above crouched on hands and knees like Spiderman, rotating round the crack for a better view), brushes his teeth, ducks under the netting and--like a proud proprietor unveiling his finest jewel--lifts his wife's nightgown to reveal the sleek triangular fur.

A day or two later Danny runs into the accessorya's courtyard from out of a thunderstorm, takes brief shelter against the rain at the guard's doorway, leans back...and the door swings open. Peers inside: the bright pink netting, the figure underneath: "Don't bother washing the dishes," calls out a sleepdrugged voice, "I'll do them in the morning."

Danny heart in mouth decides to take a chance: humming his approximation of the guard's aimless melody he sits at the table; pours himself a glass; rattles silverware; wets his fingers at the sink; slowly breathlessly steps out his sandals to sit at the bed. It's absorbing theater projected on the big screen and foremost in your mind is the question: "Will he dare? Will she find out? Will it happen?"

Cut to him atop her once more, the jump from one scene to another confirming the dream theory. Danny reaches for the alarm clock to check the time (time to leave) only to find the wife clutching his arm, keeping him from leaving.

You can see what Gallaga was shooting for: a lowbudget version of Nagisha Oshima's In the Realm of the Senses complete with Japanese-style erotic lighting--though I can't help but picture Gallaga in a movie theater, watching Hilda Koronel under her ethereal mosquito netting in Lino Brocka's Insiang and thinking "yes." The difference between Oshima's beautifully crafted political tract and Gallaga's is tension: the wife bored beyond belief, open to try something--anything--new, the student alone in his overhead dorm pining for the lonely wife; looming behind, the figure of the guard with his holstered sidearm. Gallaga, working on a news article brought to him by Rommel Bernardino (who was this production's art director), changed the husband's occupation from police officer to guard--daring as they were they couldn't be that daring; with a security guard one has (if the government censors ask) plausible deniability. The basic situation tho remains: wife trapped by society and a neglectful husband; Danny literally a student, a kneeling supplicant ready to learn.

And learn they do; behind the husband's back, beyond a hung curtain, beneath the matrimonial bed, the lovers defy convention to couple again and again. Worse, the wife teases the student with sly asides (To her husband, while Danny hides under their bed: "What would you do if a thief broke into this apartment?" "Why, shoot him of course."), prods the boy into taking increasingly perilous risks (she tosses Danny's clothes across the floor and--while husband takes his morning shower--watches him scamper out from under the bed to dress). The wife--with Danny not far behind--has developed an appetite for danger, uses her wits and gift for improvisation to stage unlikely erotic scenarios, refuses to return to the sheltered life of commonplace monogamy.

The concept is perfect for the audience: simple to understand, sufficiently flexible to evoke any number of interpretations; it's perfect for Gallaga too as it provides the structure to organize his undisciplined storytelling while allowing for his wildest digressions. There are images of voluptuous beauty (the wife halfdressed in a kimono robe, nibbling unripe mangos) and of comic surrealism (Danny's face sprouting out of the ceiling; his arm reaching down from above so the wife can suck on his fingers*)

The hapless husband doesn't just represent the established order or clueless Filipino machismo; Ojeda manages to sketch a multilayered portrait of what should be a plain villain role. When we first watch him wander through the apartment he's master of his miniature domain, humming eating climbing on top of his woman; when he has his first extended conversation with his wife we learn to our surprise that he also has empathy--he has learned that his supervisor is being fired and feels some kind of way about it.

In the guard's second extended dialogue with his wife we learn something else: they can't have children. Their marriage is basically a sterile affair, with no child to bind them tighter together. The idea must been eating away at him; he comes to her weeping, asking her not to leave him, and where Danny offers youth and imagination and boundless enthusiasm the husband has little to offer but pain.

The wife must have a thing for men stripped of their machismo; time and again she threatens Danny with exposure (there's something catlike about the wife's need to toy with her playmates). Comes her husband--stoic facade cracked, eyes streaming tears--how is she to respond?

Unspoken subtext, which actor Ojeda suggests in the manner in which he pleads to his wife: husband has finally realized his wife may be unfaithful--why else is she being unusually passionate?--and the idea has shaken him to his core, forced him to look at his wife in a new light.

Here's the thing (avoid this and the next paragraph if you plan to watch the film!)--the wife is moved; she (in a fine quiet little scene by both Gutierrez and Ojeda) gives in to him. Throughout the film we see her face and her look of dissatisfaction after lovemaking and we think: "this relationship is in trouble." Suddenly the man has opened up and to her he's sexy again, as adoring and vulnerable as a sick puppy. Only now the specter of cuckoldry has whispered into the husband's head;  someone has violated his sense of manhood, and that someone (and his wife) must pay.

Which is how it is with Filipino men, apparently; how it was with the Marcos regime, how it is with the present regime. Think of Guy de Maupassant's "The False Gems," where a man's loving wife is proven unfaithful; when he remarries it's to a virtuous woman with a violent temper, and he goes on to live an unhappy life. Never mind that a damaged relationship has been somehow made to work; fidelity is what matters. Maupassant's story turned on the finely fashioned irony that when the wife dies and the husband tries to sell her jewels what he thought were fake gems turn out to be real; it's her fidelity that was fake. But when he remarries the jokes on him: he makes sure his second wife's fidelity is real, only it's the prospect of happiness that's false.

That's the Maupassant story, and I think it's what the film suggests as well: that wife and husband could have had a happy rest of their life together, with the husband never taking his wife for granted again and the wife genuinely having fallen in love with her husband again, and only this uncomfortable little coal of a dirty secret glowing between them. Only the husband--the man the fascist government if you like--isn't happy with the new status quo; he has to satisfy his macho honor by tearing her down, tearing it all down. If he doesn't have his honor he has nothing, and his response is consequently brutal and perverse.