So get this--black man becomes first black police officer in a large largely white town (the "Jackie Robinson of the Colorado Springs police force" as his superior puts it). He's consigned to the records room, requests a transfer to undercover; sees a recruitment ad for the KKK, dials the number, gets an unexpected voice at the other end, improvises a racist rant, is invited to join the group.

Sounds like one of the more outrageous skits dreamed up for the short-lived if memorable In Living Color--but it's a true story, based on Ron Stallworth's autobiographical account Black Klansman.

The film runs with this unlikely premise and part of the fun is watching Ron and Flip constantly being caught off-balance by the challenges and opportunities thrown their way, having to think fast on their feet. At one point one of the Klan suspects Zimmerman of being Jewish and wants to apply a lie-detector test at gunpoint; at another Ron finds himself on the phone with the Klan's Grand Wizard, David Duke (a hilariously bland Topher Grace) and they develop a surprisingly (Chillingly?) warm rapport.


Driver plays Flip as an unselfconscious lump who thanks to the Klan's virulent anti-Semitism develops some awareness of his racial identity. Grace's Duke is by turns funny and frightening: funny in his unreflective racism, frightening in that his vanilla almost wholesome charm is what may have helped sell the Klan as an increasingly acceptable presence in 70's America--a perhaps an even more acceptable presence in America today. In their conversations together Duke suggests a loneliness, a desire for contact that seems almost likable--Lee even feels the need to apply the brakes a little, have Ron motion his colleagues around him so they can have a collective laugh. It's a tribute to Grace's sly subversively vulnerable performance that you almost feel sorry for the man.

Almost. Lee blurs the lines a bit but at one point or the other makes it thoroughly blaringly clear where he stands on the issues, arguably the film's main weaknesses. His Klan folk are mostly paranoid but easy to outmaneuver, easy to identify from the ceaseless stream of racist rants--Grace's Duke is arguably an exception, though even he has his moments of fecklessness.

Lee begins the film with Alec Baldwin as a concocted college professor clumsily listing Klan talking points, forgetting his lines, asking for cues from an unseen assistant; big contrast to Stokely Carmichael (a.k.a. Kwame Ture) whose speaking engagement Ron is assigned to attend--during Kwame's speech Lee turns up the visual rhetoric, photographing Ture (Corey Hawkins) from various dramatic angles, surrounded by a sea of faces shining with admiration. Ron is understandably impressed, and feels doubt about his mission of infiltration.

That would be the film's other main flaw: Boots Riley, director of the year's other most outrageous comedy Sorry to Bother You, tweets an indictment of Stallworth, claiming his role in monitoring black activist groups was more extensive and more malignant than what is shown onscreen.

Riley goes on to make other claims, some of which seem extreme, but his basic point is valid: history does suggest that the police and the FBI had an antagonistic even violent relationship with these groups (There's no direct evidence linking Stallworth, but records were reportedly destroyed). Lee makes an effort to soften the implications of this period in Stallworth's career--having him voice doubts, having him fall for a fictitious activist named Patrice (Laura Harrier). Their relationship as a couple suggests Stallworth's evolving attitude towards student groups, an attitude that itself seems fabricated.

Lee does eventually respond to Riley's criticism in an interview-- "Look at my films: they’ve been very critical of the police, but on the other hand I’m never going to say all police are corrupt, that all police hate people of color. I’m not going to say that. I mean, we need police."

If the film contains material that softpedals and alters meaning--and Lee is hardly the first biopic director to do so--it also contains images of considerable power. At one point the Klan screens Birth of a Nation, D.W. Griffith's monumental potboiler that helped revive the movement. Part of what makes the scene so disturbing is watching this group of presumably uneducated yokels laugh and scream and applaud throughout the three-hour silent film, as appreciative as--and perhaps even more enthusiastic than--any cinephile group. When applauding a virulently racist work of cinematic art, what's the difference between the audiences? And if there is a difference--how much does it matter?

Lee takes a page out of Griffith's rabblerousing playbook and intercuts the screening with one Jerome Turner (Harry Belafonte) telling the true story of Jesse Washington, who was lynched in Waco, Texas. Dealing with the past Lee then fast-forwards to the present--to last year's Unite the Right rally in Charlottesville, Virginia, where a car rams into and kills Heather Heyer.

This I submit is Lee's strongest intended or unintended point: if the racists portrayed in this picture are so easy to outwit then why Trump's ascendancy? If they're so easy to neutralize why did the Unite the Right rally happen, and why did that driver feel he could ram his car into a crowd of people? Lee doesn't provide all the answers if any, but he's always been ready with questions, always willing to prod us to at least try and respond. 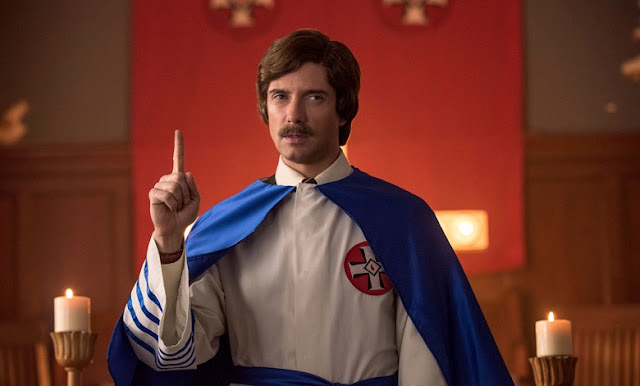