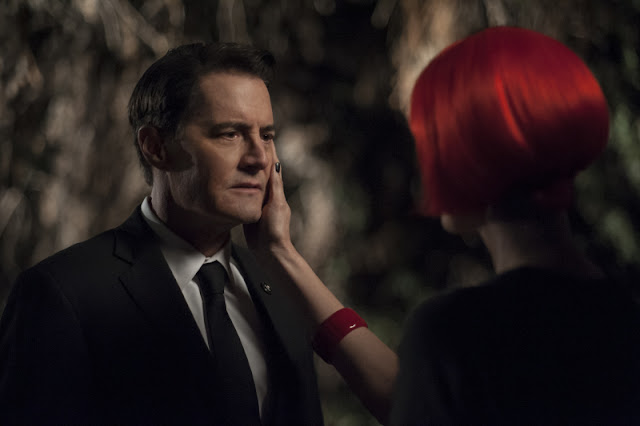 In the first part of The Return finale co-writers Lynch and Frost assembles most of the series' characters (those left alive I mean) at the Peaks sheriff's station, lashes every (well most) storylines together in a single great gift-wrapped all-encompassing Christmas package of a resolution. In the second half Lynch takes that package stuffs it under the belly of the Trinity bomb and fires the device, sending everything up in a mushroom cloud spinning slowly against the dark New Mexico sky.

Plenty of dropped jaws last Sunday night, even if you've been repeatedly warned not to expect miracles ("He's not going to answer all questions"), even if you've seen Mulholland Drive, Lost Highway, the previous two seasons of Peaks. Plenty of unanswered questions--What happens to Beverly Paige and Benjamin Horne (An extramarital affair?)? What became of the girl that swallowed the frogroach (Grew up to become Sarah Palmer?)? What is Sarah Palmer and why (The Experiment?)? Where's Audrey Horne (In a coma? An asylum?)? Where's Diane Evans (or Linda?)?--but the biggest question of all in everyone's minds may be: "Was all that worth it?"

Was it? Twenty-five years of waiting (actually twenty-six; the production was delayed a year), then watching each episode week after week for the past three months--say what you will about the overall film/show/whatever (its very identity is disputed) you can't help but marvel at the bits and pieces. The way for example Lucy's eccentric inability to understand cellphones ("That means they're mobile pumpkin") planted in episode 4 resolves itself just in time for her to take the crucial shot in episode 17, the whole protracted running gag a commentary on Lynch's ambivalent feelings towards evolving technology (on one hand embracing them (see Episode 8) on the other still resorting to analog effects (see first half of Episode 3)).

Then there's the way Lynch and Frost weave age and mortality into the casting (Bob Silva, David Bowie*, Miguel Ferrer, Catherine Coulson, Don S. Davis, Warren Frost (father of Mark), all gone**) the text ("Hawk I'm dying!") the imagery (half the cast's lined weary faces, the looming baleful mushroom cloud) to suggest one of the series' great themes. We all grow old and die (many too soon we feel); the best we can hope for is some kind of reunion resolution return, however brief. Agent Dale Cooper's wish ("I hope I see all of you again, every one of you") had a sobering effect on the happy occasion (Mr. C. had just been beaten); in the light of what follows the implications of his words are heartbreaking.

*(Seen here both in archival footage from Fire Walk With Me and as a giant kettlepot or (as I like to theorize) as something like the clone-germinating Axlotl tank*** in Frank Herbert's Dune (also a Lynch film), the name in turn based on the axolotl salamander (which can regenerate), has since become a song performed by The Veils in episode 15--one of the most disturbing musical sequences in the series)

***(Axlotl tanks as Herbert later revealed aren't really tanks--but then who knows what Bowie's Philip Jeffries really looks like in there?)

And for all the deftness Lynch and Frost demonstrate knitting their narrative strands into an intricate whole you can't help but admire (or loathe if that's how you feel) their willingness to go further. Cooper travels back to 1989--to the night Laura is about to be murdered--and saves her. A breathtaking gesture, the most outrageous of the series of perhaps Lynch's entire career: three seasons and one prequels' worth of storytelling, swept away like so many pieces on a chessboard.

That settled the question for me right there.

Is Lynch cruel for abandoning Audrey in her catatonia asylum Lodge whatever it is? Never mind--with Laura unkilled Audrey never meets Cooper, will (arguably) never be inspired to participate in progressive causes, will not chain herself to a bank vault to end up in a coma (standard issue cliffhanger fate in many a television soap).

Are lives improved by Laura staying alive? Complicated question--the town is saved the trauma of her death and the various tragedies radiating from that death: Maddy's murder, Leland's (debatably tragic) suicide. Most important is the creation of Mr. C who assaulted Diane and (presumably) Audrey, fathers the monstrous Richard Horne, is master of a drug empire that apparently stretches from Washington State to Rio de Janeiro, Brazil.****

****(Despite which Mr. C can't seem to touch innocent Dougie Jones, who defeats his machinations with a box of cherry pie; come to think of it even BOB--the driving force behind Mr. C--loses to a green rubber glove*****)

*****(For even hardcore fans of this show/film/whatever said glove sticks in the craw; they can't believe such a commonplace gardening accessory could obliterate such formidable evil. Good; in my book there should be some such thing that sticks in one's craw, some character or situation or detail too outrageous to easily accept. That glove I would say represents several things: a comment on the ultimate efficacy of carefully laid plans (Cooper on fully recovering in Episode 16 made his up as he went along), a parody of comic-book superheroes and their ridiculous origin stories, a reminder of just how insignificant conventional narrative is for Lynch)

On the other hand Cooper would not have discovered Twin Peaks and fallen in love with its pastries its coffee its people; would not have joined the Bookhouse Boys in their struggle against The Black Lodge, or helped Janie E recover her deteriorating life, or the Mitchum brothers collect their $30 million, or Bushnell Mullins uncover the insurance scam going on under his nose (strange but most of Dale Cooper's more significant accomplishments happened when he was hapless). With or without her murder Benjamin Horne would still be corrupt, Ed and Norma still be unhappy, Laura still be the victim of assault--bad and good, loss and gain, movement and change would still occur in a great revolving cycle. Cooper's gesture when you think about it may not have shifted matters so radically after all.

Doesn't mean we should give up. Cooper doesn't; after triumphing over Mr. C (with a little help from friends) he follows the classic advice Alexander Dumas once offered in a novel (significantly the novel slipped into obscurity but the phrase has stayed with us) is observed by almost all noir heroes and antiheroes hereafter: cherchez la femme, look to the woman. The phrase had a misogynist meaning back then (women are the source of all trouble) but has--in the context of what Peaks shows us again and again--acquired a more disturbing connotation: look to the woman, she's up against some abusive rapacious murderous boyfriend husband father. Look to the woman she may need your help.

Cooper having solved all (well almost all) problems set before him steps back, face superimposed on the screen, and thinks: "we live inside a dream." Implied: this happy conclusion is but one version of any number of possible realities. Unspoken, though apparently in Cooper's mind: we're missing someone. And with little hesitation but some preparation and a poignant leavetaking ("See you at the curtain call!"), he dives in once more to look for the woman at the heart of the mystery.

On looking at women--Cooper and Diane's single night of passion may be the dryest most painfully unpassionate act in the series. After all they've been through you would want the pair to enjoy at least one moment of tenderness; instead Diane clutches Cooper's head to hide his features, sits on his pelvis as if impaling herself on a stake. One might think of PTSD--Cooper resembles the man who raped her and to arouse herself or at least keep herself from panicking she has to erase his face; that or the two are already morphing into troubled Richard (name shared with C's putative son) absent Linda. Maybe they know they can't go back to what once was and are just going through the motion for the sake of, O, I don't know: Old times? New kinks? The hope of recovery? Perhaps something else entirely?

Circumstances may change identities switch entire alternate worlds fade in and out; evil may be shoved back never completely destroyed but Cooper persists--a little more badass this time around as Richard--in moving from one reality to the next, seeking out those who might need help. As far as final statements go--less a loud declaration than a grim quiet commitment--not a bad one to end on. 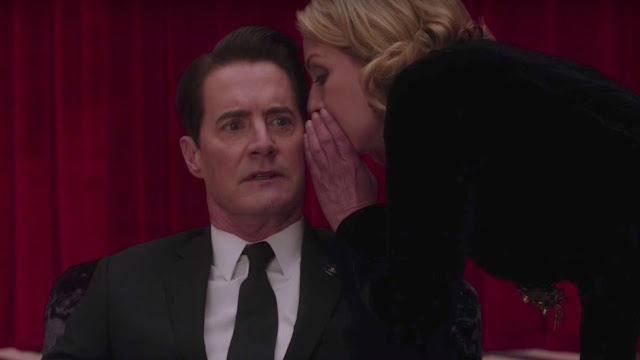 Nice summation. But the bottom line is for all their heavy-breathing efforts Lynch and Frost have produced a narrative that's arbitrary to the point of exhaustion. Bunuel's films have an interior logic. So do Monty Python's sketches. With Lynch/Frost it's just one damned thing after another without rhyme or reason.

I don't know if I'd agree but neither would I say you don't have a point.