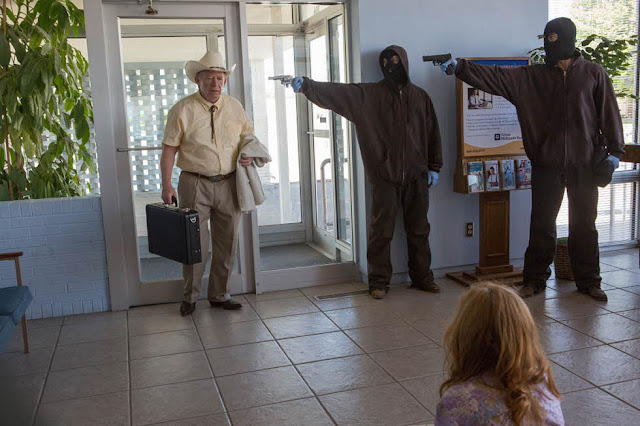 David Mackenzie's Hell or High Water, from a script by Taylor Sheridan (Sicario) turns on a terrifically compelling premise: that brothers Toby and Tanner Howard (Chris Pine and Ben Foster respectively) are so financially threatened by the reverse mortgage loan lent them by a bank--the fictional Texas Midlands--for their recently deceased mother's treatment that they've taken to carefully robbing that same bank's smaller branches (teller's drawers only; no vaults, no bundles, no large bills) to repay the loan.


It's a clever idea with a sense of perverse Lone Star justice one can't help but admire. Add to the mix a pair of perversely winning Texas Rangers in some kind of pursuit: Mexican-Native American Alberto Paker (Gil Birmingham) and One-Case-Short-of-Retirement Marcus Hamilton (Jeff Bridges). Marcus can't help needling Alberto for his ethnicity: "I’ll get to the Mexican insults after I’ve finished with the Indian ones. But it’ll be a while." Alberto counters with semi-effective ripostes ("Maybe one of these bank robbers is gonna want a gunfight and I can dodge my retirement in a blaze of glory" "Well I've seen you shoot; there won't be much glory in it"). It's all hostile and politically incorrect on the surface but Birmingham only occasionally registers genuine annoyance--the way one member of an old married couple does, and interestingly when they're sharing a bed--and Bridges delivers his jabs with enough charm you can believe (if you want to) that Alberto would take the abuse (though little more). Their scenes together skirt the border between daring and unacceptable, skating occasionally across the line and back.

Marcus is the behavioral analyst of the pair--he's sussed out the brothers' motives, narrowing their next targeted branches to one or two possibilities and setting up camp opposite his best guess; of the criminals Toby is the thinker who's come up with their scheme, with Tanner along to add some wild to the ride. The four crisscross a vividly conceived West Texas, all vast plains and rusted barbed wire, junked cars and empty streets lined with shuttered businesses. Mackenzie grew up in Scotland but brings an outsider's aestheticizing eye to the economic desolation; in his juxtaposition of forlorn figures standing against foreclosed properties he visually sums up the sullen anger smouldering in rural American.

Where the film falters is in Taylor Sheridan's script which (as in his previous work) gets the small stuff wonderfully right but misses on the big picture. My biggest problem with Sicario wasn't the details (the mutilated hanging bodies, the legal thinking behind recruiting Emily Blunt's FBI agent) but overall plausibility; as Sheridan himself admits military interventions don't really work, and it's hard to believe given the evidence of recent years (the killing of Bin Laden being a significant exception) that the CIA is all that effective, or that the overall strategy will succeed in the long run. Sheridan tries to adopt the tactic Orson Welles used in his classic noir Touch of Evil (also about border towns, also about drugs) of making the morally corrupt figure (Alejandro Gillick (Benicio del Toro) in Sicario, Hank Quinlan (Welles) in Touch) more compelling but makes the mistake of focusing almost exclusively on the upright law enforcer (Kate Macer (Blunt) in the former, Miguel Vargas (Charlton Heston) in the latter). The end product is an outsider's view that doesn't give us the full tragic arc of the film's most interesting character.

So it goes with Hell and High Water. Sheridan does good work; his premise is crackerjack ingenious, his characters talk and behave as if they'd lounged in rickety rocking chairs and drove secondhand pickup trucks all their lives, with enough willfulness and peppery life in them to crack the calcification encrusting his stereotypes: Katy Mixon's Jenny Ann is a rich slice of softspoken humanity--soft enough to touch something in the taciturn Toby--that turns fiery habanero when confronting Bridges' grizzled Ranger; Margaret Bowman's seen-it-all waitress ("so what don't you want?") isn't as layered but spikes her one brief scene confronting Marcus and Alberto with such emphatic energy you (and I suspect the two actors) want to give her a standing ovation. Combined with Mackenzie's expansive yet mournful images (cinematography by Giles Nutgens, whose lyrical work with Deepa Mehta is easily the best single element in her films) and you have a potent brew of a picture, the kind of smoky white lightning sipped carefully out of a cracked jug while lounging on a hot afternoon porch.

And yet again there's a nagging falsity to the film's overall scheme. Partly it's Sheridan's insistence on overexplicating what Mackenzie so eloquently visualizes--that the banks are part of the propertied establishment the townsfolk have sullenly resented for years (with Alberto making the amused aside that this was where the red man stood with regards to the white man for the past few hundred of those years), that the Howards' felonies are payback and the brothers champions of the working poor. Doesn't help that Pine is cast as the more presentable brother (Thoughtful, intelligent and good looking?); switch the two actors' roles in your head--pretty Pine as the violent hothead and Foster as the thoughtful tactician--and see if the film doesn't sound more interesting.

The ending (skip the rest of this paragraph if you plan to see the film!) has Marcus and Toby in quiet conversation; Sheridan does a nice job of writing dialogue (delivered in understated manner by the actors) that glows with implied menace; all that said, Pine's Toby does earn a free pass--he's rich (or at least his family is), he's free and clear of any criminal liability, he isn't even all that morally culpable (it's his brother that initiated the climactic firefight). Welles' film--arguably the last and greatest of the true noirs--suggests through its title (a touch not a hammer blow) that no one comes away clean from contact with corruption, that we're all to some degree culpable, that our full reckoning may be much delayed but never entirely dismissed. 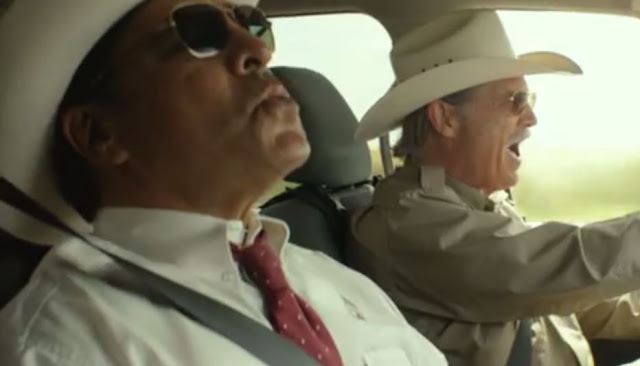