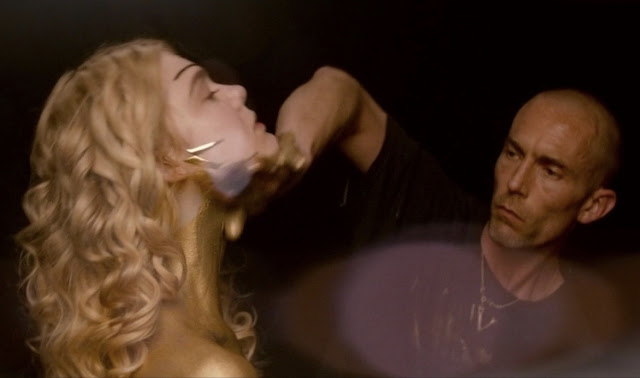 Nicholas Winding Refn's The Neon Demon provokes as many questions as it does responses: is it a horror thriller? An existential comedy? A condemnation of the LA fashion scene or a stylization and glamorization? Feminist or misogynist? Part fantasy or part sick fevered dream?

I say all of the above and none; if anything I'd call it a somewhat exaggerated contemporary documentary on modern-day Los Angeles, a timely rectal temperature reading if you like of the City of Angels, with the thermometer thickly smothered beforehand in a hallucinogenic lubricant.


I'd heard the film called 'shocking' and 'gruesome' and 'gorgeously shot and lit' and licked my lips in anticipation; never expected it to be so funny. Androgynously named Jesse (Elle Fanning) pops up in the city O so clueless and clean you feel as if you can send her out to milk the cows in the early morn; instead she has a series of encounters with increasingly decadent Angelenos, each of which fall under her spell--instead of corrupting her they find themselves investing in her; they buy what she's offering and lift her up to the next level of celebrated supermodelhood.

Everyone wants Jesse--that's the basic premise. Photographers stare at her; fashion designers stop fiddling around and take a closer look. Makeup artist Ruby (Jena Malone) offers to connect Jesse to some crucial folk and later a place to stay; casual boyfriend Dean (Karl Glusman) and motel clerk Hank (a hilariously grimy Kenau Reeves) have designs on her, alternately conventional and rapacious. Even ingesting a part of her confers a kind of grace.

And Jesse stays above it all; perhaps part of the spell she casts is her freshness, her virginity if you like, and this film is all about virginity: in the 16th century sex with virgins was considered a cure for widespread syphilis and gonorrhea, about the same time when Elizabeth Bathory (inspiration for one particularly gory scene in the film) reportedly tortured and bathed in the blood of virgins to preserve her youth (she probably just tortured and drank blood; the bathing story was tacked on afterwards). Also about this time physician and proto-anatomist Andreas Vesalius first named the skin stretched over the vaginal opening the 'hymen' which makes you wonder: what is it about this period and virginity anyway?

Of course there's always the most famous virgin in history and her power to intercede on our behalf--her purity being a consequence of her high status (or is it the other way around?).

Never mind the cursory characterization or minimal dialogue; never mind the implausibility of some of the more outrageous acts depicted (which depend for their credibility on how willing or unwilling one is to dismiss some of the darker rumors about L.A.). Refn is spinning a fable, with generous helpings of Mario Bava, Gaspar Noe and David Lynch, and taps into the medieval potency of old (and unabashedly sexist) myths.

Refn enlists Mary Laws and playwright Polly Stenham to cobble together a 'script'--more a series of scenes of Jesse ascending up the pyramid of fashion success, purely on the basis of her purity. It's a feminist script if you like--the men lounge about and make all the momentous decisions (including one violent if largely implied act of sexual assault) but the women are the livelier creatures who chafe under, endure, bask in the male gaze. And glare at each other. And calculate who's winning the most attention, who's dominating that very gaze. And plot and calculate some more.

It's arguably a feminist script but the director is male and it's his gaze that confers power and beauty and horror. Elle Fanning is a lovely actor, but she's just one of many in a cast studded with beauties; what singles her out and transforms her is Refn's adoration, and under his focused stare she's incandescent. She absorbs his attention and glows with it, and the light pouring out of her is sensual and relentless and not a little obscene.

Interesting note: at one point (skip the rest of this paragraph if you plan to see the film) Jesse starts believing the myth gathering about her ("I don't want to be like them; they want to be like me") and at least one critic feels she's less beautiful in that moment. I disagree; if anything Jesse was less human beforehand: sweet, unspoiled, unaffected by her meteoric rise--a Candidelike innocent ripe for spoilage. When this stain of egotism of self-regard spreads throughout her immaculate papyrus of a character suddenly she's a flawed person filled with hubris and humanity. Suddenly she's believable, palpably real--she's there--and our (and Refn's) desire for her is sharper than ever.

Is The Neon Demon a great film? Is it even a good film? Not sure. At least Refn is upfront about his misogyny and inability to write female characters (unlike say Quentin Tarantino who's repulsively opportunistic in the way he both deifies and degrades women). It's at least something to look at, and definitely not boring. 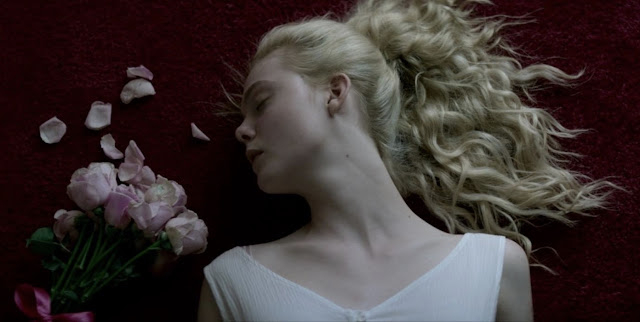 "I'd call it a somewhat exaggerated contemporary documentary on modern-day Los Angeles" I'd saw that. I happen to work on the edges of the fashion industry and regarding the modeling industry in LA it BARELY exists. When I had a designer go to LA to put on a show, he had the worst time finding real runway models. Print models all over the place. Runway models? no. You can see in the final show so many of the girls had to hold the gowns up to keep from tripping on them.


Having existed in this world I completely understand about 90% of this film. These models are so young when they come to you (the industry, and indeed police has begun reigning in designers who use 12-15 year old models in recent years the restrictions now so heavily enforced its all but impossible to launch pre 16)when you first meet them you see it. They have a freshness a glow, an eagerness that comes with youth. Fashion is such a brutal vicious industry even a small amount of time will bleed you dry.

In my experience, these kids start to believe their own hype. They are beautiful, they are perfect, they are EVERYTHING so unaware it can vanish in an instant. Then the next perfect model comes along, and you're so old (20 and above) you can actually see the light in their eyes dim.

I'm not sure what you found funny. I didn't find it funny at all.

I did find some moments beyond perplexing (Jena Malone moment in front of the moon, you know the scene I'm talking about). Other 'shocking' moments were so much for me. Jena Malone last scene at her place of work wasn't shocking to me. It was so painfully sad. I know most don't see it that way.

All and all I found it a visually entrancing tour of a non existant LA modeling world that was bluntly truthful of what it means to be model.