The film's scope is smaller, focusing this time on a single woman rather than several groups, its milieu a more recent era (1997--Hong Kong had just been returned to China) rather than a crucial moment in the Philippines' past. But here again you sense that Diaz isn't just marking time--that he's shifted focus and approach from the mythical and broadly distantly historical to the personal and (somewhat) contemporary.

You see a difference: Dostoevsky was a baldly philosophical profoundly psychological writer with a strong dash of mysticism; most of Diaz's films (from Kriminal ng Baryo Concepcion onwards) reflect this. Tolstoy's fiction is more even-tempered, more traditional in form, with a careful regard for characters in their broad social and historical context. Tolstoy's art is more difficult to achieve and maintain, Dostoevsky's more distinct and immediately compelling.

Grossly oversimplifying of course; Dostoevsky has at one point or another considered social issues (crime and reform) and Tolstoy--especially in this story--delves deep into a man's psychology and soul. Diaz for his part often positions internally tormented figures at the forefront of his films, occasionally focusing attention on an individual (Kriminal ng Baryo Concepcion, Heremias, Florentina Hubaldo CTE), while unfolding that individual's story against a carefully observed sociopolitical background (Norte, Hele sa Hiwagang Hapis).

I'd say The Woman Who Left was Diaz's first explicit attempt at channeling Tolstoy, with interesting results: Tolstoy was overall better at plotting, and use of his story structure here means a (relatively) swifter-paced more emotionally accessible film; on the other hand one misses the unpredictable contrariness of Diaz's Dostoevskian characters--the way for example Fabian would cunningly evade capture in Norte while simultaneously demolishing various aspects of his life, especially (and horrifyingly) his relationship with his sister Hoda.

Diaz hooks you in early--about the first hour or so--pulling you along on a strange not altogether unfunny ride. Horacia travels to a tiny town in the northern province of La Union (actually Calapan, capital of the more southern Oriental Mindoro province and Ms. Santos' hometown) where her former lover Rodrigo Trinidad (Michael de Mesa) still lives: according to Petra, Rodrigo couldn't accept his beloved marrying another man, and in retaliation arranged to have Horacia arrested and imprisoned.

As in Tolstoy's story, Horacia's incarceration is arguably the best thing that ever happened to her: in prison she tutors the convicts' children, and she's taken to writing highflown almost poetic prose under the pseudonym 'Bahaghari Timog' (Diaz's onetime alias) excerpts from which she reads to her quietly attentive fellow inmates. Outside of prison and in Rodrigo's town she (unlike most Diaz protagonists) immerses herself in community affairs: takes over the managing of a ramshackle carinderia (a small-town diner), helps Kuba (Nonie Buencamino) sell his balut (fertilized duck eggs) to a family of starving children and--most vividly--adopts and cares for Hollanda (John Lloyd Cruz) a dangerously wayward transgendered lost soul.

But as with Norte where Diaz wasn't content to follow Dostoevsky's game plan, neither does he completely follow Tolstoy's: at night Horacia dons denims shirt cap and surreptitiously gathers intelligence about Rodrigo, his whereabouts and his movements; she also at one point asks where to buy a gun. "I don't care if it's homemade," she adds, "as long as it works."

The film--as are all of Diaz's films, though audiences don't always realize this--is sprinkled with a judicious helping of the director's deadpan humor. Buencamino's Kuba is the most overtly comic: at one point running into Horacia standing at a street corner he compares her to Batman: "You show up in the dark, get lost in the dark," he explains. "I really am a creature of the dark," is her deadpan reply. Early critics express impatience with this middle portion of Diaz's film, a kind of slow-moving Fellini circus filled with small-scale eccentrics, but I thought this the very meat of the picture--the point where Diaz carefully establishes how his community interacts with Horacia, and vice versa.

It's a strange kind of interaction; Horacia is benefactor by day avenger by night, a combination of Tolstoy, Victor Hugo, Bob Kane. Can a woman embody so many contradictions? Dostoevsky (and Diaz in most of his works) would say yes I suspect, would in fact point up the drama of her disparities; Tolstoy would add the observation that a woman responds according to how that specific section of society treats her--with scorn, with fear, with skepticism affection desperation.

Charo Santos' Horacia (her first feature film performance in  seventeen years, after serving seven of those years as president and CEO of television and film conglomerate ABS-CBN Corporation) is arguably her biggest most complex role. O I loved her in the Mike de Leon masterpiece Kisapmata (Blink of an Eye, 1981) where she played the one live wire of a woman defying the film's oppressive patriarchal atmosphere--but there she was often overshadowed by Vic Silayan's towering performance as family dictator; here Diaz gives her her due as a smart subtle actor. Diaz doesn't do close-ups (screen actors don't usually register well in his films) but Ms. Santos sans any theater training seems able to convey mood and attitude through body language: insouciant street smarts with a careless lamppost-leaning shoulder, absolute despair with a painfully bowed and shuddering back. She also manages a credible wristlock--which makes sense considering the character's prison background, but did the actor ever study martial arts? She had a few impressive moves.

The other cast members do very well, but Michael de Mesa is a standout. His Rodrigo Trinidad has the low-key magnetism of a lounging panther; even when greeting his grandchildren you sense the menace held in careful check. When he ropes a parish priest into a theological discussion (Is there a God?) the moment and question recall the final scene in Mario O'Hara's Tatlong Taong Walang Diyos--but where O'Hara ends the discussion with an image of understated transcendence Diaz ends on a more stylish cynical note: Rodrigo chuckles, slides on his coolest-in-the-world shades, stands and walks quietly away.

Then there's Cruz's Hollanda--Dostoevsky at his most outrageous, with cross-dressing. When we meet her she's just collapsed in a violent seizure (she's afflicted with epilepsy, the Russian writer's favorite mental illness) but more than her occasional short-circuits or habitual streetwalking or chronic homelessness it's her deathwish that gives Horacia the most grief. Hollanda (a reference to Amsterdam's red-light district?) doesn't seem to know where she wants to go or what she wants to do, doesn't even seem to know what she wants. No strike that; something inside did guide her tottering and bleeding to Horacia's doorstep).

Diaz grants Hollanda the most memorable final scene in the film--arguably the most memorable in any of his films (skip this paragraph if you plan to see the picture!): sitting in an interrogation room she gives the police officer a beautifully sardonic smile, pulls out her breast pads, puts on lipstick, stands up to adjust her amply bulging crotch. Was the moment an attempt to unmask herself? Then why put on lipstick? Was it an attempt to put on a persona? Then why yank her breast pads? And what was that crotch-flashing? Call it Dostoevsky for the new millennium, bizarre behavior that touches the waywardly performatively perverse in us.

Would also like to note the black-and-white cinematography. Ever since Enkantos Diaz has apparently been working in earnest on his monochromatic lighting and camerawork, and from Hele and this picture we see the fruits of his efforts: slightly canted setups that give the camera an equivalently skewed view of even the most mundane conversations (as in: never trust what they're saying, there's always an angle in there somewhere), a digital clarity that reflects the filmmaker's unrelenting gaze, and brilliant flares that lend his imagery considerable moment, not to mention foreboding.

And Diaz may not have intended this but the story does at first blush read like a commentary on contemporary Filipino politics: the kidnappings we hear on radio evoke the extrajudicial killings dominating today's Filipino headlines (main difference being the kidnappers then preyed on the rich, the killers now on the poor); Rodrigo's (is there a more appropriate first name?) prosecution of Horacia recalls the present president's harsh (and unapologetically sexist) treatment of one of his fiercest critics, a particularly determined Filipina senator.

The film's climax (skip the rest of this paragraph too, if you plan to see the picture!) rings ironic variations on Tolstoy's themes: where in Tolstoy goodness is the criterion by which God decides to award His infinite blessing, in Diaz goodness is the weapon by which Horacia is able to achieve revenge. This ultimate fulfillment of genre convention (a woman's vengeance) is further subverted by Diaz's complete departure from Tolstoy: Horacia finds neither satisfaction nor fulfillment at the end of her quest. Instead of a vision of divine forgiveness Diaz gives us bitter resignation; instead of a heavenly choir singing holy approval in the background (as is traditional with most Hollywood productions) he gives us an unmelodical image of circularity repetition perhaps madness or despair. 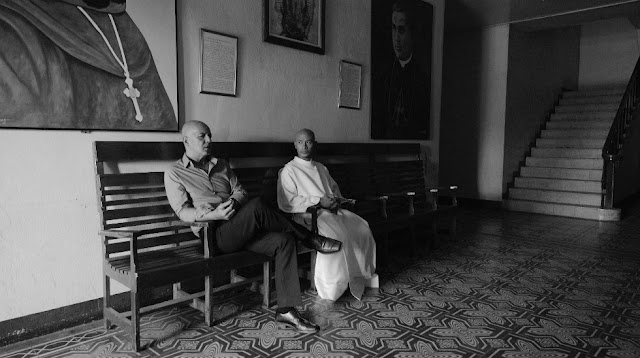 Thanks for the spoilers. They made me itch to see the movie more.

I give fair warning before revealing any plot details.