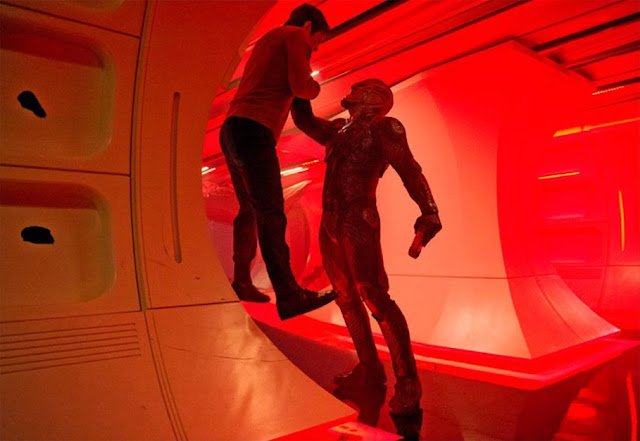 The past and the spurious

Trek is dead; long live Trek. Early in this latest movie Spock (Zachary Quinto playing the emo version) gazes at the picture of his dead alternate-universe self (the more equanimous Leonard Nimoy) and ponders mortality, the past, probably the future.

That's the ostensible impulse that drives the characters in this the third installment of the new reboot: the crew of the USS Enterprise have done three of their five-year voyage and are suffering a midlife crisis (despite looking not quite old enough to shave), wondering what to do with themselves. Kirk (Chris Pine) is eying the admiral's chair; Spock is thinking of restoring the Vulcan population--tall order considering he's probably one of the few of the species left capable of breeding. His biological clock's ticking; he better get started.

Getting in the way is Krall, played by one of the best actors working in movies today only you probably wouldn't recognize him with all the latex and heavy makeup. When relating the appearance of onscreen Trek adversaries to their comparative villainy, it isn't a one-to-one correspondence: Benedict Cumberbatch wore a lighter-than-usual pigmentation when playing Khan and achieved an eerie preternatural stillness; Eric Bana wore heavy eyeliner as Nero and not much else but also didn't do much else (barely remember him or the movie to be honest). Ricardo Montalban played it smartest, relying on his outsized pecs (honorary cleavage if you like) and outsized personality to breathe a touch of grandeur into the original Khan.

Nowadays--I don't know. Krall as it turns out nurses complex motivations and a tragic backstory but feels recycled; come to think of it all of Trek's recent villains (not including the obvious example) feel recycled. Like Nero he has a Khan-like lust for revenge; like Khan he's been abandoned in a desolate planet for years (if anything the least Khan-like of them all is oddly enough Cumberbatch, who instead seems to be channeling Anthony Hopkins from Silence of the Lambs).

Along the way couldn't the writers give the man a memorable moment or two, a memorable line or two? "He tasks me; he tasks me and I shall have him. I'll chase him round the Moons of Nibia and round the Antares Maelstrom and round Perdition's Flames before I give him up." Now that's obsessive megalomania; poor Stringer--sorry, Krall--I can barely understand, much less feel sorry for, much less be intimidated by.

I said 'recycled;' might as well note that along with secondhand antagonist the reboot has come up with a handful of freshly-minted cliches (as in 'they're freshly minted and already feel like cliches'): the running in a spiral down a gravitationally fluctuating hallway; the starship plummeting below cliffside/cloudlevel/treeline only to leap triumphantly at the screen; the jumping aside in time to avoid an expanding fireball (come to think of it the last was already tired back when they overdid it in the Die Hard movies)--O and the Enterprise blown up for the umpteenth time (Kirk must be real popular at the Federation shipyards).

The rest of the movie is pretext for the beloved Trek crew to break into more manageable subgroups to discuss specific topics, and this I suppose is the highlight of the picture: Spock and McCoy (an amusingly urbane Karl Urban) find out that yes, they can do without Kirk and yes, they do harbor a grudging affection for each other; Uhura (Zoey Saldana) can kick ass reasonably well, though not as well apparently as Rey--sorry, Jaylah (Sofia Boutella)--a zigzag-faced paleskinned alien with good martial-arts chops and mildly discombobulated diction. Simon Pegg as Scotty gets to squire the cute new alien around, not to mention give himself a larger share of the best lines; Sulu (John Cho) and Chekov (the late Anton Yetlsin) are colorful background detail, and helpful team members when circumstances call for it.

To his credit Justin Lin of the Fast and Furious series manages to slow his crash-and-careen style enough to allow us to enjoy these character moments; otherwise when someone is chasing or punching or kicking someone the cutting and camerawork is so frenetic you can't tell who's hitting who where and why. Do I want to pick up Wrath of Khan to bludgeon this latest Trek sequel over the head with yet again? Why yes; yes I do--Nicholas Meyer possibly took one look at Star Wars's WW2 aerial dogfighting style, muttered:"not for me," and decided to draw on older war imagery. His ships turn and maneuver like classic winddriven Spanish galleons, tacking against the interstellar wind if you like, trying to outfight the adversary with cunning tricks and deceptions. He knew the value of coherent action--who is doing what to whom and why--and guessed (correctly in my book) that audiences (especially today's ADHD generation) would respond to the novelty of watching a quietly initiated gambit play out, without shaky-cam or shock editing, in real time on the big screen.

By picture's end (skip this paragraph if you plan to see the movie) the crew reunites stronger in resolve than before and Lin goes back into fast and confucious mode; the enemy is defeated partly through quick thinking and partly through the same gambit Tim Burton used in Mars Attacks! only with a straight face (think Burton did it better, capping a silly film and its even sillier aliens with a deservedly silly resolution). Krall's army suggests the frightening nihilism of Middle Eastern extremists--and in fact those swarming little ships suggest the terror of a mighty civilization surrounded by endless suicide bombers, the former's complacency (represented by Starbase Yorktown's fragile-looking air bubble) to be protected from violation at all costs. If the filmmakers sought to evoke that metaphor they don't extend it very far though; you don't beat independently operating terror cells (who emerge from and melt back into the general population at will) by assuming they're controlled by an easily disrupted radio signal--but I forget that this is the Trek reboot, and they're in the business of pushing Star Wars-style science fantasy (as opposed to Gene Rodenberry-style science fiction) now.

By picture's end Spock gazes at a second picture, of the original series' cast photo (wearing uniforms first introduced in Wrath of Khan (it's as if Robert Wise's lumbering 2001 wannabe never happened)). A defining moment I suppose; the older actors have passed the baton (some of them literally) and the newer actors are running with it (despite one or two stumbles along the way). Old Trek is dead for better or worse, mostly worse; long live new Trek, hurrah hurrah.