Nausicaa of the Valley of the Wind (Hayao Miyazaki) 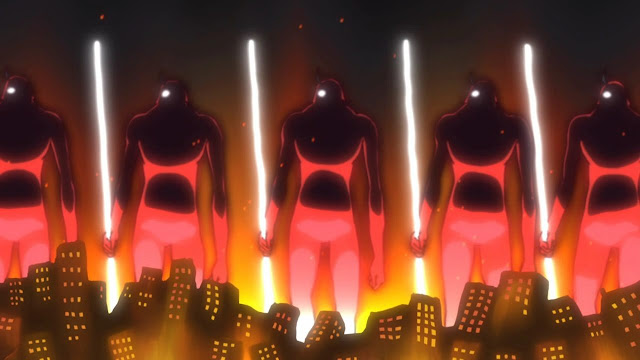 The greatest Disney film ever released

Miyazaki's Nausicaa of the Valley of the Wind (Kaze no tani no Naushika, 1984) was based on his thousand-page manga, first published in Animage magazine from 1982 to 1996. He'd been asked by Animage's publishing company Tokuma Shonen to do a feature anime project and offered two proposals, both of which Tokuma rejected: neither was from a successful manga with an existing audience, a prerequisite for raising the big money needed. Miyazaki agreed to draw a manga instead, under the condition that it not be made into a film (he reportedly felt he wanted to express things in the manga that he couldn't onscreen).


I think this shows. The manga--about a princess from a tiny kingdom struggling to survive a postapocalyptic wasteland--is an exposition of Miyazaki's ideas on man and his knotty relationship with the environment, ideas that evolved as the story progressed. I call it a major achievement in science fiction literature--especially environmental science fiction, a far less prolific genre especially at the time--and a not unmoving work. The film is a necessarily condensed, simplified, not quite successful version (Princess Kushana--Nausicaa's dark double--has been coarsened into an insect-hating warmonger; Nausicaa reveals far less of her grimmer more calculating side than is seen later in the manga).

Which matters less than one might think; the film is an imperfect adaptation of the manga, yes, but still skillfully done--events and characters are ruthlessly altered or cut out, and out of the different unraveled threads an integral and satisfying climax is woven. If it feels overstuffed, if there's almost too much to absorb, that contributes to its larger-than-life feel--the sense that the film is part of a larger narrative as suggested by the gorgeous tapestry that begins the film, and by the evocative images that play behind the end credits (including the lovely image of a shoot sprouting from Nausicaa's abandoned cowl--a symbol of hope for most, though I see a more ambiguous meaning*).

*(The sprout represents life of course, but the abandoned cowl? Miyazaki has insisted on this in all his films, throughout the manga, and in Princess Mononoke, his first feature after finishing the manga: life emerges from death and comes back to death. The cowl I believe is a foreshadowing, that Nausicaa herself will one day end, that life will emerge from her decaying form, and all else follows this dance and cycle)

What the printed page lacks is cinematic flow--manga scholar and translator Frederik Schodt notes the emphasis on narrative over visual sequences (in this the work more closely resembles French comics); manga artist Kentaro Takekuma points out how human figures are often lost in the intricate backgrounds, at least in early issues. If the manga feels like a first draft artwise, the film feels like a fulfillment of that draft, with added touches that send a thrill up one's spine--a reflection of Nausicaa's glider sliding across an Ohmu's glazed blue eye (the blue deepens as the creature wakes up); the awe-inspiring way the Ohmu's sectioned length stretches across the desert (Miyazaki used overlapping cards, a technique he would re-use to animate Howl's castle); the many flying sequences with Nausicaa's glider acting like an extension of her body--her angel's wings, so to speak (Miyazaki would make the metaphor explicit in the short On Your Mark, his music-video farewell to the princess); the (as animator Chris Lanier points out) lyrical, almost hypnotic pace of the underground caverns scene. The manga for its ideas, the film for its images; both make a lovely pair.

Film and manga turn on a clever reversal, as Lanier points out: Miyazaki has upended the order of the world, with beetles and centipedes and worms and spores blown up to nightmare size, breathing toxic fumes while we scurry helplessly out of their way.

But Miyazaki's concept is more than just cautionary: the heroine does more than survive and fight--she explores, experiments, extrapolates. When we first see her she's collecting spores; later we learn she's developed specific conclusions regarding the plants and their deadly fumes--given pure air and soil and water, they cease to be toxic--but hasn't divined the reason why (that comes later).

This is what makes Nausicaa science fiction, even more than its premise. Easy enough to think of a tomorrow immersed in one science-fictional device or another (alien invasion; robot economy; parallel dimension)--intelligent SF cinema asks why things are, not just what or how (Kubrick's somewhat overrated 2001 attempts this, only the director kept most of his speculations to himself while the audience was left playing a confused game of 'twenty questions'). Nausicaa learns that the ecology of her world is exactly that, an ecology, a system of interlocked forces--a demonstrably comprehensible system if you take the time to listen and observe.

Science fiction in film and literature tends to use cardboard characters. I've mentioned Kushana, but putting aside the print original she's actually quite complex--bitter over her horrible mutilations, she responds with a wry smile as if saying: "this is bad, but I've been through worse." And there's the hint of a questing soul in her, of someone who also asks why; it's presumably this part that responds to Nausicaa, seeking to (as she puts it) "get to know her better." 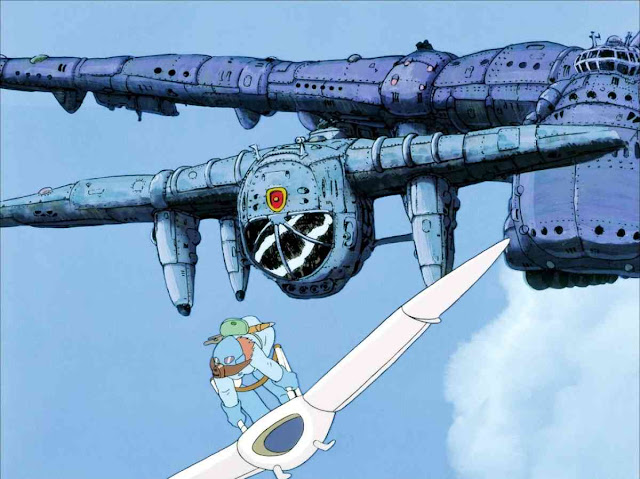 Nausicaa herself seems like your basic good-girl heroine, but there are cracks in the facade: when she and Asbel visit the devastation wreaked on Pejite by an Ohmu attack his response is to lament the once-magnificent buildings, hers to lament the dead Ohmu. She's shown time and time again that she's a caring, loving person cared for and loved in return (also the hardest-working princess ever, fixing up her subjects' windmill blades and finding Ohmu armor to turn into windshields for their aircraft--a real micromanager), but her Ohmu remark, the seeming unconcern for the recent dead, is chilling; it suggests implications in the way she views the world that we haven't fully grasped.

There's also an intriguing single-mindedness to her--when Asbel suggests that the poisoned wastelands need to be contained she accuses him of thinking like the Torumekians (who seek to control and conquer, not understand); when he responds hotly that they aren't the least bit alike, she reminds him that tomorrow will be a long day and they need rest. Later when she flings the same accusation at Asbel's folk they ask, not unjustly, how should they respond to Torumekian aggression--live as slaves?

Nausicaa shakes the question aside. She seems to talk on a different level from other people--not necessarily superior just different, in a manner perhaps the creatures of the poisoned forest might better understand. For all her humanity there's something insectlike about her; you might say she's Miyazaki's idea of how a real angel might act--full of high-flown ideals that can be mistaken for innocence, and an appreciation of the big picture that isn't always aligned with merely human interests.

Beyond the intelligence or complexity Nausicaa has an emotional intensity few science-fiction films can touch. If Nausicaa at times seems remote and even disingenuous in her replies, most of the time she's enchanting--the kind of youth who can inspire you into sacrificing your life, knowing full well she'll do the same for you (in the manga we see this demonstrated again and again, often violently). It's a concentrated selflessness seen in few other films--Kurosawa's Red Beard and Ikiru come to mind--and it both warms the heart and chills the soul. Can the fanatic adoration she inspires be an entirely good thing? Can she perhaps be wrong, only we're too much in love to question her decisionmaking? The manga develops this theme further, but I find it startling to see Miyazaki suggesting as much onscreen.

Nausicaa has been considered Miyazaki's masterpiece for so long it's become fashionable to put it down--to poke thematic, narrative and logical holes in it, to laugh at its seeming naivete. Watching it again on this gloriously clean Blu-ray should dispel most doubts--this is a deft distillation of an ambitious epic, a vivid (yet subtly complex) portrait of a sainted heroine, one of the greatest science fiction films ever made, and the best that Disney--whose recent output looks malodorously small-minded in comparison--has ever released. 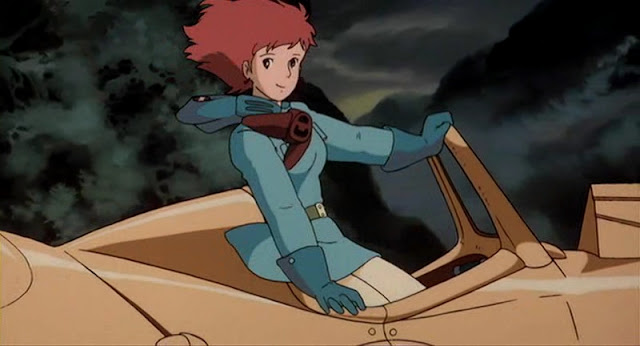 There's a lot to say here. Mainly, the "overlapping cards" you spoke of re the Ohmu is an animation technique called "multiplaning"; its use goes all the way back to Disney's "Fantasia", and it was used in the Sanrio-backed feature anime "Legend of Sirius", a/k/a "Sea Prince and the Fire Child".

I think the manga is so radically different from the movie that you could say they are two different stories staged in the same world. I think some of the problems you mentioned resulted because the manga was not finished when the movie was released. I realize your blog is for criticizing, but do you like Nausicaa? Is there anything imparticular you like about the story?

Sorry for the spotty writing, I woke up halfway through the night, checked my email, saw the Nausicaa review, had to come straight here. If you don't mind, I'm going to go back to sleep now.

Patrick: multiplaning is not quite the same--mainly a way of creating the illusion of depth. Miyazaki does use a similar technique not to depict background but a moving creature.

miniluigi: I see the problems as limits of the medium, and circumstances. Can't really help them, in effect, and I submit Miyazaki worked around them superbly.

I'd say the article expressed what I feel about Nausicaa as clearly as anything you'll find online.