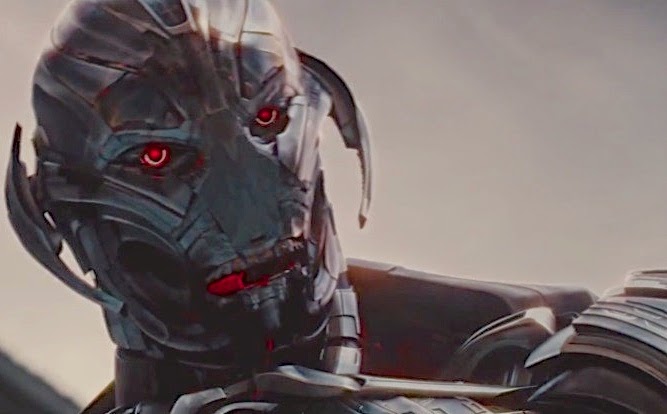 Call me seduced by expensive corporate product, but I liked Joss Whedon's Avengers: Age of Ultron. Forget that it costs an estimated quarter of a billion (all that money and not even a glimpse of decent shawarma!); forget that it ties up and partly resolves the plotlines of a TV show and three smaller franchises, setting up at the same time the premise for the next two direct sequels and sequels for aforementioned franchises; forget that it features the latest in (largely unpersuasive) digital effects and (somewhat poorly staged) 3D filmmaking--I went because, well, it's Whedon's latest. Watched mainly for the quips and the dialogue, folks, and his deft way with oddly idealistic drama, just like the previous picture.

This promises a decent collection of witticisms, from the actionpacked opening ("Guys stop, we got to talk this through--good talk!" "...no it wasn't...") to an inspired little moment where various folk try to lift Thor's magically anchored hammer ("If I lift it do I get to rule Asgard?" "Yes of course." "I will be fair but firmly cruel.") to a SHIELD agent adressing Stark ("All set up, boss." "Actually he's the boss--I just pay for everything and design everything, make everyone look cooler.").

Better than the quips though--which travel only so far--are the relationships Whedon builds on, having already introduced the characters in the first picture. Hence the testosteral three-way between Thor, Stark, and Steve Rogers, where they continually try to both one-up ("This could have been avoided if you hadn't played with something you don't understand--" "I'm sorry, I think it's funny; I think it's a hoot that you don't get why we need this!" "Tony, maybe this might not be the time--" "Really? That's it? You just roll over and show your belly every time somebody snarls?") and stroke one another ("--how do we cope with something like that?" "Together." "We'll lose." "We do that together too."). It's like having old friends back, learning they're still unregenerate adolescents, loving them anyway for the troubles they undergo and lessons they learn this time around.

Natasha finds herself falling for the Big Guy; Banner finds himself unaccountably trying to talk her out of it, with satisfyingly inconclusive results ("I can't have this, any of this. There is no place on Earth I can go where I'm not a monster--" "--you think you're the only monster on the team?"). The delicately blossoming attraction between the two is one of the more intriguing grace notes in a rather lumpy, overstuffed film, especially the quiet scene where Natasha does this little trick with her hand to calm the Hulk ("Hey Big Guy! Sun's getting real low--"). Clint Barton, whose Hawkeye's relative powerlessness is turned into an (actually quite funny) running gag, proves most invaluable of all: when the team's morale is down and Ultron ascendant, he picks up his comrades and brings them to shelter. Clint and Natasha may be low on superpowers, but they do function as touchstone reminders of what the team's fighting for, as folk that provide the human--our--perspective (as the Doctor at one points says to one of his many companions: "There’s a lot of things you need to get across this universe. Warp drive; wormhole refractors. You know the thing you need most of all? You need a hand to hold.").

Folks complain that Ultron isn't as villainously powerful as he's made out to be in the ad campaign. I wouldn't know; for someone able to subvert two enhanced talents to his cause and not so much hurt Earth's Mightiest Heroes as sap them of the will to fight, he doesn't do too bad (Loki in the first picture does something similar, but they weren't a team then). He glowers well--the two tiny lights burning steadily in his deepset eyesockets recall the red lights in the HAL 9000 computer's video camera--but best of all is James Spader's suave insinuating voice: you don't know if he's about to kill you or bend you over his office desk, paddle raised and ready (Fifty Shades of Steel, anyone?).

Overall, I'd say Whedon set out to do what he intended: a sequel not necessarily bigger but (hopefully) better, at the very least different. He's sent various characters spinning off in different directions, and (better yet) made you care they've gone that way. And he's done it all while sorting out and keeping consistent the various threads of this rather ridiculous little weave they call a universe (Universe? Hah. Check out Doctor Who if you want a universe--consistency being a second priority, mind, to telling a good story--).

Best film of the year? Hell no; wouldn't call it the best about artificial intelligence--that honor I'd say goes to Alex Garland's Ex Machina, not necessarily a profound meditation on the subject, but sexy wicked fun. Not the best comic book adaptation (Sam Raimi; Guillermo del Toro; Tim Burton) nor the funniest, but better than the average popcorn spectacle...which isn't saying much but is saying something. Meanwhile, back to our original programming-- The scenes that stand out for me in the movie: (1) the farmhouse sequence, (2) the Nat-Bruce love story, (3) the Ultron-Scarlet exchange, where Ultron unexpectedly told Scarlet to leave or she'll die when the town literally falls from the sky, and Scarlet in turn literally rips out his heart to show how she felt losing someone she loves. In the farmhouse, there's a scene where Steve Rogers pauses before going in, suddenly remembering Peggy and the family that he could have started with her. The farmhouse also framed the scene where Bruce tells Nat he should leave, and Nat replies, "What makes you think I'll stay?' (4) Yet another scene has Hawkeye's wife telling him it worries her that the Avengers, most of whom are like gods to her, need him. These moments (and others like them) weigh more than the explosions combined. In a recent interview, by the way, Joss Whedon revealed that the studio execs wanted the farmhouse sequence removed, but Joss fought to have it intact.

Ha, figures. The farmhouse is what made the film for me. In the latest Transformers flick Michael Bay had a farmhouse too. Blew it up in a series of gigantic explosions.