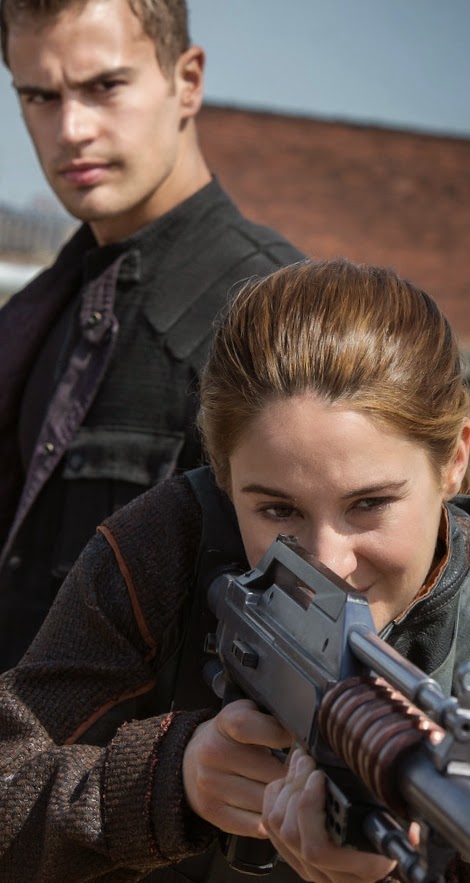 Hunger Games with extra cheese and a side of onions

If you accused Divergent of being The Hunger Games sans J. Law, you'd be mostly right.

I do appreciate that they set most of the picture in the crumbling ruins of Chicago--after two Games, I was suffering from a serious case of jungle rot itch. Where Games involved a lot of sneaking around in largely undistinguished green, Divergent is a collection of dizzyingly vertiginous drops, in the rough shape of tall (and vaguely recognizable) Windy City structures. Not recommend for the agoraphobic; the rest of us are enjoying the view.

Also appreciate that heroine Tris is played by Shailene Woodley, who isn't an obvious knockout beauty in the Lawrence mode--there's room to suss her out, learn her moods and way of thinking, be surprised at her responses and clever choices. Happy that unlike Lawrence's Katniss, who in her first two movies seems to be playing a game of Musical Chairs between her two admirers, here we have a nice little love story percolating; not so happy that the boy involved seems so extravagantly pretty--but hey, the filmmakers must know their key audience, right? Right? Right?


Neil Burger, who came up with the eccentrically entertaining performance drug thriller Limitless and the sharply plotted (and surprisingly poignant) period thriller The Illusionist  (his I'd say best work to date) does manage a few nifty sequences--Tris' friends climb an elevated rail, to hitch a ride on a passing train; Tris is injected with a fear drug, then in a memorable sequence suffers several of her worse nightmares at once; at the end of one challenge (easily the picture's single most spectacular sequence, even if most of it is CGI) she ziplines a few thousand feet to an alley below.

Unfortunately Burger is dealing with an adaptation from a Young Adult book, and as it turns out, these books are more severely restricted than their heroines. They start with a strong,  almost always attractive protagonist who must rise up and overthrow the established order; the characterization is cookie-cutter, the dialogue largely free of wit, the prose barely serviceable. Whether he or she is named Harry, or Katniss or Tris, the anguish experienced is all too easily kissed away--either there's a prophecy of a special destiny, or a revolutionary group interested in one's special status, or some unspecified genetic predisposition to be different ("aptitude test" being a more scientific term for 'Sorting Hat"). The kids' miseries are only temporary because, underneath it all they're really special; that said, read enough of these books and watch enough of these movies and they start looking anything but.

The prophecies, the super powers, the nightmare world as metaphor for a nightmare youth--it's been done, and better. To his credit Joss Whedon (and his stable of writers) also whip up snappy dialogue and the occasional ingenious storyline, all the while displaying--literally--a killer instinct for disposing beloved characters, whoever or whenever it suited them.

In the meantime we have Burger selling his soul to direct a possibly popular franchise (I think my prediction safe enough: the movie raked in over fifty million dollars in the opening weekend) and not quite making it his own--the plotline is far too familiar (being necessarily faithful to the book), the action sequences wretchedly shot and edited (almost as bad as the first Hunger Games, or worse a Nolan flick). To Burger's credit, he reports bowing out for the second installment--hopefully because he wants his schedule free enough to do something really interesting. 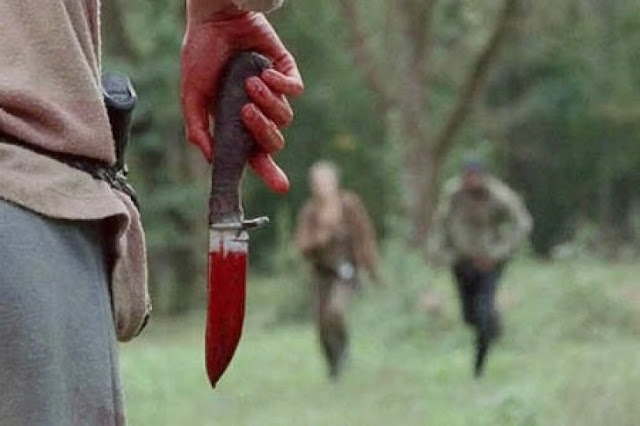 Oh Lizzie--you got some 'splainin to do

Not a huge fan of Robert Kirkman's The Walking Dead comic books--they seem like one long relentless exercise in sadism, disguised as an extended soap opera. The TV series are an improvement--they're better at modulating horror with humanism, though as a friend pointed out none of them (the filmmakers included, apparently) seem to know much about the weapons they're handling, some of the plotlines--not to mention CGI--seem fuzzy, and I miss the pointed wit and sociopolitical commentary of George Romero's films--still my personal gold standard when it comes to the undead.

That said, I've found myself following the series, and I'd say their previous episode The Grove is the finest they've produced yet (also seen the latest episode, and my judgment stands). Some fine ironies working here--the four characters involved (and it's startling to realize it, but for the length of the episode there are only four, plus the baby) arrive at an apparently safe haven, only to find themselves facing something worse than zombies. They have trained and taught each other to deal with every possible external danger, but never really considered internal issues. And they have a serious discussion about staying there, only to pack up and leave by episode's end.

It's fine writing too--so I feel obliged to point out a few minor um inconsistencies (skip the next two paragraphs if you intend to watch the episode): 1) Deer will run when a shot is fired. Oh, I suppose you can put this down to artistic license (emotionally and poetically they do need that deer, plotwise they do need that gunshot), but there could be more spacing-out of the events involved, for verisimilitude's sake; 2) Considering that Lizzie desperately wants what's going to happen to happen, and considering that she'd just heard Carol's position on the issue, it should have been a helluva lot harder getting that gun from her hand. That, or Carol should've tried much harder to convince Lizzie they're on the same side.

That said--well played, Walking Dead. People have pointed out similarities between this and Steinbeck's Of Mice and Men, and I agree for the most part, but think another possible influence is Thomas Hardy's earlier, arguably more horrific Jude the Obscure--in Hardy's case actual children are involved, not just the merely childlike, not to mention the hope for a better afterlife.

It's still not Romero--hell, it isn't even on par with Romero's latest (a kind of postapocalyptic Hatfields and McCoys), but it does achieve a small-scale loveliness all its own, its beauty bordered by a dark fringe of purplish-black madness. Can think of worse ways to spend one's Sunday evening.

"Whether he or she is named Harry, or Katniss or Tris, the anguish experienced is all too easily kissed away--either there's a prophecy of a special destiny, or a revolutionary group interested in one's special status, or some unspecified genetic predisposition to be different." Can't argue with that, though come to think of it, after thousands of years of human civilization, stories do begin to sound familiar. I agree with the film being too Y.A. formulaic though (the pop songs inserted in the movie gives a jarring feeling to the dystopian setting). But I don't think Neil Burger "sold" his soul to make this movie. He knew the material will never become indie-style. I prefer to think of it as Burger influencing the mainstream media, instead of the other way around.

Burger doing coherent action scenes and the girl making the beast with two backs with the guy--I'm not particular with who penetrates who--if the YA audience howled in protest at how he's raped their beloved franchise, maybe I'd be happy. Maybe.

But you liked the zip-line sequence? It was edited too fast for the most part. The touching-the-reflection-on-the-skyscraper-glass thing was cool though (reminded me briefly of Cuaron's Potter film, where the flying beast skims the water surface as it flew). Anyway, I had to google "beast with two backs" before I learned what it meant. Interesting: I'm reading the sequel and in the book (sequel), the author is more suggestive. But hypothetically, does a single sex act ruin an entire movie franchise? Would Europeans react that way, if they were the target audience?

The zipline was middling entertainment.

I'd say a single sex act would've saved this movie, at least. It needed to be dirtier, not more wholesome.

It may work, a less wholesome Divergent. But it would also limit the audience (R or NC-17) and the return on investment. Somehow, a dirtier movie would also be more realistic, hence a less escapist experience.

Exactly. Put less money on the special effects, more on a good script.

Hi. I had to add this to my comments, after I finished reading the trilogy. I almost agreed with you on this one: "Whether he or she is named Harry, or Katniss or Tris, the anguish experienced is all too easily kissed away--either there's a prophecy of a special destiny, or a revolutionary group interested in one's special status, or some unspecified genetic predisposition to be different ("aptitude test" being a more scientific term for 'Sorting Hat"). The kids' miseries are only temporary because, underneath it all they're really special; that said, read enough of these books and watch enough of these movies and they start looking anything but." Actually, once the trilogy gets to the last book, everything that happened before is rendered meaningless. I can't describe it without revealing spoilers, but I'd say it involves genetics and I kept thinking about Gattaca. Also, unlike Harry Potter, Hunger Games, and Twilight, the Divergent trilogy concludes without a crowd-pleasing happily-ever-after closing.

Not holding my breath, though.