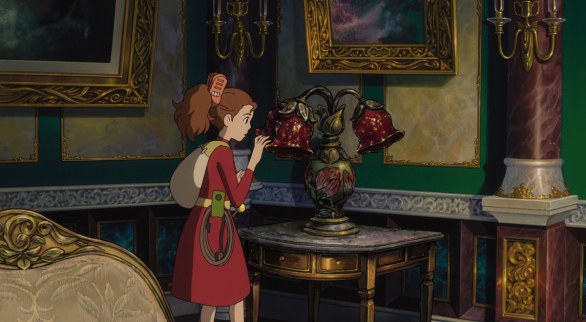 It's a small world, after all

Hiromasa Yonebashi's Kari-gurashino Arietti (The Secret World of Arietty, 2010), Studio Ghibli's adaptation of the popular 1952 Mary Norton novel The Borrowers is, in a word, a wonder. It demonstrates with graceful simplicity the idea that to evoke the fantastic and fabulous, one does not have to push at the boundaries of fantasy and science fiction, of the future and outer space and the fantastic; one can look in the past, in a book roughly sixty years old, and in the otherwise ordinary setting of an old-fashioned suburban home--with one significant twist.

We're introduced to the story through the eyes of Shawn (David Henrie), a boy suffering from a heart condition. He spots the tiny figure--somewhere between three and four inches in height--of Arrietty (voice Bridgit Mendler in the American release), a Borrower living with her family in a makeshift home under the floorboards of Shawn's house, and they become friends.

Borrowers, we eventually learn, are tiny people living in the cracks and crannies of full-sized people's homes. They live off the larger folks' supplies, taking sugar cubes, tissue paper, the odd green pea (it makes for a huge cauldron of soup)--explaining that they are only 'borrowing' these items, with the unspoken promise that said items will be returned or replaced in some later date. Borrowers have an uneasy relationship with the big folk (called 'human beans'--a punnish mispronunciation--by Arrietty's father Pod (Will Arnett)). They depend on them, yet are afraid to reveal themselves to them; when spotted by the beans, the Borrowers' response (to Shawn and Arrietty's dismay) is to pull up roots and move elsewhere.

The film constantly shifts point of view from bean to Borrower, and we can't help but notice each change thanks to a bewildering accumulation of details, the kind the artists of Studio Ghibli are practiced masters at capturing, and bringing to animated life. Water drops, for example--viewed from proportionally smaller eyes and handled by proportionally weaker limbs, water's surface tension seems accordingly stronger, turning them into rubberized orbs that flow and swell strangely, like living tissue. Bean sounds are deeper, sometimes more felt (like earth tremors) than actually heard. A dollhouse's intricately drawn furnishings are shot and lit (see photo above) just so that you're aware the teacups and table lamps are not just Borrower-sized cups and lamps but model replicas of the same, clumsily crafted and hand-painted (and if you look carefully you can see they're hand-painted) by large fingers to fit (however imperfectly) the delicacy of Borrower hands.

It's this attention to detail that allows the film to deliver startling effects, turning what on the surface is a domestic fantasy into grand adventure--a refrigerator door looms like a mountain cliff, a kitchen crossing feels more like an epic trek, a house cat stalks the garden with all the menace of a lumbering T-Rex. Dropping into the dollhouse's kitchen, Arietty gasps, startled to see the world has suddenly shrunk down to her size, and for a moment we're thrown too; then she--and we--look closer and realize our mistake (a mistake painstakingly achieved by the Ghibli background artists).

Mr. Yonebashi seems to have successfully captured Hayao Miyazaki's signature approach at storytelling, presenting the fantastic as if it were everyday, the everyday as if it were fantastic--both a good and bad thing. Good in the sense that Miyazaki, who wrote the script and produced the picture, manages to express himself through proxy--his voice is that strong; bad in the sense that Ghibli still has to find talented directors who can bring something new to the studio, who can eventually replace its two animation legends--Miyazaki and fellow filmmaker Isao Takahata (Hotaru no Haka (Grave of the Fireflies, 1988)). Miyazaki's son Goro struggled against his father's influence in Gendo Senki (Tales from Earthsea, 2006) and the result is an unhappy compromise between the two filmmakers (in a way the story--the uneasy relationship between a young prince and a master wizard--seems to reflect the tension between father and son). Arguably the most successful non-Miyazaki, non-Takahata Ghibli film is Mimi o Sumaseba (Whispers of the Heart), by Yoshifumi Kondo, which manages to evoke the Ghibli spirit while retaining its own distinct look and lighthearted romantic-comedy feel--but Kondo died soon after (this was his only feature), and the film was released way back in 1995.

Yonebashi's work does do one thing--bring attention to some of the more progressive ideas implicit in Norton's novel. Miyazaki and Takahata have often expressed left-leaning sentiments in their films, and Miyazaki himself once dabbled in Marxism; the Borrowers' idea of 'borrowing' material from the beans--a variation on the idea of 'redistribution of wealth'--must appeal greatly to Miyazaki. Without undue emphasis, and by simply allowing the story to unfold, Yonebashi makes us aware that the Borrowers are in a way physically challenged folk; not lazy or especially passive but honest, courageous, naturally humble and reserved (save for Arrietty--her rich cascade of red hair suggests a more confrontational spirit) who cannot survive without resorting to desperate, even humiliating, measures. They have needs, they take what they need--not arrogantly, in the spirit of Spanish conquistadors but quietly, in the spirit of Deuteronomy's gleaners, and only what's necessary; all that's really missing is the beans' acceptance of their miniscule co-habitants (which in the course of the picture is, briefly and to a limited extent, achieved). Like what's missing in today's world (and here is where Yonebashi's film achieves some measure of relevance, of urgency even) is the one percent's acceptance of the yawning need of the ninety-nine, and perhaps a touch of everyday human compassion...

Loved Arrietty; think it's a superb adaptation of a lovely little fantasy--perhaps better than the magnificently flawed earlier attempt at adapting a far more ambitious one--and ultimately more emotionally satisfying. The film shows some hope for the future for Studio Ghibli which, after all is said and done, is probably the finest animation outfit now working. 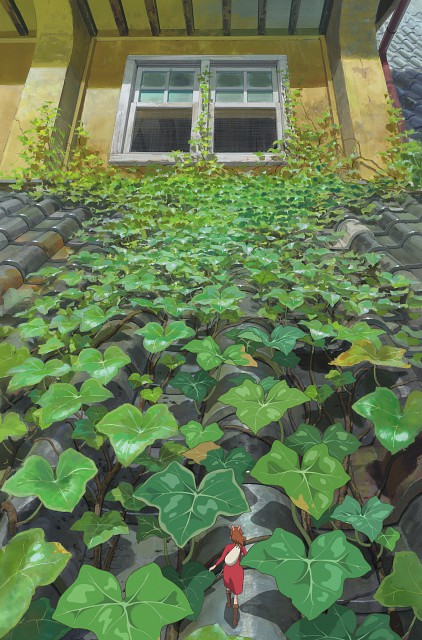 It took forever for Arietty to be released in the U.S. I saw it last year and my 2-1/2 year old daughter's been watching it obsessively these last few months in Japanese. Thanks to the Blu-Ray release I can laugh at the name changes ('Sho' to 'Shawn'?) that subbing invariably brings. I want to ask a possible plot loophole. The housemaid takes the houseowner to the Borrower house, but all they see is an old pile of trash. When did Sho (or Shawn for you) find the time to move or hide the entire house? All we saw before that was Sho bringing the miniature kitchen back to the doll house.
Another thing. Do you remember Watership Down? The Lendri are supposed to have a keen sense of smell, but the badger passes the Borrower family without smelling them. How'd they avoid detection?

I took that as while Sho returned the kitchen, the family broke the house down. Since they're always prepared for the possibility of having to move, the house would be designed to break down easily.

As for the badger--doesn't mean he's infallible. They could be downwind.

nice movie but it is more detailed when you read the book. kudos for Studio Ghibli.