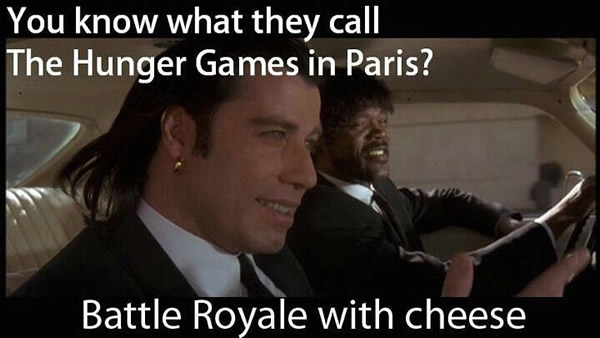 If The Hunger Games were real, Katniss wouldn't have lasted a day, I'd say; maybe not even an hour.

Think about it. She'd been advised beforehand not to try for the Cornucopia at the start of the games--told it'll be a bloodbath, with all the tributes trying for the best weapons and survival backpacks, and she'd be better off running for the high ground, finding water, and making her own bow and arrows. So what's the first thing she does when the starting signal is given?

Goes for a backpack. Nearly gets killed for it, too.

Actually, Katniss nearly gets killed a number of times (have not read the Suzanne Collins book, for the record, so I'm mainly judging the movie) and the only thing that saves her is some last-minute intervention by some other tribute for some complicated reason of his or her own. For someone so highly rated at survival, she seems to need the help of a lot of people.

Plus she needs to work on her short game. She's deadly with arrows we're told over and over again, okay, but arrows are basically long-range weapons and over and over again predators and adversaries find a way to dodge her arrows, and after that--well, it's rescue time again. Doesn't seem all that good with her knife, either; she should try get a machete, or perhaps a spiked club.

And she needs to stay away from rivers or streams. Every time she comes upon a river or stream she insists on walking straight down its middle, instead of sticking to the trees. It's like walking in broad daylight in the middle of a road, dead center, yelling "Shoot me! Shoot me!"

At one point director Gary Ross gives us a giant closeup of Katniss' foot stepping on a dry twig, loudly and crisply snapping said twig into brittle pieces. I'm reminded of an appreciation by Mark Twain of the fiction of James Fenimore Cooper:

"He prized his broken twig above all the rest of his effects, and worked it the hardest. It is a restful chapter in any book of his when somebody doesn't step on a dry twig and alarm all the reds and whites for two hundred yards around. Every time a Cooper person is in peril, and absolute silence is worth four dollars a minute, he is sure to step on a dry twig. There may be a hundred other handier things to step on, but that wouldn't satisfy Cooper. Cooper requires him to turn out and find a dry twig; and if he can't do it, go and borrow one."

(It's with some gratitude that I recall Twain has been dead for over a century now; if he were still writing he'd probably scribble a thorough takedown of The Hunger Games an hour before breakfast and still be three times funnier than any critic out there)

But that's Katniss' skills (or lack thereof) as a gamer; director Ross doesn't do much better. His idea of effective filmmaking seems to go something like this: 1) glance at the script; 2) note instruction: "FIGHT SEQUENCE;" 3) shake camera as if it had fallen asleep; 4) repeat.

He's incredibly consistent on this; you might almost call it a virtue if it wasn't so damn annoying. And I'm sure it's more than just a knee-jerk reaction on his part--thinks this way he can avoid the dreaded "R" rating (the MPAA can't slap the rating on him if they can't see what's going on, can they?). Poor soul doesn't seem to realize that it's possible to direct an effective action sequence without showing too much blood (see Spielberg's Indiana Jones movies, or even his recent War Horse--not a huge fan of the picture, but it does render something of the horrors of war without ladling on too much tomato sauce; just takes talent, is all).

Or you can go all the way and show the violence for what it is--destructive, wasteful, horrendous--just the way Kinji Fukasaku did in Battle Royale (2001), about a class of fifteen-year-old students kidnapped, brought to a remote island, armed and forced to kill each other.

Have a lot of issues with Fukasaku's film--the melodramatic music; the sticky sentimentalism; the rather muddled plot logic (why would parents even allow their kids on field trips if they know this could happen (or do they know? It's never made all that clear...)). One thing Fukasaku does do well is violence--gallons of it, from the knife sprouting out of a student's forehead to the various stabbings, shootings, decapitations, to the fireball finale that closes the picture. Fukasaku's camera is pitiless; it neither flinches nor shakes. You know exactly what's happening, to whom it's happening to, and why.

No such luck with The Hunger Games; the camera may linger on Katniss (an unconvincingly well-nourished Jennifer Lawrence) and Peeta (a dewy-eyed and rather limp-looking Josh Hutchinson) sharing a tender moment, but God forbid that they should quarrel! The very idea would send Ross' camera a-quakin'.

(Why am I so concerned with the portrayal of violence? Mainly because I think in most cases violence when depicted should be upsetting, should be repugnant, should not be glamorized or in any way sanitized (if we are glamorizing it, it should be for a purpose--to show the psychological effect of violence's appeal on those who inflict it, and on those inflicted upon. Soft-pedaling violence for the purpose of getting a PG-13--and in effect bigger boxoffice--is in my book hypocrisy of a high order)

In Royale it isn't all about the kids. There's the character of Kitano, former schoolteacher turned competition director, played by--who else?--filmmaker Takeshi Kitano, a multimedia celebrity artist who comes with his own built-in sense of irony. The presentation of violence a two-edged sword? Kitano cheerfully acknowledges this, satirizes it without saying a single explicit word on the subject, and adds an indefinable melancholy tang to the picture. Just his presence alone complicates the film's moral texture; his sad-sack face, the oddly self-conscious scenes involving him (at one point he phones his daughter, who professes to despise him; at another he unveils a painting--which I'm guessing he did himself--that is in itself a commentary on the whole bloody business). Hunger Games has no such self-awareness; its 'satire' consists mainly of cheap shots at reality shows and the electronic media. Thematically the movie is about as substantial as a District 11 dinner.

(Oh, and on the issue of Collins ripping off her ideas from Battle Royale--she can rip off the Bible (which has its own share of violence and murdered youths) for all I care, as long as the result is something honest and at least halfway interesting. Which this isn't.)

What else? The fire forcing Katniss to run towards her opponents is a clumsy idea (in Battle Royale, if you didn't go where they wanted you, the collar round your neck detonated--pow!--and you're an instant raspberry juice fountain); the parachuting gifts beeping--beeping?--their way down is a stupid idea (what's to stop opponents from finding said gift and picking you off as you approach?), and the arbitrary rule changes are an even stupider idea (in Royale (did I mention how much more I prefer that picture?), if on the third day no winner is declared all necklaces detonate).

Big boxoffice success, of course; nothing I or any other nonfan can say will change that (as if  I give a fig). Ross' cachet will only improve (about which prospect I do give a fig); he may be assigned to do the rest of the franchise (frankly I'd like to see Joe Dante take a swing at it; then the satire might acquire real teeth)--in which case, more Hunger movies. Not holding my breath.

Love how you pointed out Kitano's performance's effect on BR.

for the kids, no, Collins is right, Hunger Games is not Battle Royale, it will never be. Why? Because Battle Royale is not a bad piece of literature.

"Hunger Games is not Battle Royale, it will never be. Why? Because Battle Royale is not a bad piece of literature."

I'll take your word for it. I do hear the novel is quite good.

That is, of course, a matter of opinion. Mine is that The Hunger Games trilogy is not only a worthwhile and well-written body of work but one with the beginning of a worthy adaptation. You could certainly make the argument against Battle Royale, as well.

Sorry, I'm not having links to ads or sales pitches. Just not having that.

Considering that Gary Ross is no action director, The Hunger Games managed to hold up pretty well under his direction and will never be mistaken for any of the Twilight movies to which it's unfairly compared with.

But his propensity to develop characters gives the film a longer running time than its intended demographic could tolerate (i.e. more time was devoted to the training sessions when a faster-paced montage would suffice) but by and large, it has remained faithful to the book which may not always be a good thing (yes, I hear you, Ross should have taken more liberties).

For the most part, I actually enjoyed it.

Ross should have cut his cameraman's jugular and stood on the man's neck while he bled to death. This is action filmmaking at its most embarrassing.

Not to mention the corny 'love' story. "Battle Royale with Cheese' indeed.