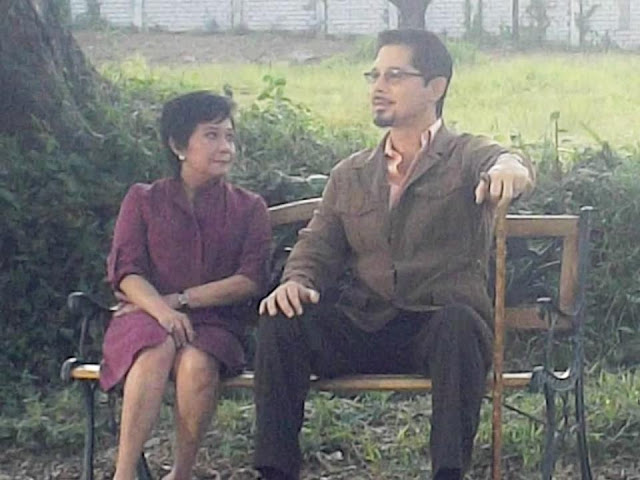 
(With revisions in the 12th, 13th and final paragraphs)

Been a week since Sa Ngalan ng Ina has closed, and have written many an article on the series, but have yet to fully digest the total experience.

Won't stop me from trying.

Did it achieve all that it set out to do? I don't think so. I think it set out to be a groundbreaking teleserye that married recent political mythology (the fall of the Marcos clan and rise of the Aquino clan) to full-blown Filipino melodrama. Along the way the political thread was dropped (at about the time both prodigal children (Alfonso (Alwyn Uytingco) and Andrea (Nadine Samonte)) Deogracias reconciled with their stepmother Elena (Nora Aunor)); villainness Lucia Ilustre (Rosanna Roces) started to focus on extralegal means to exact revenge on Elena; and political figures Apo (Leo Rialp) and Dorinda (Raquel Villavicencio) faded into the background.

It was a pity, I thought; the political element grounded the melodrama, kept it linked not just to everyday reality, but to familiar everyday reality, freshly taken from headlines (the financial scandals; the leaked tape recordings; the deliveries and collection activities of drug gangs). I thought Elena--a naif when it came to political reality and proudly so--was starting to come into her own when she collaborated with her drug-lord stepson. Yes she was making arrests right and left, but this was at the expense of the empire Alfonso had carefully built; if he was to give all that up, he had to have demanded some kind of price, and I would have loved to have known just what (A sum of cash? Concessions to various lucrative but legal activities?).

The reconciliation between Alfonso and Elena was beautifully done, and I as much as said so; I even hoped that despite the noble sentiments expressed Alfonso would struggle with temptation and perhaps experience a relapse, and Elena struggle with the prospect of arresting her son yet another time. But Alfonso's turned out to be a genuine change of heart, even a lasting one; Uytingco remained a consistently fine actor for the rest of the series but didn't ignite the screen the way he did the previous four weeks.

Elena's character suggested bits of ambivalence especially during the third and fourth week; besides running to Alfonso she delivered a particularly menacing threat to an underperforming police officer ("Remember I had my own son arrested--think what I'd do to someone outside my family!"); beyond that, the only indication that she was a less than perfect woman was when she admitted to fathering a child with Pepe Ilustre, played by Christopher De Leon (but then apparently half the women in the Philippines seem to want to do that--why should she be any different?).

Then there was the way Elena broke up Andrea's marriage to Ramoncito--I thought then that that was a masterstroke of hidden puppeteering, the loveliest touch being that Elena meant well, and acted exactly like a concerned, caring mother. But nothing more was made out of it, and Andrea never suspected, apparently; she became and remained till the end of the series a staunch Elena Deogracias supporter (here's to hoping she doesn't read this blog).

It wasn't quite (as I'd hoped at first) the Filipino equivalent of Robert Altman's Tanner '88: too many opportunities missed, too many plot threads simplified instead of rendered more complicated. Elena started out humble, ends up heroic at worst; Alfonso has the dramatic heart ripped out of him when he realized he wasn't eating his Aunt Pacita's humba.

Likewise Lucia--I would have loved to have seen her develop as a character, but then she decides to take the for me least interesting route: jealous housewife gone totally insane. Pretty much tossed her sometimes ingenious manipulation of media and law to the side when she decided to kidnap Elena; after that, her options were strictly limited, more of the Norma Desmond After Shooting Joe Gillis variety ("I'm ready for my closeup, Mr. DeMille!").

The series' great theme, I thought, dealt with establishing boundaries: how one separates politics from family relationships, and vice versa. I had hoped the series would delve deeper into this issue, show how the various figures (Elena, Andrea, Pepe, Lucia, and in retrospect Amang) negotiated this division within their work, within themselves.

Not really; in the final weeks the series devolved into a  struggle between two women (Elena and Lucia) for the love of a good man (Pepe Ilustre). Not a bad struggle to depict, but--it could have been something more (see paragraphs above).

But on that other complementary major theme--that the demands of politics and demands of family are often similar and easy to confuse, even interchange--I have to say the series is a howling success. Andrea and Lucia often personalize politics (Andrea by using her wedding as a promotional gimmick, Lucia by using her husband's emotional infidelity to justify her campaign against Elena), and I suppose it's to the credit of the writers (Dinno Erece, Jerry Gracio, Benedict Mique, Pamela Miras) that you see their gradual influence on Elena, on her eventual personalization of her politics (she bends the rules to forgive Alfonso, she learns to hate Lucia and call her a demon). Should the series have explored this further, shown how Elena may have changed her moral principles? Should there be a scene where someone tells her that she has changed her moral principles? At least one scene of self-examination, where she looks back and ruthlessly criticizes her brief career? Alas, we may never have that scene...

I might add that O'Hara adopted a similar approach in Bagong Hari, where the hero remained mostly heroic despite the darkness and corruption surrounding him. Possibly O'Hara didn't feel this was needed, then or now; that the plot was complex enough without adding complexities in the protagonist's nature. That the politician slowly corrupted by politics is too familiar a story, and what was needed was the story of someone fully engaged in politics but was not corrupted (as Marcos was), nor rendered ineffective by eventual circumstances (as Aquino eventually was). A middle way, if you like, with some necessary compromises made.

While the series largely dropped the politics in favor of melodrama, you had to admit it was superbly told melodrama--fast-paced, mostly understated, in its own observant way truthful. Lucia may have gone nuts, but she never devolves into anything less than human--she constantly touches on her primary motivation for doing what she does, her love of Pepe and daughter Carmela (Karel Marquez), her hatred of Elena (I keep thinking the hate tends to overshadow the love--or is it one face of the same coin?). When Lucia  surrenders to the police, director Jon Red gives her a magnificent send-off scene worthy of (inspired by?) Gloria Swanson's similar scene in Sunset Boulevard. No--this is better; writer-director Billy Wilder had frozen Norma Desmond's face into a Kabuki mask of insanity, with little human left in her (the mask cracks only towards  the end, and only to deliver a final childish cry of totally irrelevant, if passingly poignant, delight).

Rosanna Roces starts out the opposite of frozen, her Lucia broken and alone, utterly defenseless, totally devastated; she looks into the mirror (her only witness) and--this is the magnificent part--somehow finds it in herself to slowly pick up a brush and start building up her face, slowly (in effect) pick up the shattered shards of her life, slowly piece together the ever formidable, endlessly invincible persona she had created for herself: Lucia Ilustre, daughter of a storied political family, wife of the region's former governor, leader of a major drug cartel,  powerful political force.

That's the drama, and excellent drama it is, too. What Mario O'Hara achieves with the Deogracias household (in contrast with the anguish in the Ilustre household) is, if possible even more impressive: he makes everyday happiness seem special. Kidnappings, killings and tortures; hair-pulling, shouting matches and confrontations--that's the very lifeblood of soap operas, what they thrive on. More difficult to do well are scenes of everyday life where nothing more dramatic is happening than, well, eating a meal. If, say, Lucia's surrender is the teleserye equivalent of an episode out of Victor Hugo or Dostoevsky, you might call the scenes in the Deogracias household--especially at this point in the series--the teleserye equivalent of Tolstoy, whose most unique achievement was the depiction of ordinary domestic life.

Nowhere is this better seen than in the shot where the Deogracias' manang (Lilia Cuntapay) is serving lunch. She pauses with the food, looks up, touches the arm of stepson Angelo (Edgar Allan Guzman); he looks in the same direction, touches Alfonso's arm; he looks in turn, touches Andrea's arm; she looks and smiles. The camera, which has been shifting from face to face to face, finally glides past all the faces to find Elena standing at one side of the room dressed in white, easily the first time she has done so in the series. The meaning is never spoken aloud but couldn't be more clear; she has stopped mourning the murder of her husband Amang (Bembol Roco) by Lucia; she's ready to move on.

If Lucia's surrender moves us to pity (for her despair) and admiration (for her strength and dignity), Elena's (which isn't even a scene really, more like a brief shot) moves us ineffably with its simplicity and grace. After all she's been through--after the death of her husband, the stress of election, the strain of running a province, the sharp sting of her stepchildren's ingratitude; after being kidnapped and beaten and tortured in various imaginative ways; after all that, it's almost painful to see Elena in white, smiling her shy Aunor smile, her incomparable eyes twinkling with wordless joy. It's not just happiness it's hard-earned happiness, it's sunshine after what seemed like a month of neverending tears. After going through all that to finally arrive at this we can, perhaps, allow ourselves to respond with a few tears of our own.

That final meeting between Elena and Pepe--I know it's a concession to their fans, to see Nora Aunor and Christopher De Leon at least act out their fantasy of coming back together; it's also the playing out of an even unlikelier fantasy, where two rival political families (the Aquinos and the Marcoses) settle their differences and come together in a harmonious marriage. But I see a third interpretation: of a filmmaker and his acting muse coming together after decades apart, marveling at how they have survived all these years, marveling even more at being given the chance to work together again, and at such a high (if not the highest) level. No, this may not be the ending of our dreams--it doesn't have the teeth, in my book, or the tragic grandeur (I would have liked very much to have some tragic grandeur)--but it is ending enough, a capstone to one of the most memorable collaborations in Philippine cinema...