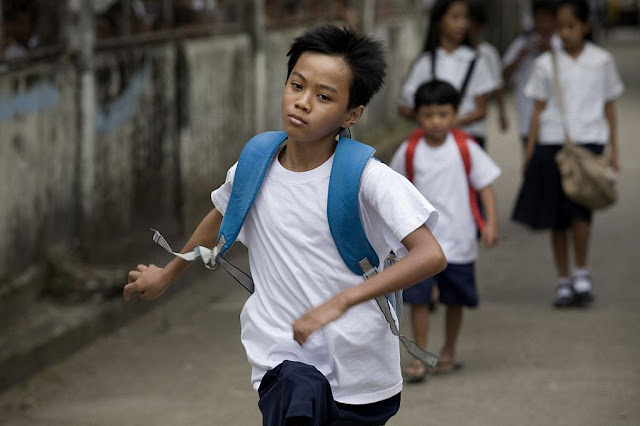 A scene from Lukas Moodysson's Mammoth

Is this the real life? Is this just fantasy?

Cine Europa is on its second weekend at the Shang Cinema, Shangri La Mall in Mandaluyong, and for this year non-realist genres seem well represented.

Case in point: the United Kingdom's Never Let Me Go (Mark Romanek, 2010), an adaptation of the Kazuo Ishiguro novel (using a screenplay by Alex Garland), postulates an alternate-history England very much likenow--dreary buildings, lovely countryside, rustic farmhouses--with only one difference: a caption at film's start explaining that a medical breakthrough in 1952 allows the human lifespan to extend beyond a hundred years. What this breakthrough is, and what the consequences involved, are left unexplained.

Romanek (whose career mostly consists of music videos) takes his cue from Ishiguro and crafts a quiet, leisurely little film about three friends: Ruth, Kathy, and Tommy growing up together in a boarding school, and then a small farm, together. Kathy and Tommy love each other; jealous Ruth steals Tommy away from Kathy. All very bucolic and pleasant except for the occasional odd details that suggests there is more to the film than just Romanek's willfully placid surface: every time the children enter a building they flash badges at a blinking scanner; later a teacher tells them some startling truths about themselves--apparently against protocol, because she's never seen again.

As with Ishiguro, the drama is internal--these children eventually learn of and accept their fate. But what if there's a way out? Through art, perhaps, or love? Like dumb farm animals (is it a coincidence that much of the story takes place in the countryside?) they resignedly fulfill their functions unaware of any alternatives, but faced with even the possibility of a different life they appear upset, even unhappy--more so, one suspects, than if they had been explicitly abused.

How you react to the film pretty much falls into two categories: either you turn off the DVD player and fall asleep, walk out of the theater demanding your money back (unlikely in the latter case, since you spent time and effort to buy the ticket and attend the screening), or you stay till the end, possibly clutching the edge of your armrests in a death grip. The final monologue is perhaps too explicit (it firmly outlines what the film has been quietly suggesting all along), but if--and this is a huge if--the film works for you, the experience is not much different from a frozen icepick sliding silently into your chest.

Spain's entry into the festival, Juan Carlos Fresnadillo's Intacto (Intact, 2001) is cruder, lewder, but a hell of a lot easier to enjoy. Its alternate-universe proposition is that there is an underground economy of psionic talents specializing in probability games--in effect, people who are abnormally lucky. More, some of these people are capable of feeding on the luck of others--are in effect psionic vampires, who can draw your good fortune out of you with a hug and long kiss, or even just a photograph. Fresnadillo directs with shadows and plenty of style--when one man draws another to him you feel dread creeping over you the way it does in some of the better films about the undead (and I don't mean the twinkly kind). The film (written by Fresnadillo with the help of Andres Koppel) focuses too much on the mechanics of lucksucking (I doubt if this neologism will catch on) to fully draw out the various metaphorical and philosophical implications of his premise, but there's enough here to make this a memorable, if not superior, suspense flick. What in no small way helps make the film watchable is Max Von Sydow--at the age of eighty-two (seventy-two when this picture was released) he seems to be enjoying himself as much as he ever did in Ingmar Bergman's films (more, since Bergman is seldom funny, and almost never camp). Here he plays the ultimate lucky gambler, a Holocaust survivor (who else could be so fortunate?), and he does so with quiet humor and humanity (look out for a gem of a little speech he gives late in the movie, about a girl's faded photograph that he keeps in his pocket--he's a monster, but such a sad, charmingly agreeable one!).

I'd seen Lukas Moodysson's Lilya 4-ever (2002) and aside from a few implausibilities was impressed with the filmmaking overall, a kind of casual hand-held lyricism that helped stylize (without softening much) the relentless poverty depicted onscreen.

Representing Sweden, his Mammut (Mammoth, 2010) follows the story of four people: an American couple Leo and Ellen Vidales (Gael Garcia Bernal and Michelle Williams), their Filipino nursemaid Gloria (Marife Necesito), and Cookie (Natthamonkarn Srinikornchot), a prostitute. Their lives interact, separate, come together, so on and so forth.

In many ways the film resembles Alejandro Gonzalez Inarritu's Babel (2006) without the muscular, overexerting cinematography and ADHD editing--Moodysson is as good as his name, his camera lingering on his characters' thoughtful faces, trying to guess at their thoughts and feelings. It's a film shot in three countries (by a director from a fourth, Sweden)--a relatively large production--yet the director takes his time to tell the story properly (a commercial kiss of death nowadays), and focuses not on the exotic locations being photographed but on the people wandering these locations, lost in their own sense of alienation.

Think of Moodysson's characters as people in transit, then, waiting to arrive at their destinations. Leo is waiting for a contract to be signed; Gloria is waiting to earn enough money to finish her house back in the Philippines; Cookie is waiting for Leo to take her away to a better life. Ellen--you're not sure what she's waiting for, exactly: her husband to come home? Her daughter to realize that mommy still loves her? Everyone without knowing anything about it undergoes the same kind of suffering: an act of mid-air self-suspension, of keeping their lives on hold, of running hard in place while the world moves on, struggling hopelessly till chance events irrevocably smash the static condition of their lives.

A lovely film. Williams has possibly the most difficult role, of sketching her character's unhappiness when on the surface she has little to be unhappy about (That gorgeous Manhattan apartment, complete with balcony for her exercise bike? That pristine king-sized bed with its thick comforter and fluffy pillows? I should experience such suffering)--but suffer she does, and Williams manages to make you believe her. Necesito essays the classic role of a mother pining for her children without mannerism or irony or even a hint of self-consciousness--a straightforwardly intense performance.

The film concludes with a series of events that don't so much resolve the characters' storylines as it does shake up their respective status--they suddenly flee, shudder, change. Their responses not just affect but at times actually hurt the people around them. The ostensibly final image does not suggest a fully happy conclusion so much as it does a break, a brief breather before life goes on and the world continues spinning, just barely if ever under control.

I'd like to take the opportunity to direct a few uncharitable comments at film critic Roger Ebert's take on this picture.

Ebert writes “The film intends to make us feel guilty that such people care for us and not for their own. I don't buy that. At least in the case of the Filipinos I've known, they worked hard to win jobs over here, are sending much of their income home, are saving to bring over their kids and are urging them to get an education to help them find jobs when they get here.”

Well, kudos to the Filipinos he knows--they work hard, they contribute to both the Filipino and American economy (the former of which, ironically, seems to be doing better overall than the latter nowadays). Certainly Gloria's story is (or was, for all I know) more common in Hong Kong or in Saudi Arabia; shifting economic fortunes and immigration laws are changing the demographics of the American immigrant population--but can Ebert say he knows every Filipino and their story? Can he guarantee that no Filipino has ever functioned as a domestic helper in the history of the United States, and suffered as a consequence? From where I'm sitting, Gloria's story felt not just familiar but heartrending--I do know people like that, not all of them happy with their circumstances.

And Ebert's footnote--where in the world did he get the idea that the word “mammoth” mean “mother” in Tagalog? Someone should tell him to correct that.

I saw "Never Let Me Go" last year, when it was shown commercially at the Ayala cinemas. I thought it was slow and Keira Knightley's presence was somewhat jarring. I guess, in typical Brit style, the feelings are subdued....until the visit to Charlotte Rampling's Miss Emily late in the film, and Andrew Garfield's show of his character's frustration (framed by a dreary atmosphere, headlights, in the middle of a quiet road). The film is an improvement over the book, which I couldn't finish reading.

This is how I like my drama, Dennis--an alcohol burner with the flame turned low, low, low, until it explodes. Or never does, which is a different kind of tragedy (see Remains of the Day).