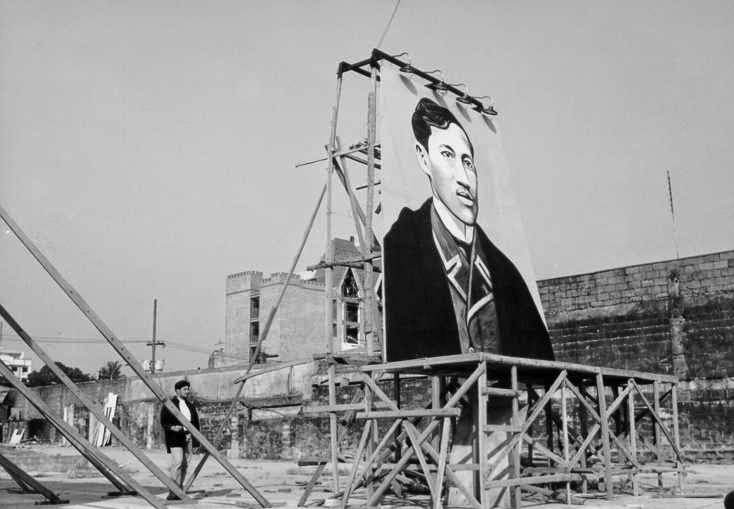 This is not a Rizal film

Bayaning Third World (Third World Hero, 2000) is Mike De Leon's long-awaited film on Jose Rizal. It took over three years to complete, beginning way back in 1996 with the announcement by GMA Films of a massive, P70 million epic starring boy-toy Aga Muhlach as Rizal. Then Muhlach left, reportedly because De Leon was taking so long; eventually De Leon himself abandoned the production, to announce that he was making his own, independently produced film. No less than three other Rizal films were initiated and finished while De Leon's  picture maturated: Tikoy Aguiluz's Rizal sa Dapitan (Rizal in Dapitan, 1997); Marilou Diaz Abaya's Jose Rizal (1998--ironically, the same production GMA Films intended De Leon to direct, rumored to have an even bigger--P120 million--budget); and Mario O'Hara's Sisa. De Leon's picture was invited--sight unseen, mind you--to the Director's Fortnight at Cannes International Film Festival (which it failed to attend). There were long periods when no one knew what was happening--the project was shrouded in a secrecy as tight and mysterious, it seemed, as Kubrick's own latest (and last) work, Eyes Wide Shut (1999).


I finally saw the finished product last week, and can personally testify to the atmosphere of electric anticipation that gripped the audience. Some eighty minutes later, when the film's end credits began to roll, an image and six words popped into my mind.

The image: Magritte's famous painting about a pipe, and its enigmatic label.

The six words: "This is not a Rizal movie."

Or, it's not a Rizal film any more than Magitte's pipe is not a pipe.

The film follows two filmmakers (played by Ricky Davao and Cris Villanueva) as they attempt to do pre-production research on a film on Rizal. The two get into endless, impassioned debates; they propose all sorts of absurdities (Rizal Underarm Spray), and make witty observations (Rizal on a devalued one-peso coin is still Number One). They interview people from Rizal's life--his brother Paciano (Joonee Gamboa), his sisters Trining (Rio Locsin) and Narcisa (Cherry Pie Picache), his mother, Dona Lolay (Daria Ramirez), his (reputed) confessor, Father Balaguer (a hilariously villainous Ed Rocha), and his (reputed) wife, Josephine Bracken (Lara Fabregas). Their conclusion (people who wish to stay surprised may want to skip to the next paragraph...though doing so may ultimately prove pointless) after much hemming and hawing basically boils down to this: Rizal's life is unfilmable. It's the long, shapeless and rather inactive life of an intellectual bum (something I concluded myself long ago, when I was involved in writing the screenplay of Rizal sa Dapitan). De Leon (with his scriptwriter and co-director, Clodualdo Del Mundo) go so far as to allow that many interpretations can be made from Rizal's life--"sari-sariling Rizal" or, roughly translated, "to each his own Rizal."

Significantly, the film lacks certain basic elements of traditional narrative film: a dramatic story, recognizable character arcs--no one is changed or transformed during the course of the film (the two filmmakers, who enjoy star billing, are named "filmmakers 1 and 2"). The last shot has the two filmmakers (stand-ins for De Leon and Del Mundo?) throwing up their hands and walking away from the project (as De Leon did, years ago). This is a Rizal movie about the impossibility of making a Rizal movie; in short, not a Rizal movie.

Possibly the single most brilliant director of the Philippines (alive or dead) and his closest and best scriptwriter have played a joke on the long-expectant--three years in the making, not to mention the waiting--Philippine public. And what a joke! A long, elaborate, multi-layered, richly allusive--drawing not just on practically everything we know about Philippine history and our national hero, but also everything Mike De Leon knows (which is considerable) about film and filmmaking--prank.

And the punchline works like a time bomb: you may find yourself laughing your head off hours after seeing the film, or--some days later--chuckling. Or you may not laugh at all; to each his own reaction to the film.

The film is stuffed with jokes and references. The structure is modeled on Orson Welles' Citizen Kane, the first twenty or so minutes a fast and funny recapitulation of Rizal's life and significance (a la Kane's life, recapitulated in The March of Time sequence); later we have interviews of the different people who knew Kane--sorry, Rizal. One shot, of a Filipino declaiming in front of a huge banner, recalls a similar one in Welles' film, where Kane is at a political rally; several times we catch the filmmakers poring over a huge blow-up of Rizal's execution--a direct quote from Michaelangelo Antonioni's Blow-Up. De Leon's favorite German Shepherd makes several appearances, gently mocking Alfred Hitchcock's tendency to make personal appearances in his pictures.

Other jokes: Cris Villanueva talking to different people and concluding that their life's story would make a better film than Rizal's; Father Balaguer's testimony of Rizal's last days in prison, which De Leon mercilessly lampoons in all kinds of ways (having read part of Balaguer's testimony, I would say De Leon manages to make fun of him without once exaggerating him). My personal favorite however would be the filmmakers' climactic confrontation with Rizal himself (Joel Torre). His replies to their questions prevaricate hilariously, as befits a true student of Jesuits ("What did you do the night before your execution?" "The Spaniards did what they had to do; I did what I had to do.").

Some reservations: despite the astonishingly wide range covered by this relatively short film, De Leon fails to bring up the matter of money--the difficulty of funding a Rizal film, or any film for that matter (De Leon's experience after the GMA debacle should have made him an expert on the subject). Lara Fabregas ruins the fascinatingly unreliable character of Josephine Bracken (did she marry Rizal, or didn't she?) with a cartoon English accent straight out of Repertory Philippines--I mean, "newbody tawks loyk that!" And De Leon blunts the sharpened point of his joke with a voiceover statement at the very end of the film--to sift through all that ambivalence and ambiguity, only to have everything cleared up at the very last second! Del Mundo admits, though, that that final voiceover is still tentative, and may be removed during the film's final sound remixing; here's to hoping they do (note: they didn't, which is a pity).

Where does De Leon's film stand in comparison with other recent Rizal flicks? I can't comment regarding Rizal sa Dapitan for obvious reasons; I do think Bayaning Third World is superior to the monumental Jose Rizal. The former in its eighty short minutes covers more of Rizal's life than the latter does in three hours, with more clarity and historical accuracy. De Leon's film gives proper--that is, primal--importance to the question of Rizal's alleged retraction, framing the issue thus: if Rizal didn't retract, then he stuck to his principles and died a hero (and heretic). If Rizal did retract and returned to the Church, then he went against everything he had written and said and died a coward (or, as I would put it, a recognizably human being). Jose Rizal's position that Rizal retracted and is still somehow a hero is, as De Leon's film so eloquently points out (without once directly pointing anything out), a complete contradiction.

I can't quite call De Leon's film superior to O'Hara's Sisa (1998); both recognize the difficulty of filming the life of Rizal, both use diametrically opposite approaches--Bayaning Third World filling up the gaps with wit and intellectual speculation, Sisa with imagination and heart. Bayaning Third World displays remarkable ingenuity in trying to make what should have been a dry historical debate lively and involving; Sisa displays equally remarkable ingenuity in trying to make a coherent and even moving historical drama out of an impossibly small P2.5 million ($25,000) budget, shot in ten days (Bayaning Third World, though I can't be sure, must cost at least P5 million or more, shot for over a year). Calling one better than the other is probably a matter of taste (personally--and I think you can see this coming a mile away--I plunk down in favor of imagination and heart). Both films, however, should be a matter of modest pride for all involved: Rizal brilliantly deconstructed on film, twice! This may not be a Rizal film, but it's a remarkable Rizal film nevertheless. 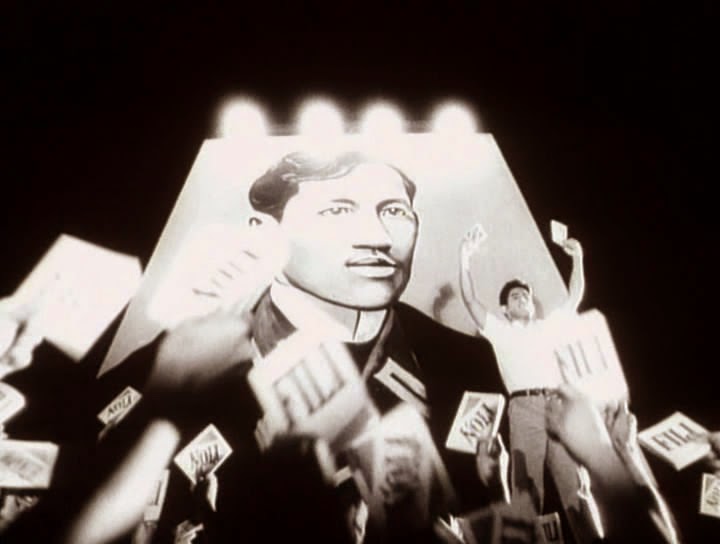