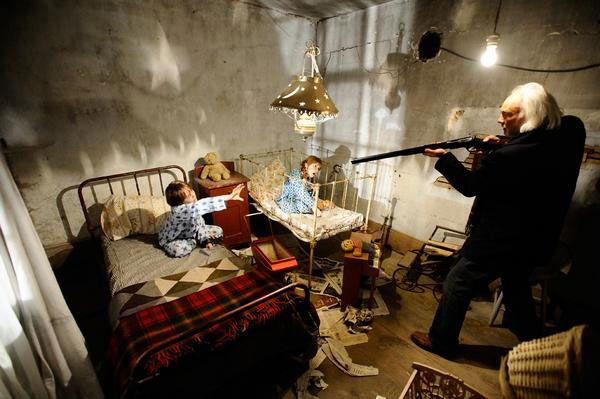 For decades George Romero's Dead films have been cracked funhouse mirrors held up to present to us our ever-changing visage. Night of the Living Dead (1968) introduced us to Romero's zombies, and his basic apocalyptic scenario: a group of survivors trapped in a farmhouse whose relations with each other--as fellow humans, as family members, as men and women--warp under the pressure of relentless siege. Dawn of the Dead (1978) was the same scenario set in a shopping mall, a deadpan (literally and figuratively) satire on consumer culture where the zombies mimicked our urge to aimlessly wander the mall floors.


The much underrated Day of the Dead (1985) was to be Romero's epic Dead film, drastically reduced in scope due to budget cuts (basically the producers refused to give him additional cash unless he brought in an 'R'-rated picture). Straitened circumstance gave rise to a radically different concept: an underground complex where officers and scientists struggle to investigate the zombie plague, their uneasy alliance rapidly disintegrating in the pressure-cooker mix of paranoia, frustration, and rising tide of undead. It's a merciless parody of the scientific and military mind both, easily Romero's most caustic work, but it wouldn't have half as much power without Bub, the scientists' most brilliant undead test subject, whose re-emerging humanity make him one of Romero's most memorable and eerily poignant characters. With Day Romero's undead series comes to a full circle: the ostensible humans fight viciously over dwindling food and resources while Bub listens to recorded music, pointedly refuses to attack his scientist master, and snaps off a quietly proud salute before going off his own independent way. At one point Bub picks up a copy of Stephen King's The Stand, as if dimly remembering having read it--not a moment involving high literature, but it's Romero's pop tribute to apocalyptic literature, to that branch of fiction on print or the big screen that deals with the truism that all things must eventually come to an end.

Day in its final form probably wasn't meant to be a final statement, but it was difficult to imagine Romero adding anything more.Land of the Dead was his attempt to do just that, and while it was vigorously directed and contained cunningly worked-in references to the war in Iraq it was basically a recycling of themes he had already tackled in Day, down to the impassive semi-sentient zombie gazing at the fleeing human survivors. With Diary of the Dead, his re-imagining of Night of the Living Dead in a meta-documentary format (a filmmaking crew abandons their horror film project to record the fall of civilization about them), Romero learned not to try top himself, but instead go small and digital--miniaturized nightmares that fill in the details in what is essentially a panoramic alternate history of America.

Survival of the Dead (2009) is Romero's latest small-scale effort--about a band of National Guard soldiers that go rogue and make for Plum Island, an advertised refuge from all creatures undead. As it turns out, the island is home to two warring families, one family believing that the undead should be finished off as quickly as possible with a shot in the head, the other believing a cure is possible and the undead should be kept (largely) unharmed.

Again Romero makes the case that the undead are basically unthinking animals rooting about for something to eat, and it's Man with his intelligence and imagination that has the capacity for true evil; at one point the soldiers encounter a band of hunters, who have just made 'sport' of their undead prey--exactly how the soldiers find out, to their horror. Later we learn that the faction ostensibly dedicated to mercy--the faction that wants to keep the undead whole and 'alive'--are just as capable of cruelty and violence as the opposing faction; doesn't matter which side they're on, it's the extremism that provokes atrocities (Middle East parable, anyone?). At one point the undead are efficiently dispatched--is this cruel? Or is it better to chain them to a mailbox, to which the undead delivers and picks up imaginary mail several times a day?

Romero's style is lean, clean, muscular; he doesn't see the need for half a dozen shaky-cam images cut together in quick succession when one lengthy tracking shot will do; he doesn't feel the need for an assaultive rock score or loud shriek effects when unnatural quiet and a shot held for an unnerving length of time is more effective. That said, there are times when Romero is capable of the offhand touch of horrific lyricism, like a beautiful undead woman riding her horse endlessly through forest and verdant landscape--Romero often feels as if he draws inspiration from current news with a generous dose of TV footage from the Vietnam War thrown in, but once in a while you do catch a glimpse of Edgar Allan Poe's restless spirit, wandering the margins of Romero's films.