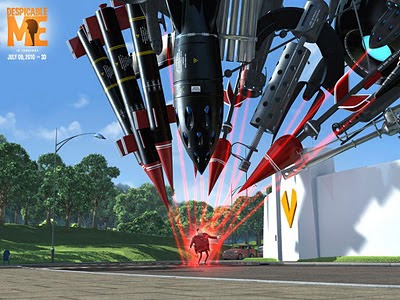 Superbad
Pierre Coffin and Chris Renaud's Despicable Me (2010) walks the delicate line between standard-issue computer-animated 3-D kiddie-caper flick and, well, yet another variation on George Eliot's classic Silas Marner (that old chestnut about a miser whose cold heart is thawed by a golden-haired orphan), neither element exactly the freshest or most exciting, and--whaddaya know?--it works.
Hard to say why; villainous protagonists seem to be enjoying some kind of mini-fad nowadays, which probably helps. Shrek was the adventures of a putative villain--an ogre with a heart of gold he insists on hiding beneath layers of sensitive, sulfurous onionskin--and the franchise is well into its fourth installment (not critically well-received, but I liked it just the same). Cartoon Network has League of Super-Evil; Robert Zemeckis did yet another version of A Christmas Carol (one must remember that Scrooge is a probable model for Eliot's miser). Coming is Dreamworks' Megamind, a Superman parody about two aliens who land on Earth and battle each other (this time it's the Lex Luthor-like figure that gets top billing).
So--there is an interest in bad guys; to be fair, there has always been an interest in bad guys. I love seeing Daleks in British uniform, serving up tea; I love it when Klingons claim "you should read Macbeth in the original Klingon!" I love it when Darth Vader stretches an arm to shattered, one-handed Luke Skywalker and growls "Join me!" (it's the only Star Wars film--the only single work to come out of George Lucas' epically self-deluded mind--that I can actually respect, even love). Truth to tell, my taste in villains tend to the grim and irredeemable ("You see, Mr. Gittes, most people never have to face the fact that at the right time and the right place, they're capable of anything." "Is this a dagger which I see before me, the handle toward my hand?"). But I can appreciate the lovable villains: bad guys with a human side just waiting to be discovered, feeling an unspoken need for a hug and a kiss, for a signal--a sign of any kind--that it's all right for them to come over and join the winning side.
That's what Scrooge--and Marner--represent; that's what Gru (Steve Carell) represents as well, basically. The pull of sentiment, of giving in to the story's gooey heart, is counterbalanced by Yarrow Cheney's witty production design details (Gru has his orphans sleep in dismantled bomb casings; Vector's living room furniture sits atop a gigantic shark tank; Gru's land vehicle looks as if an X-1 rocket plane had mated with a clothes iron; and the Bank of Evil (the financial institution of choice for cash-strapped supervillains) is "formerly known as Lehman Brothers"). There's a Spy vs. Spy feel to Gru's battles with Vector (Jason Segel) and like Prohias' strip, a sense of escalating inventiveness to the ways in which they outwit each other's gadgets (another influence is possibly Chuck Jones' classic animated short Duck Dodgers in the 24th 1/2 Century). Best gadget of all are the minions, a multilimbed, multiheaded mass of miraculously individualized yellow creatures Gru had enlisted (Bred? Created? One wonders) to do his bidding, and who speak a particularized working language of their own (not a fan of toy tie-ins as a rule, but for this picture there is an app you can download that will translate what the minions are saying).
I rarely care about voice performances in an animated picture, but Carrell's voice coming out of Gru helps his character no end--that loopy intonation with the Borscht Belt accent gives you just the right self-pitying, self-obsessed tone of an unappreciated supergenius. I especially like the moment when he has to read a children's book to the kids, and his asides drip with contempt ("This is literature? A two-year-old could have written this")--no need for fancy digital effects to make the moment funny.
Hard to say why and I don't expect anyone to agree with me on this, but I much prefer this to Pixar's more elaborate efforts, the latest Toy Story included. Why? Why, because it does what it sets out to do, and sets out to do what it can do well. Pixar has always harbored this love for Miyazaki films (Spirited Away, Howl's Moving Castle, Ponyo) that you see practically in every frame; in an attempt to imitate Miyazaki they have pushed nuance and character as far as possible in an American animated feature and as an unintended consequence shown the limitations--their pictures feel precious and not a little sticky, out not just to entertain but wring tears. The opening sequences of everything from Wall-E to Up seem designed to leap out of the screen, straddle your neck with musclebound thighs, and squeeze till the juice starts squirting.
I dislike that; I dislike being coerced to do--or feel--anything in a movie. Pixar hasn't learned Miyazaki's most basic trick--to tell a story honestly, in as unsentimental and straightforward a way as possible, so that you're blindsided into being moved.
Ironically, Coffin and Renaud seem to have realized what it is American animation excels at most: humor, plain and simple. Coffin in an interview cites the usual suspects as influences (Pixar, of course), but along with Renaud mention a crucial name: Blake Edwards. That most American of comic directors betrays his fingerprints throughout the picture--the gags explode with perfect comic timing, add to the characterization, are borderline sadistic (there's a gentleness to Pixar, I might add, that I find very hard to take seriously) and endlessly inventive. With no great need to create a great film or tell a heartbreaking story, the filmmakers are left free to make the picture as funny as they want it to be--selling the Silas Marner storyline far more effectively than if they had done otherwise, and concentrated on the pathos. Excellent fun.
First published in Businessworld, 9.2.10
at 1:32 AM

maganda ang despicable me! love the naughtiness of it. hmmm... good observation on miyaki films imitated by disney, haven't thought about it.

haven't seen this one yet, but probably will...

Interesting villains - Penguin in Batman Returns, Lex Luthor in Smallville is far more fun to watch than the Has-to-Become-Man-Yet-of Steel...

I just realized it has been a while since you offered any thoughts on American TV animation. I'm curious to know what you think of The Venture Bros. and the Total Drama series (though the latter is actually Canadian).

I have not seen anything Small.

But think about it--Batman's villains are more grotesque, more inventive than Superman's. Call them a reflection of his own twisted personality.

I loved Burton and Daniel Water's Penguin--what Dickens might have come up with if he had lived to the 20th Century and immigrated to LA. And Catwoman is even better.