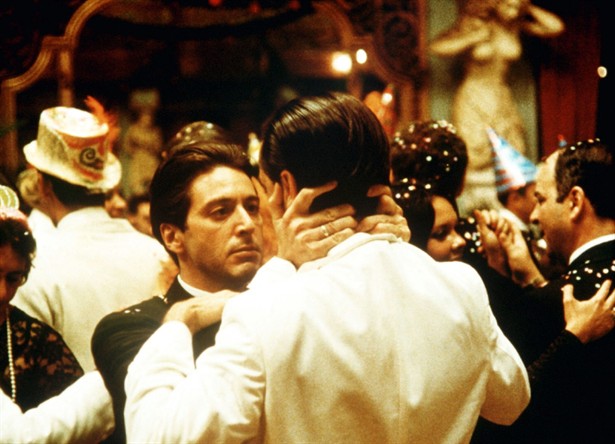 (Warning: plot of both films discussed in close detail)

I don't quite know why it is I've fallen out of love with The Godfather--is it a case of 'familiarity breeds contempt?' A need to admire something newer, fresher? Is it that the flaws have become too glaring, the virtues too faded? A perverse reaction to seeing it on top of every 'best picture' and 'greatest films' list known to Man? I don't know.

We're familiar with the genesis of the film, from a novel that at the time of the film's production wasn't a bestseller yet, but grew in popularity during production; the pressures exerted on its neophyte director (thanks to all the fan expectations) grew accordingly. Coppola recalls he was constantly in danger of being fired after the first week's shooting, and it was only after the powers-that-be saw his staging of the Sollozzo hit--of Pacino as Michael walking out of the bathroom with a calm, distant look in his eyes--that they saw something there; the possibility of a good film, maybe even a hit.

We know Coppola basically took a lurid potboiler of a crime novel, reached deep inside, and pulled out the book's true heart--a family epic that captured the mood and thoughts (somewhat dark, somewhat cynical) of America at the time. Instead of the book's pulpy pacing, he adopted a statelier rhythm, as befits a Major Production (he might have taken for inspiration Visconti's Il Gattopardo (The Leopard, 1963)--history and epic drama, in effect, told at a processional pace). Coppola had many collaborators, but two are crucial--Gordon Willis with his shadowy amber lighting (supplemented by Bill Butler in certain sequences), and Nino Rota with his swooningly sentimental score.

The Godfather may be the peak achievement of '70s Hollywood, the supreme example of their brand of storytelling, but after all is said and done, it's just, well, pretty much conventional storytelling. It has, as Godard might put it, a beginning, a middle, an end, and arranges those elements in the usual order. It uses an omniscient point of view, only zooming in to identify with characters at specific moments (say, Michael during the Sollozzo hit) the way Tolstoy kept to the conventionally omniscient point of view in his novels, breaking convention only when necessary (Pierre plotting to kill Napoleon, say).

Another perhaps more serious charge is that it glamorizes the Mafia--even their flaws (the sexism and racism, the cruelty, the cold-blooded murders) are depicted on a larger-than-life scale. This is a fairly accurate portrait (the inaccuracies--the Godfather's stance on drugs, for example--being more subtle crimes of omission and distortion than outright fabrications) warts and all, but of the overall impression one comes away with a feeling like--"Wow, I'd like to be in a family like that."

The Godfather Part II is a correction to that impression--a correction to both major objections I have to the first film. We see the ugly underside of both business and family relations, the destructiveness and decadence; at the same time Coppola attempts a more ambitious time scheme, taking the story of the father's rise, and pairing it with the son's consolidation of power and eventual isolation from anyone and everyone he knows or loves.

It's not perfect; fact of the matter is, I'd admire it less if it were perfect. Perfection implies absolute mastery over tried-and-true practices, implies a minimization of risk-taking, the avoidance and absence of imaginative leaps. Coppola does take considerable risk in attempting this scope and density of storytelling in not one but a pair of narratives, and as a result half the film--the '50s era story--tends to suffer in terms of coherence. Someone attempts a hit on Michael; the possibility is raised that there is a traitor in the family. Who is behind it and who involved takes up too much screen time--compare the plot to that of the original's first half, where we had a clear villain (Virgil Sollozzo) capable of plotting devious machinations and springing constant surprises on the hapless Corleones. Sollozzo created suspense; he managed to put the Godfather in a hospital bed, and you wondered what he was going to do next. His eventual elimination would take much of the momentum out of the film (in which case the question of succession--of who would take the Godfather's place in the family--came into play), but there's no real equivalent to the man in Godfather II.

Arguably there's no need for such a villain; Michael is his own worst enemy. One might say that Part II is basically a character study, the tragedy of a man losing the very thing he fought for--the subject of some of the greatest dramas (it's Shakespeare's favorite plotline, for one).

If the question of succession is the motor that drives the first film's latter half, Michael's conflict with his brother is the motor that drives the second film's latter half, and it's compelling enough--what does one do with the irredeemably weak, especially those of one's own blood? Mario Puzo objected to the possibility that Michael's older brother Fredo might be murdered, but that's the only direction Coppola can go. None of Michael's enemies can really touch Michael (even Hyman Roth (a.k.a. Meyer Lansky), memorably played by Lee Strasberg, is a rather ineffectual antagonist--or at least his most effective attack, assault by senatorial investigation, isn't as visually charismatic as, say, Sollozzo's hospital-room maneuver). It's people close to Michael who have the power to hurt him, either his wife Kay or his brother  (Fredo's actual betrayal wasn't much either, though Michael if were less quick-witted he would have been dead; it's the emotions evoked, of anger and betrayal, that deeply wound Michael).

As an example of epic directing I've mixed feelings about Coppola's twin achievements. He's inspired copycats through the years, of less and less subtlety and interest (Brian De Palma's Scarface comes to mind, all profanity and little substance; that said, his Carlito's Way is possibly what Coppola was trying for and failed to achieve in The Godfather Part III: an irredeemable man's attempt at redemption, done with poignancy and style). I suppose we can't entirely blame the progenitor for his bastards, though going through both films again, one can't help but notice how many of Coppola's devices, so fresh then, seem like hoary cliches now. It's a challenge to keep context in mind, to remember--and more to the point, feel--what was fresh and new back then in what is now considered old. If art has a sell-by or expiration date, this might be the basis for the establishment of such a date.

Then there's evolution--in art and not just biology. I believe that, say, Hou Hsiao Hsien's Bei qing cheng shi (A City of Sadness, 1989) unrolls a richer tapestry of changing relationships and passing time, presenting them in an atmosphere and against a delicate emotional texture that puts anything Coppola does in shadow, if not shame.

I believe Johnnie To's Hak se wui (Election, 2005) and its sequel (Hak se wui yi wo wai kwai, (Election 2: Harmony is a virtue, 2006)) both outdo Coppola in terms of plotting, action staging, suspense, economy of storytelling, and overall ambiance (a difficult-to-define combination of sentiments, from cynicism to despair to an invincible faith in man's capacity to seriously screw up his fellow man).

I believe Matteo Gorrone's Gomorra (2008) is a more persuasive, less glamorized depiction of the Mafia. And as for The Godfather films' combination of old-style visuals and punk-rock action filmmaking, James Gray's We Own the Night has set a new high water mark.

Mind you, most if not all of these films owe a huge debt to Coppola's twin epics; at the same time, Coppola's epics are not set on an unreachable pedestal, nor should they be; new filmmakers will come with new ideas, with films that speak to new times with greater, more relevant power. At least I believe these films do.

Even amongst Coppola's own works one might find superior fare, as Coppola himself might agree. I doubt if Coppola ever bettered himself in terms of action filmmaking when he did Apocalypse Now; I think he'll agree when I say he attains greater visual virtuosity and design in films like One From the Heart, Rumble Fish, even the dramatically flawed Dracula (which I consider more a celebration of old-school special effects than a straight horror film). Even a hard-to-like film like his Tetro speaks more directly from the heart, shows more integrity in its stubborn refusal to tell its story in an accessible, audience-friendly manner.

Basically what I feel about the two Godfather films is this: they work well, they're wonderful examples of understated, stately filmmaking, then and even now. But they don't speak to me with force anymore. They've run out of things to say to me (though I do feel something even now, watching them again), and everything I can say or write about them has basically been written down, somewhere else on the internet. Though I've tried through this piece to be more articulate and coherent about my sentiments, it comes down to this: I've fallen out of love with these films. They don't rock my world anymore.

I recently saw Tetro and liked it very much. After seeing it, I feel it's fresher and gripping than both Godfathers. And I like Godfather.

Noel, I guess that's why old couples cheat on each other. :-) I'd pick a different mistress though than We Own the Night. I just wasn't convinced Gray knew cops or real violence, as opposed to Coppola, wherein you can almost catch a whiff of the spaghetti sauce steaming from the celluloid. This is nice-- dissecting Scorcese, now Coppola (or The Godfather at least). How about Friedkin? I thought Sorcerer nearly outdid the original source, and watching Cruising on DVD again, it's a pretty tight, strange piece of work. I know you don't think much of The Exorcist though.

You don't think he has cops down? Some of the lines--that one about being judge by twelve rather than carried by six, I think Gray said that's straight from something the police liked to say.

I do remember that Gray does know his Russian Mafia--it's his family background, his culture.

Mainly I love it for the filmmaking: deceptively old-fashioned, but when it counts, the action's terrific--better than anything I saw in The Godfather movies.

Friedkin has his moments. French and Exorcist are okay, basically Costa Gavras doing genre, but I was really impressed by the sensuality of To Live and Die in LA, and I loved Bugs. I think that's his masterpiece. I think he can make a case for greatness, or near it, on that film.

Sorcerer--I don't know. Clouzot had some tremendous setpieces in the first one, white-knuckle, edge-of-the-seat stuff.

Guess I need to see it again. Dodo loves "We Own" as well. Maybe I missed the good stuff. I haven't seen Bugs but I've heard great things about it. Need to search for the DVD. I managed to read a really good piece about the making of The Godfather in a 2009 issue of Vanity Fair- try looking for it. It's the issue with another article about the formation of New Line Cinema. Actually yours is a pretty refreshing -or fresh- take on one of the greats. Kudos. Try to catch Cruising again on disc.

I still believe in "Everything I need to know in life, I learned from The Godfather" :)
Then again I still swear by "Blade Runner" as my life-changing film

Yeah. You know how I feel about Blade Runner and your films.